A is for Acorn, or Mali vs. Kindergarten 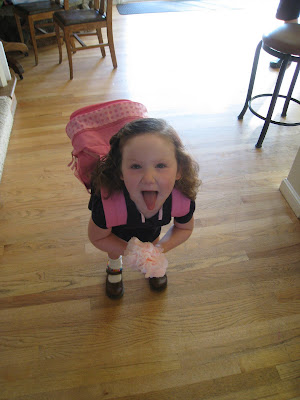 Apparently this picture would have been a more appropriate than the beaming, flower-bearing one in regards to Mali starting kindergarten.

The week before kindergarten had been such a frenzy of the fantastic & the fun that Seymour and I rarely sat down, but we did manage to keep the kids engaged, even with all of them out of school. And I thought we'd done a fairly decent job letting Mali know what kindergarten would be like: long day, mostly Spanish, one teacher, mandatory good listening. We anticipated hiccups with that last one, but not big ones.

When I picked Mali up from her first day of Kinder, the teacher said everything was fine. Mali also said she had a good time (I assume that's what "boring" meant when tossed off by our four-year-old drama queen and capped with an eyeroll). Our youngest immediately collapsed into an uncharacteristic afternoon nap, exhausted by the herculean effort of kindergartening. 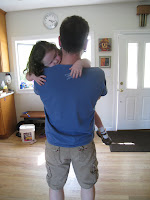 Seymour and I felt all was well with the world, so we hugged Iz and my mom, and scampered off to our four childless nights and three childless days in dreamy Lake Tahoe. I focused my worries on Leo spending six days and nights away from us, on how he was handling that change, and whether the camp aides had the communication skills to reassure him properly, or if he was having too much fun to fret.

We checked with my mom the following afternoon, and were informed that Mali was Student of the Day on her second day! School was obviously working for her, and vice versa. My mom picked up Mali directly from her classroom for the next two days and heard nothing to contrast with our visions of Mali as the best, brightest, funniest, cutest, and chattiest student in her class.

Friday arrived, we rose early, checked out of our hotel and back into reality, then tore down mountains and across valleys to arrive at Leo's camp by pick-up time. Our boy greeted us with giggles, hugs, and an an enormous, gap-toothed smile. He had a tremendously awesome time, based on both his aide's account, and the amount of dirty gear he'd amassed. His laundry also contained no evidence of toilet accidents -- not a one! What an amazing boy and amazing time and amazing staff to keep Leo that centered and engaged and yet not too overwhelmed. (His front tooth wasn't the only thing he lost, BTW. He also came home minus his beloved plushy Catbus/Nekobus, a pair of tennis shoes, and swim goggles. I don't think they have a lost & found. Damn.)

We whisked our exuberant boy to a quick lunch at his favorite Indian restaurant with just Mommy and Daddy, then took him home to spread his post-camp love glow to Iz and my mom. Leo was then so pleased to be home that Seymour volunteered to stay with him so that Mali could have a similarly parent-focused, non-sibling-tainted pickup from school. Off I went.

When the bell rang, I bounced up to Mali's teacher expectantly, and said "Hi! I hope you had a good week?"

She looked at me without humor. "Actually, I tried to contact you but I must have the wrong number," she said, "Mali has been acting out all week. She threw an acorn at me on Tuesday, she is saying 'no' when I ask her to do things, and she is encouraging the other children to defy me. I spoke to her several times but it's not helping. I need you to speak to her."

I gaped at her in shocked silence.

She continued, "It's probably the language, doing everything in Spanish. But I really need you to speak to her."

I stuttered, "I am so ... sorry. I am so sorry. My mom was here this week because my husband and I were on vacation, did you let my mom know? She told me that Mali was Student of the Day, so we thought everything was going really well. That's really not like her, I'm so so sorry."

She said, "We pick Student of the Day out of a hat. Here is your independent study packet for next week while she's away. Please speak to her."

I grabbed Mali's hand and scampered away in shame. When we got to the car, I asked Mali why she wasn't being nice to her teacher and why she was choosing to not be a good listener. "It's your fault," she said, "because you left."

Mali's maladaptive kindergarten behavior made for a great story at Seymour's homebrew-buoyed and bluegrass-grooved 40th birthday bash the next day, but I am worried. I do agree with the teacher about the challenges of language immersion, but I am concerned that Mali doesn't see why she should behave when her brother doesn't stop acting "badly" or being "mean" to her whenever he can.

I think it's time to work in some behavioral approaches, i.e., systematically and concretely tracking positive consquences for positive behavior, as opposed to slamming her continuously for negative behavior -- which tends to make her more defiant anyhow.

She goes back to school tomorrow after a week's respite in her grandparents' alternate reality/boating wonderland. I hope the break has given her time to contemplate and process the environment of her new classroom. I know that Seymour spoke to her while they were afloat, and I have been gently reminding her about the importance of good classroom behavior since she returned last night. But I am aghast and fretting, and would welcome any further advice.
at August 21, 2009