I think this drug doesn't work for Leo. And colds and poison oak suck. 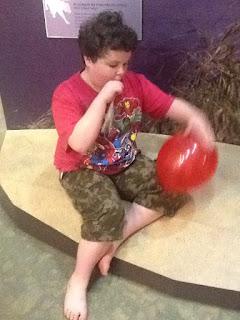 Last week's onslaught of illness and inconveniences and meds reactions and such is almost comic, in hindsight. I know plenty of folks who have more crap going on than we do and don't whine half as much, and I know specific people who don't realize how good they have it yet whine a whole lot more (if you're reading this and I know you read this, it's not you). But as this is my own, personal whining space, here goes. I'm just getting it all out so I can move on. It is essentially verbal vomit but I'm not all that coherent, and that's by my standards.

There were two codas to our loverly hike to the mushroom-and-slides park: It kicked off a horrible cold for me, and gave boss forager Seymour a gnarly case of poison oak, worst he's had in years. If you see him, coo gently. Anything louder might cause more uncontrollable itching.

The following day Leo had a dental appointment, so I drove down early to pick him up. As I arrived at his school, Iz called from her school with a migraine. The folks on her local pickup list were either having their own migraines or taking their own kids to dental appointments, so that's just the way things go some times -- I cancelled Leo's appointment and we picked her sad, aching self up (she was very grateful). My cold reached misery proportions, meaning even cold medicine was of little use.

The next day my cold miserableness continued (no stiff upper lip here just now). We started giving Leo his new med (Seroquel) in the morning as well as in the evening (evening having started four days before then). By 10 AM I had a call from the school wondering what was up with Leo, saying that he was asking for "Tylenol!" for his headache. I told them to please give him the Tylenol, and that I'd be down for a meeting with Leo's SLP by noon anyhow (that meeting went well -- more visual supports, possible formal AAC options). Leo made it until early pickup, but was still too grumpy for our usual Wednesday Costco run -- and he does not deserve to be a public spectacle. I know, he knows he's capable of great things and extended Costco runs when he's feeling like himself.

On the way home, Therapist V -- Leo's best friend in the whole world, and the only person who can really snap him out of his funkiest funks -- called in sick. (This cold, it's a bad one. I hope you don't get it. I'm still phlegm-diddly-umptious.) OK, so then I cried. But then I called Babysitter E, who said she could come for three hours later on. I'm sure I picked up Iz and Mali at some point. And after Babysitter E arrived, I tried a hot toddy and a hot bath. They did help. But even so I could hear Leo being unhappy. And if he's not happy, I can't be happy. That's how I feel about everyone in our family pod.

The next day (Thursday, just to provide an anchor) was more suckage. Leo thwapped his bus driver -- that's a milestone. The bus driver was a sport, I was not. Leo's school called again after he arrived to let us know he was extra-miserable. I once again approved Tylenol. And tried not to cry. Mali and I took on the Costco run, though in my head-congestion-fog I forgot many things. While we were waiting in front of Jennyalice's house for Leo's bus, one of his class aides (who was there to meet with Jennyalice) hung out with us, and let us know that Leo was being uncharacteristically aggressive in class. I tried not to cry again. Then Leo arrived, then we went to pick up Iz, then we dashed for our Thursday Keystone Kops episode in which I drop-kick Mali to a friend who drives down from the north and meets us at Iz's soccer field in a town halfway between our respective burghs, and I take Leo home to Therapist V, then drive back to the field to get Iz, all within an hour and I don't know if that even halfway makes sense. Mali got sent off, but Iz's coach didn't show. So she texted him, and he told her that practice was now in a field one town over. So we drove there and I drop-kicked her, then raced home already late for meeting Therapist V, who had recovered. Except Z called when I was halfway home to sheepishly tell me that her own practice had been cancelled and she showed up at someone else's practice and could I please come back and get her? AIIGH. She did apologize quite neatly.

Friday I gave Leo his Tylenol before he went to school. But I also picked him up before lunch for that neuro appointment. And before that even, I called his med doctor and asked if this med wasn't really the right one for our boy. The meds doctor said to reduce the dosage for a few days and then call him. When I arrived at school, Leo's teacher confirmed that it was another hard day for Leo but that they were all behind him (*sob*). Then we drove to the neurologist, who after a few minutes asked me about Leo's meds and when I told her he was on Seroquel, said "well, those obviously aren't working!" She also said that Leo's EEG probably wouldn't show much after he'd had Ativan a few hours earlier. She's more worried about his anaphylactic reaction than his seizures, didn't really have any advice about our current co-sleeping trade off with him other than to recommend baby monitors (which wouldn't have picked up Leo's clamminess or drooling or the other anaphylaxis symptoms that preceded his seizure, sigh), recommended we try another seasonal allergy med if Seymour is freaked out about Claritin, and as far as travel restrictions was again more worried about the anaphylaxis and recommends we not travel to areas without hospitals. She also said that it was OK for him to have nitrous oxide at the dentist's office. I'm putting that last because as hard as it was to see Leo having such a difficult time during that appointment, I held it together. But then when it came time to ask her about the nitrous oxide, I couldn't retrieve the word (I'd forgotten to write it down, and when I tried to write it down, the word wouldn't come -- I could remember everything about it, that Steve Martin huffed it in Little Shop of Horrors, that its molecule has only three atoms -- but I couldn't write it or say it or see it. So then I did cry, but not for the reasons the neuro thought I was. Sigh. (Disclaimer: previous passage is neither medical advice nor likely an accurate recollection of what the neuro said.)

So we left the neuro, and set off to Leo's favorite Indian restaurant as a reward for him getting through the appointment. The restaurant he's been going to since before he was born (and where we had his baby shower, in fact), where the owner gave him a cute outfit when he did arrive, where all the waiters started laughing when I told them Mali's real name, and where Leo decided to start eating saag paneer voluntarily. The restaurant that was barred and shuttered and gated, with a sign that they'd been unable to renew their lease and were very sorry to go. AIIIIGGGGHHH!!! AAIIIIGGGGHHH! I am still processing this one, because it's my favorite restaurant too. It's where we take everybody. Thankfully Leo was a sport and willing to go down the road for a croissant.

We went home to meet Babysitter E for our usual Friday night babysitting gig. I was excited because a dear friend had invited me to her birthday celebration. But as Babysitter E's arrival time neared, Leo's mood darkened. And it soon became clear that I needed to stay, just in case things got interesting. So I did. And things did get interesting, but not because of Leo (he settled into calmness after a couple of hours). Seymour called halfway through the evening to let me know Iz had sustained a concussion during her soccer game and they were headed to Urgent Care. She'll be fine but damn it all. Though I think she was quite pleased about being ordered to rest -- she watched about 10 episodes of silly TV on Saturday alone.

Saturday. I didn't give Leo any Seroquel at all in the morning, and only a half dose in the evening. He had a lovely, lovely day. (He also had two hikes and we spent the evening at another wonderful Disability-friendly museum day with friends like Emily and Lisa and their families, see photo above.)

Yesterday (Sunday): Half dose of Seroquel in the AM and again in the PM, and another grumpy day. Though not quite as grumpy as some previous days. I think it's time to call his meds doctor back. And I wish the research on autism and meds had some definitive answers for people like Leo, because it's just so unfair for him to have to be a guinea pig like this. He hates it, I hate it. But there's currently no other way to help him except this kind of educated trial-and-error.

This is essentially a purgative. I feel better, thank you. If the above is tl;dr or confusing, here's the short version again: I think this drug doesn't work for Leo. And colds and poison oak and concussions suck.

[Added a couple of hours later] To be clear: I am mostly remembering this with detached amusement, now that I'm not sick. But also I'm just not myself. Example: I was convinced Leo had a 2nd neuro appointment today. So I arranged for the girls to be picked up by friends. Except Leo's appointment wasn't today -- it's in a week. Which I only discovered when I called the clinic to ask how construction was affecting parking. So I contacted both parents and apologized and offered to take their kids out for treats instead after school. Which went really well! Except that while I was taking Mali's friend back home from frozen yogurt on our way to meet Leo's bus and then pick up Iz and her friend from high school, I got a call from my eldest -- it was early release day and they'd been waiting for 30+ minutes for me to arrive. Arrrgh! But thankfully they are big kids, and did not mind getting pizza later than they'd expected (Leo didn't mind the pizza, either) I want my brain back, people. I am surrounded by smart people who are able to function at top speed through all manners of things. It's embarrassing.
at January 28, 2013