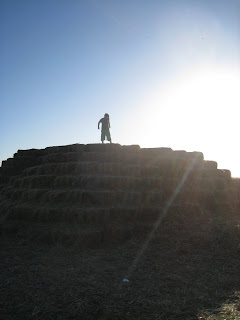 Check out this boy. I bet he's saying, "Oh marvelous me! For I am the ruler of all that I see!" While these projected thoughts mostly reveal how much Dr. Seuss we listen to in the car, my boy does rule.

His food tolerance continues to stretch and accommodate. He flabbergasted his parents three weeks ago, by willingly taking chewable antibiotics to treat an ear infection. I ran with that precedent, and bought him some chewable vitamins to see if he'd take those, too. He did! Six years of grinding NuThera vitamin pills into his rice milk, all done!

Unfortunately his food cravings -- we think it's more of a stim -- are at an all time high, and so is his weight. His pediatrician is not yet worried that he weighs 91 lbs, but Seymour and I are. More exercise for everyone, more activities to keep him away from the kitchen. Not easy as the kitchen/counter/peninsula area is our house's socializing nexus, but we'll make efforts to congregate elsewhere. Otherwise Leo thinks he gets food whenever he sees people gathered in the area.

We had Leo's annual social worker visit last week. My son did not hit her. That is a win! She did not cut our respite hours despite how well he's doing compared to last year, as Leo is still very obviously a 1:1 boy.

He is mostly cheerful and snuggly, grabbing us for spontaneous hugs and kisses, with huge lit-up smiles and giggles. He loves for us to lie down with him in the morning before he gets out of bed, and just hug. I'm normally a rather tactile-averse person, but cannot resist Leo's ever-so-sincere requests to "Lie down wif Mommy!" I'm savoring these moments, too -- I know two boys with autism who hit puberty a lot earlier than their peers, so who knows for how much longer early morning snuggling will be appropriate.

He had his first-ever full dental exam two days ago. They had no choice but to knock him out cold, and pull his loose front tooth as it was a liability for the anesthesiologist. (The awesome part: she handed me his tooth to keep, another first. He's swallowed or ignored/lost every other baby tooth.) His dentist couldn't believe what good teeth he has -- no cavities! Apparently the saying about "an apple a day" extends to dentists. He had a hard time coming out of the anesthesia, with prolonged emergence delirium, but eventually we got him into the car and took him home. Then he had a hard time remembering that he temporarily lacked sufficient balance to run rings on his beloved tactile path. By late afternoon he was just fine. 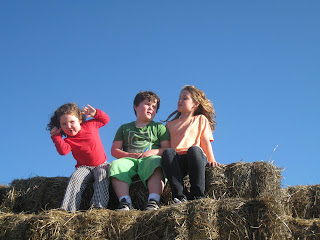 Yesterday we took him on our annual pumpkineering excursion to Bob's Pumpkin Patch in Half Moon Bay. He so loves running around with all the other kids, between the pumpkins, over the dead truck, through the cornstalks, around the goat pens, and up the hay bale pyramid. He enjoys his yearly trip to Bob's more than any other part of Halloween. And because he loves it so much, I feel the same way. Not that this will stop me from mooching candy off of his sisters on November 1st. (BTW, yesterday's BlogHer post is all about how to do Halloween -- or not -- when your kid has special needs.)