Today is my 40th birthday. If I were the type who considered such milestones opportunities to dwell upon unachieved dreams, I would moan bitterly about the very cool new kids' educational online world, Wonder Rotunda, and gripe bout why I should have been the one to create it given that I and my two Geography degrees have been creating and improving upon that which used to be called "edutainment," for almost fifteen years.

Instead, I'll pause to appreciate all the loveliness in my life, remark that contract gigs combining geography, education, and interactivity are my very favorite kind of paid endeavor, and commence with the review.

Wonder Rotunda is an online, exploration-based learning environment for kids age seven - twelvish who want to learn more about the world around them, or whose parents would like them to learn more and understand that game-like environments are very good carrots. Specifically:


"The Wonder Rotunda is a virtual, educational theme park designed to open the eyes of youngsters to the wonders of our world, much the way world’s fairs and expos did for prior generations. It is designed to get kids thinking about our world, finding things that they're passionate about, and exploring how they might make their mark some day.


"Set on an island in New York Harbor, the Wonder Rotunda’s fifteen, interactive, animated adventures cover topics as diverse as tropical rainforests, African wildlife, marine life, the human body's digestive system, money and business, American government, nutrition, globalization, film making, classical music, performing and visual arts, space exploration and, making a difference in the world. The adventures move briskly and with excitement, while affording youngsters the option of probing more deeply where they have the interest." 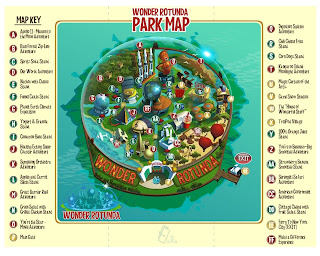 The kids explore Wonder Rotunda's many exhibits via self-created avatars (mind you, kids used to Rock Band avatars might be a bit option-underwhelmed). There's a bit of standard kid-game looking for gold coins and Wonder Dollars to keep the avatars supplied with "healthy choices" from the Wonder Rotunda food stands, or to let them shop for souvenirs, but otherwise players are free to explore the many educational exhibits and adventures, in as much detail as they like.

Parents worried about Webkinz or Club Penguin-like unmonitored social environments will be pleased with Wonder Rotunda. Though it's web-based, there are no social networking or commercial options, no advertising. And there are considerable parental controls, such as requiring parents to create their own, administrative account before the child's account can be created, allowing parents to create their own avatar so they can tag along with their kids (the Wonder Rotunda folks liken it to visiting a museum together), and the ability to browse your child's Wonder Rotunda's trail, to see where they have been spending the most time -- so you can tell what subjects they're most interested in, and encourage them to pursue them.

I have to admit, given Wonder Rotunda's squeaky-clean appearance, its earnest goals, and the home page's tour, I have not felt the need to monitor my ten-year-old Iz as she explores Wonder Rotunda. She finds WR's subject matter motivating, and has been tearing around all by herself, popping out occasionally to blurt newly acquired facts:"iguanas can fall from a height of 40 feet without getting hurt!" and decry the occasional factual error: "Thomas Jefferson was the third U.S. President, not the second, tell them that right now, Mommy!" (To their credit, the Wonder Rotunda staff fixed the error immediately. Gotta love online content.) 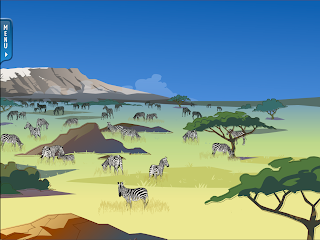 The graphics are nicely done, the content has depth (always a concern, Iz gets bored quickly), and -- most tellingly -- I had to rip Iz away from the screen so she could do her homework. This led to a debate about my priorities -- did I want to send her brain chasing after the new facts, systems, and synergies Wonder Rotunda offered, or did I want it to stagnate in revisiting concepts and worksheets it had already mastered? I recommend that you avoid such scenarios by requiring that your children finish their homework before they get to "play" with Wonder Rotunda. 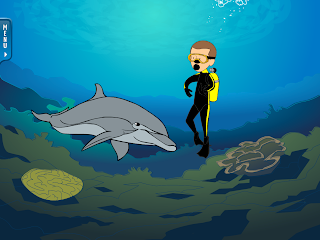 I approve of Wonder Rotunda's mission wholeheartedly. I would likely have purchased it for my kids independently, but we were gifted a one month unlimited access pass worth $12. (Unlimited access for one year is $45, and can be renewed each year for $35). If you have the kind of kids who love The Magic Schoolbus and The Discovery Channel -- or are looking to nudge your kids in that direction -- Wonder Rotunda is a safe, mentally enriching, fun place to send them.
at October 12, 2009