Whew! Jen, Susan, and I are home from 54 hours of whirlwindy autism mom Bay Area --> Los Angeles roadtripping, which we giddily tweeted via our own hashtag: #AMRT. I'll be blogging about/rationalizing our too-much-fun for BlogHer on Saturday. Until then, here are some visuals: 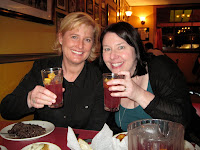 Did you know that with no small passengers requesting frequent pit stops, one can drive from the Bay Area to L.A. in less than six hours? Our first L.A. stop: Versailles Culver City! Tamales, sangria, platanos, y Moros y Cristianos. Food so good I was tempted to pick up the plate and lick it clean. 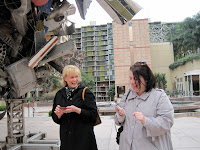 Outside MOCA, initiating a weekend of Jen/Susan Foursquare smackdowns. (I think Jen eventually did become a Mayor -- of a Union 76 station in Buttonwillow, CA.) 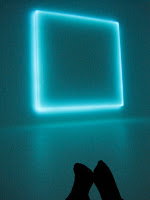 At MOCA: Doug Wheeler's ethereal, Willy-Wonka-TV-studio-style Room 669. Plus my toes! 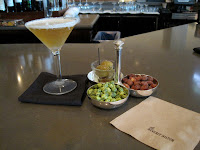 Absolutely perfect sidecar, courtesy of the Beverly Hilton's charming bartender Jose. Jen & Susan agreed, as they had one each themselves. 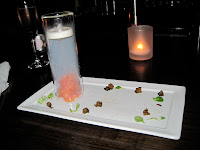 Deconstructed gravlax at my brother-in-law's new restaurant (the visiting of which was our roadtrip inspiration). The smoke-filled chamber lets you fine-tune flavor intensity. And those are fried capers on the plate -- super nom for adventurous home cooks. 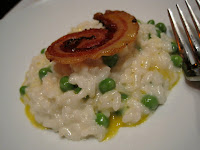 Risotto carbonara with yolk drizzle. My dinner. Beyond luscious. 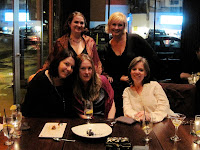 The diners (Minus my lovely SIL, who took the picture). Recognize anyone? 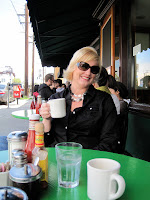 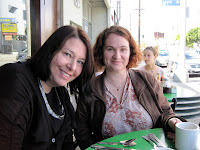 Being very L.A. and dining alfresco at Quality. Right before I found the world's awesomest dress for BlogHer10 at PetroZillia (eep!). After which we wound our way back to reality, with renewed appreciation and zest for all that our realities mean.

Disclosure: We were conscientious economy-boosting consumers, received no promotions, and paid for everything ourselves -- including dinner at my BIL's restaurant.
at March 07, 2010