Iz isn't a tweener any more -- she's thirteen now, she's passed into actual teenhood, and it's mesmerizing. I'm grateful she still respects us, talks with us, and values our opinion, and we try to take care to reciprocate. I'm fascinated by the talented, articulate, increasingly coltish girl we drag out of bed every morning. While I know not all girls her age turn banshee, I also know that I was a bitchy, self-absorbed teenager -- so it's possible things might go south or at least get distant. For now, I'm cherishing every moment.

So here's whats' going on with her.

She's getting a cell phone. Eep. I hope it doesn't lead to much more of this (in fairness, she's reading a book on the Kindle her grandparents gave her for Christmas). She does still love her science. She rolls her eyes at the thought that someone wouldn't know what "phenotype" meant. When she corrects her little sister on the fact that coral is an animal, not a plant, she is specific: it's a cnidarian, like jellyfish. She read The Immortal Life of Henrietta Lacks three times. She turned to Seymour and me after we took her to a recent Radiolab performance, with a hearfelt "Thank you for bringing me here!," and talked about the show for days afterward.

She's shadowing high schools, as that's where she'll be going in the fall. Since she was in preschool when this blog began*, that is freaky. Really damn freaky.

Soccer. She brings it. She spent a year working hard on her skills, and made it onto a team in the next bracket. (She also skunked some unsuspecting boys at school who challenged her to a match.) Her dad is supporting and encouraging and being a great soccer dad, but the gumption and drive are all hers.

There's still lots and lots of parenting, intense parenting. There's yelling. She and I are both short-tempered. We are also often contrite with each other, because neither of us stays mad once the yelling is over. When she is rotten, I tell her, "You are absolutely under my power, you need to make me want to help you. I don't have to do anything for you." When I am rotten and unfair, she spotlights every inconsistency in my argument or follow-through with courtroom-level accuracy.

She believes in fairness, justice, and consideration. When she is upset by the way some of the kids at her school diss each other, I tell her that debating someone by targeting what they cannot control, like where they live, is a weak-minded coward's approach -- and she takes it to heart. She's got the "Not Acceptable" anti R-word video on tap, and never fails to whip it out. If she thought it would help, I'm sure she'd knock on the door of every Proposition 8 supporter who dares to deny her godfather equal rights. She grumbles and stumbles with etiquette sometimes, but she also knows Hell is for Children who don't write thank you notes.

She's humble. She never told anyone at school about her or Leo being in the Apple video last March.

She's sweet to Leo -- playing Fruit Memory or other games he likes with him on the iPad, showing  him new ones, holding his hand whenever he needs it, singing to him, soothing him, taking him seriously. He adores her. She's even sweet to Mali, when Mali allows it. They'll adore each other eventually.

She's her own person. She's been a vegetarian for months, and has never wavered -- probably because she thought about it and read up on it for two years beforehand (she does miss bacon and pork bao). She loves musicals, was a Rubik's cube for Halloween, refuses to cave into my pressure about what to wear or how to cut her hair. She's got good friends, and has somehow made it most of the way through middle school without any of the drama or soul-shattering social games that were supposed to define this part of her life. 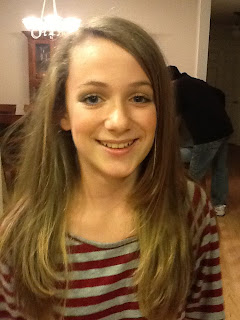 She's beautiful. She's amazing. She's thirteen. I want to remember her like this, forever.