A Case for Your iPad

A question I hear a lot, especially at iPad workshops, is "what case should I buy for my iPad?" My answer, unsurprisingly, is "it depends."

Do you just need something to make your iPad grippable and/or protect the screen? Do you need it HULK SMASH-proof? Do you want to attach to the back of car seats so kids can watch videos in the car? Do you want it to convert to a stand in both landscape and portrait mode? Do you want it to be gorgeous, and go incognito as a book? Do you want a built-in keyboard? Do you want a soft, pillow-like stand? Here are some of the cases we and our friends use, but your comments and suggestions are welcome. 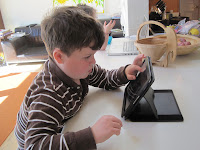 Leo has two cases for his iPad 2. Our favorite is the ZooGue* ($49.99). Leo doesn't need a super-protective case, he needs one that makes the iPad easy to hold and use, so this works for us. The leather case is nice for gripping, it has a fold-over cover to protect the screen, and it uses velcro for stand positioning -- which means that no matter how hard Leo taps the screen, it won't fall over or dislodge. When I took Leo's iPad into a local Apple store, one of the Geniuses declared the ZooGue "the best iPad case I've ever seen!"

It also has a velcro strap that can be used as a carrying handle, to secure the cover -- and to attach the iPad to the back of a car seat for multiple viewings of favorite videos. We've been watching a lot of Singin' in the Rain, Mali now works "...more than Calvin Coolidge -- put together!" into conversations whenever she can, and Leo loves singing Good Morning.

Caveats: The ZooGue doesn't stand up in portrait mode for reading books or other documents. It also leaves the corners of the iPad exposed, and when Leo accidentally dropped his iPad on its corner on some concrete pavers, the screen shattered. But now that I've regained my composure, I suspect the issue was more the pavers than the cover. 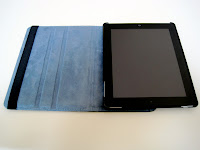 For three months after the iPad shattering incident, I was leery of the ZooGue, so we switched to a Targus 360 ($60 - $65) instead. Also leather, also nice for gripping. With an elastic strap for keeping the cover shut, and which covers the iPad's corners. 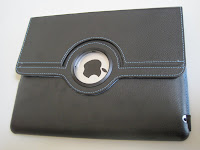 It also swivels stand position between portrait and landscape, which is excellent for those of us who like to read documents while our hands are busy. And the Apple logo peephole generally gets a comment or two -- it's a clean, stylish design. It's a good, solid case, one that a speech therapist friend uses with the kids who are her clients. 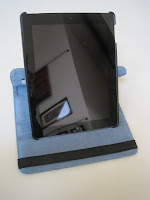 Caveats: See that pretty blue fuzzy interior padding? I have three kids. Which means that padding got grubby, really quickly -- after a while, I was too embarrassed to take this case to iPad workshops or even out in public. And the leather on the screen frame started peeling off unattractively. And while the stand does switch from landscape to portrait, it rests in a groove rather than being anchored like the ZooGue -- Leo's enthusiastic screen tapping often knocked it over.

But what if you need a substantial case, one that lets its tablet keep up with (and not become a casualty of) the enthusiasm of its owners? There are many options. Bay Area parent Laurel Miranda's daughter has worked her way through several case models, and now uses the Gumdrop Military Edition ($69.95). Laurel says,


"This case rocks, highly recommend it. The buttons are easy to push even though everything (even the screen) is encased in plastic or silicon. It's well designed. The only draw back is that the iPad is now really heavy and doesn't have a stand, but I can live with that!"

The fallback you-can-almost-drive-a-truck-over-it case is the OtterBox Defender ($89), and I know many folks who use it (including Leo's class staff). It's a bit of a PITA to put on and take off, but it does the job, and it is very popular.

Caveats: Can be hard to get on and off, can make iPads clunky or heavy.

San Francisco-based DODOCase ($59.95) makes iPad cases using traditional bookmaking techniques. These cases are gorgeous and widely coveted. When closed, you are toting 'round a lovely, handcrafted, hardbound notebook. When open, folks either oooh and aaah at the clever, hand tooled case, or quietly moan. From the DodoCase site: 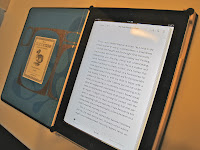 "The DODOcase cradles your iPad in a strong, yet eco-friendly bamboo tray.   The multifunctional design allows you to use the case as a stand for typing or watching videos.   The DODOcase's magnetic insert activates the iPad's auto wake/sleep feature to wake and sleep your iPad instantly."

Leo does not have a DODOcase (this particular, artist edition case belongs to his father).

Caveats: Not for kids (kids like mine, anyhow). And even your best friends will try to steal your DODOcase when you're not looking. 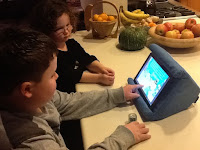 The CushPad* ($34.95) is a good match for kids who like to use tablets on unstable surfaces like couches, bed, or floors -- though of course my kids are trend-buckers and use it on the counter. It can be used in portrait or landscape mode. It is nice and soft for resting in one's lap. It has a handle for hauling around. And ... it can be used with non-iPad tablets (You're looking at a Motorola Xoom. Blasphemy! The pictures was taken with an iPad, though.) It's nice for using when multiple children are using videos, as the kids are less inclined to be grabby. 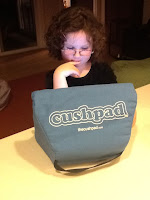 Caveats: Your tablet nestles in your CushPad rather than being securely fastened, so if the setup gets knocked about the tablet will fall out. It's big and bulky, so if storage is an issue then storage is an issue. And right now, they're selling so briskly that they're backordered -- so if you want one, I'd get on it.

My cousin and my father-in-law both have iPad cases with built-in keyboards like the one available from Brookstone ($74.99). I hate typing on an iPad itself, so if I was using the iPad for productivity or for teaching the kids to type, I'd consider this route before an accessory and therefore easily misplaced keyboard. I was pleasantly surprised by the slimness of these cases -- the keyboard adds almost no thickness.

Caveats: The keyboard needs to be charged separately, which is One More Thing. And these cases generally do not allow portrait mode, which is a bummer for some document modes.

What iPad/Tablet cases do you uses? If you use any of these, do you have a different opinion?

*The ZooGue and CushPad cases were gifted to Leo by their creators, but that has no bearing on our opinion here.