With Leo, sometimes routine trumps all. I'm guessing that's why, after almost two years of me dipping naan in saag and handing it to him, he took over the damn saag-dipping himself.


And now our boy eats spinach voluntarily, just as he does his daily dose of cod liver oil. And his diet is a rounder arena than it once was. Now we just need to help our boy with some of his own roundness. He's got that pre-adolescent lingering chub thing going on. Cute, but just on the cusp of unhealthy, according to his pediatrician, with whom he had his annual exam two weeks ago. 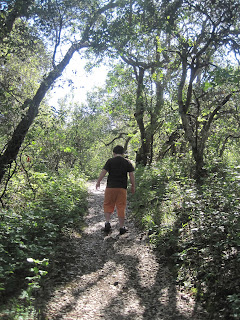 We've had weird wet spring after a rather arid winter. It's been heaven for Seymour the mushroom forager -- his secret porcini & chanterelle spots are still productive -- but local trails are only now non-mucky. Apparently local drivers' skills are changeable as well, as this is what the entire side of our parked-on-the-street car looked like when we emerged from the oaken hillside: 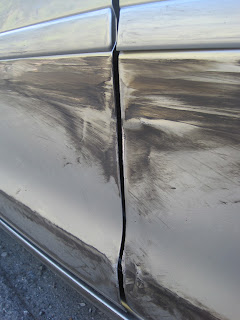 I'm driving a rental while my car's entire driver's side exterior gets replaced. Mali was less concerned about our car itself than transferring her library copy of Harry Potter and the Half-Blood Prince to the new car's CD player. Leo doesn't seem to mind driving in a different car. And I'm intrigued by this thing called "XM Radio" which lets one have single-theme channels like "Crappiest 80s Tunes." I can now blast fetid Rick Astley or painfully monotonous Nu Shooz at Iz if she and her friends try to use their iPods to flood the car interior with shallow shiny One Direction tunes.

Off to the annual school district fundraiser. I am tired. Hope you are well.
at May 04, 2012