Can a family like ours roadtrip from San Francisco to Portland and back again in 60 hours? Of course. But should we drive 1400 miles in under three days? Under the right circumstances -- and for the right people -- absolutely.

Traveling as a family hasn't always been reasonable for us. We had a long stretch in which Leo didn't do more than the occasional day trip, so unimpressed was he with the demands of going off-routine. But he's grown, he's matured, and he's now become the most patient and intrepid traveler of our group, enjoying the adventure of seeing new scenery roll by.

And SF to PDX, that is a scenic drive. Especially on Labor Day Weekend, with some of the best weather we've seen all year. And especially if you take the Redwoods route along 101.  Because then you can drive through trees!

The drive-through tree at Myer's Flat may look shredded, but I assure you it is very much alive.

This is what the inside of the tree looked like through our sunroof. You can see some of its greenery out the top.

And this is what the drive-through tree looked like through our window! You can't necessarily tell in the photo, but Leo is laughing his ass off at seeing the inside of a tree through the car window. I, on the other hand, am not laughing because the clearance on either side was less than 3 inches (finally, my background maneuvering big pickup trucks over tricky overgrown Oregon logging roads paid off!).

We enjoyed the various redwood structures, including playhouses built inside giant stumps.


But by far my favorite redwood activity is wandering among the giants themselves. The kids warmed our hearts with comments about being on the forest moon of Endor. And we saw two families much like ours who appreciated big open path-based spaces for wandering and wondering.

We also marveled at the undersides of fallen stumps, so those recent like sea creature firework explosions. 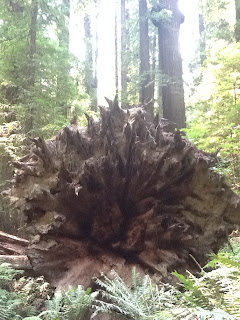 They're just so damn big! The giant below was nearly 400 feet tall when it fell in the '90s. 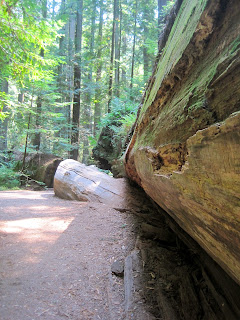 Most every part of California north of Healdsburg made us want to stop and get to know it better, more so as an acquaintance recently took his family-like-ours camping along the very same coast, and highly recommended it. We need to come back, spend a week or so -- or more -- out in the redwoods and the isolated coastal areas where a bit of happy whooping and the occasional yowl of NO from our boy won't bother other campers. But we had to get to Roseburg, OR by the first night's end. So, onward we drove. Though we did celebrate hitting the state border.

We went to Portland to celebrate a friend's milestone. And we knew they would be celebrating with a rambunctious, kid-filled party. So we asked around if anyone would want to come with us to help make sure Leo's needs were met. And guess who volunteered? My wonderful co-editor at TPGA, Kassiane. She and Leo (and the whole family) got on just ... so well. Makes me sniff tearfully, in thinking how rare and precious it is for us to hang with folks where everything (geekitude and autism) is instantly grokked. Do you know how many people will keep talking with Mali about her favorite imaginary precious metal/gem cupcakes and their variety of possible toppings after the first five minutes? Damn few. 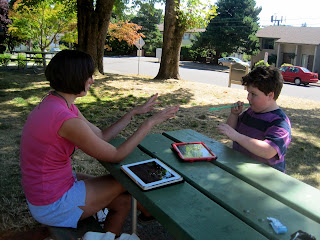 I think Leo & Kassiane liked each other, too. (Thanks so much for being awesome, K.)

Our hosts, some of our very most favorite people on the whole planet, threw a hell of a party. It aches to think how rarely we get to see them, how much we love them -- that is why the trip needed to happen. And their house was so amazing to me -- it's such an adult's house. Everything tidy, maintained, and lovingly geekified (they're both scientists). Their kid's room overflowing with Lego, books, and specimens (he's his parents' child), but ordered. Everything so distanced from Martha Stewart (bah) but so close to my mind's eye's 'real' house. Good to have goals, good to see people living the domestic dream. (I have been pulling the slo-mo version of the Augean stables on our house ever since.)

The kids wanted to stay forever, in that house of bunnies and turtles and bonsai trees and jumpy pool slides and a tree swing. I did too. Unfortunately Leo fell off the swing and scraped the side of his face. Since it's hard for him to leave scabs alone, it's still healing. But we've found he picks it less if we stop telling him not to pick at it, poor guy. And I am once again grateful that Leo is a healthy, not-terribly-accident-prone kid, because I don't like thinking about the decisions we'd encounter should he be unable to comply with treatment and recovery from a serious injury or illness. 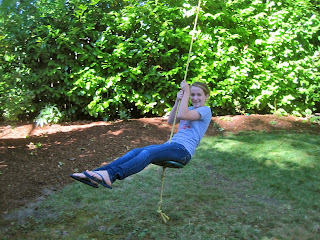 We turned around and headed back south right after the party, so we wouldn't have to do PDX -> SF in a single day. We stayed in Eugene, which always seems such a pleasant place to me. Our hotel was right alongside the Willamette's inland delta, which would normally have us all out birding -- but alas, our breakneck schedule. NEXT TIME.

Leo is a fan of hotels, too. And newly invested in piloting roller bags, which is A-OK with me. One of his former OTs remarked on Facebook that this is a good way to provide proprioceptive input, so hey.

The schedule stomped the kids pretty hard, good sports though they were.

We took the (mostly boring) I-5 route back, for expediency purposes. It was good to say hi to Mt. Shasta up close after so many years, and we chuckled at Ashland -- such a doppleganger for Sebastopol (but all we had to do to find a good coffee & sandwich shop was to stop randomly along the main drag, so, not complaining).


When things got truly flat and dull south of Redding, Iz livened matters up by defying orders and letting Mali have her first dose of caffeine. Sigh. Thankfully our youngest put her energy into READING REALLY FAST instead of activities requiring social reciprocity, as we were all well and truly burnt by then.

Does this mean our trip was easy? No. This was an exhilarating but exhausting blue moon-worthy excursion (note blue moon on the eve of our trip). My husband is a saint for coming along -- he does not share my fondness for road trips of intensest intensity, but he couldn't pass up the chance to see our friends, or the Northern California redwood & coastal scenery.

We also had the complication that Leo is currently In a Mood regarding his little sister, and cannot sit next to her in the car. So Leo got the shotgun seat, while the non-driving parent sat in the back. With this accommodation, and as long as we were mindful to keep the two kids non-adjacent at all times, things went smoothly.

Would I do it again, given the wonderful scenery and friends (and family)? Oh yes. Gratefully.
at September 14, 2012