Can you tell which player is Mali? Note that the ball is in active play. 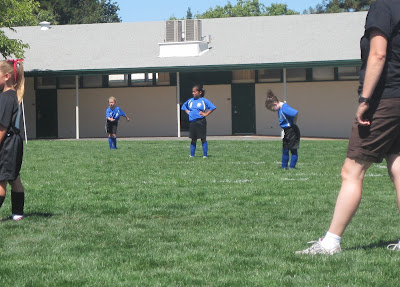 This is her as goalie. Sigh. I'm not sure soccer is her thing. She says she loves it, but this is the age (3rd grade) in which silliness stops being tolerated by teammates and coaches and other parents, even if the purveyor of the silliness can't help but put on a performance whenever possible, and finds standing around punctuated with bursts of confusing action less preferable than said performing. 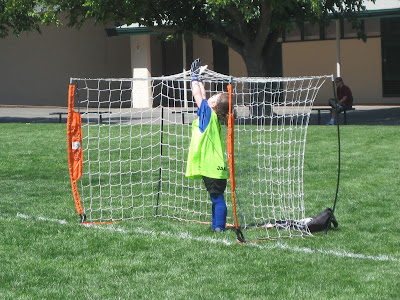 But, just today she got to perform in earnest, when she tried out for her school's play. She was required to sing a one-minute song, and act out a one-minute monologue. For the former, she chose Make 'Em Laugh from Singin' in the Rain; for the latter, Gollum's argument with himself from LOTR (she was enthusiastic but slightly tone deaf for the former, suitably creepy for the latter). The theater company is a serious one, but they also accept all actors who audition. Mali attended their theater camp this summer, and they were able to channel and guide her energy with good results.

I'm hoping it will be a better fit than soccer. I hope nothing soul-scarring happens to her in soccer.
at September 10, 2012