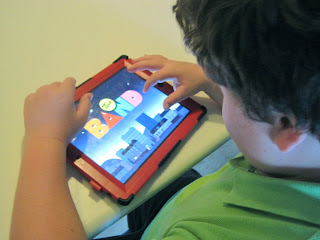 We're a family of Toca Boca fans, which is no secret -- I'm pretty sure we own all their apps, and we jump up and down every time a new one comes out. So: Yay! Toca Band arrives today!

Leo has always loved music apps, but this one is special, this is the one he's been waiting for -- as he can show you himself in the video below, which shows him diving right in, seconds after opening Toca Band for the very first time. Watch him go: 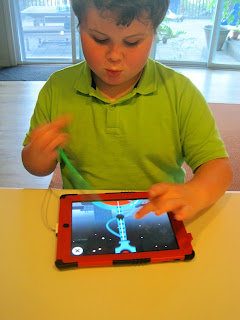 Do you see? Do you see how easy-to-use -- and fun -- and open-ended -- and goofy -- and creative this app is? Yet still structured enough for Leo to feel comfortable exploring? He doesn't need to read; he doesn't need to understand the characters' scat-style, often word-free "singing;" he doesn't need to stop and figure out how to use anything. The swipe-based selection menu at the bottom of the screen is easy for him to navigate, and to pluck characters from and then plonk on stage in different musical combinations. He enjoyed checking out all the different sounds/beats/loops, then popping the characters on the center stage star, exploring their individual percussive or vocal or musical characteristics and how they meshed with what was going on on the main stage -- and then popping right back to the main screen.

This this this. This is how apps should be designed. If you ever contemplate creating apps to delight and entertain kids -- all kids, including autistic kids like Leo -- then you need to take a long, hard, detailed look at apps like Toca Band, and start trying to understand why and how they work.

Leo's little sister Mali was waiting behind her brother the entire time he was playing the new app, desperate to have her own turn. And when she got it, she immediately started experimenting with innumerable musical combinations on the main stage, running over and asking us to listen to each one -- and they were fun to listen to, she was able to get really creative. Seeing what she and Leo could do made me itch to dive in, too. In fact the only reason I'm not playing with Toca Band right now is because I'm typing. The only reason.

The only caveat I'd give is that if your kids push back against requests to turn their iPad's volume down (ahem, my progeny), then this app is yet another argument for Apple to enable a global iDevice volume limiter. Especially if your child gets really explorey with multiple musicians and center stage percussion characters, because Toca Band makes achieving dissonance and cacophony just as simple as harmony and counterpoint. All valid musical expressions! But not ones a precoccupied parent like me is going to want to hear at top volume for hours on end.

As device volume limit is not within the developer's control, I have no problem stating that Toca Band is a fabulous app. It is a Shining Example app. It is an app that lets my son be smart and creative. It is an app Leo adored on sight.

Disclosure: Toca Boca sent me a preview code for Toca Band. But, as always (and since Leo's iPad has 450+ apps) I only write about apps that really stand out.
at September 19, 2012