Leo was out of school this past week, while his sisters were not. This was actually a great arrangement -- Leo and I got to slingshot the girls to their respective schools, and then run to the hills for a daily hike. On Monday, Presidents Day, however, our entire family had blank slates for schedules -- so we daytripped to two semi-local places we'd never visited: Calistoga's Old Faithful Geyser, and the nearby Petrified Forest. Both were ideal destinations for our family, and Leo. 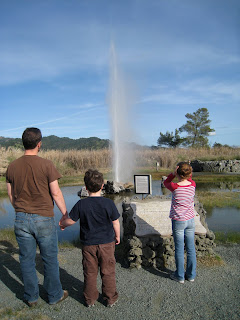 Leo enjoyed observing the geyser in action (we were lucky; it went off every 5 - 10 minutes), and learning the name of a new phenomena. He also loved running around the wide open yet fully enclosed Geyser grounds. We kept very close tabs on him, and didn't let him anywhere near the geyser's pool without holding his hand tightly. Not that the water is dangerous in temperature or chemical composition -- its surrounding pond roils with tadpoles. 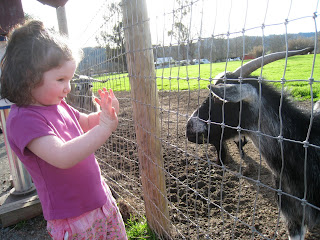 Goat, sheep, and llamas live next to the geyser, and are covered by the same entrance fee. Mali apparently speaks goat, as here she is tells one of the more enthusiastic herd members to back off. This is not a fainting goat, though there were fainting goats. It is also not a llama, though there were llamas and I now know through hand-feeding/sensory experience that llamas have bifurcated and independently prehensile upper lips. *shudder* We also got to see a one-day-old baby lamb! CUTE! 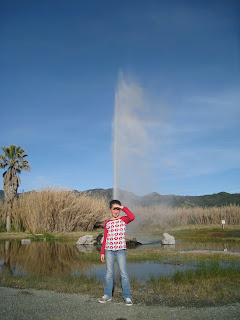 After more ruminant petting and feeding, we all wanted to revisit the geyser -- but when it started spouting from Iz's head, we knew it was time to go. Especially since it was such an awful, awful February afternoon here in California. I mean, look at those skies! *ducks* (This was written when the entire East Coast was under 10 feet of snow.) 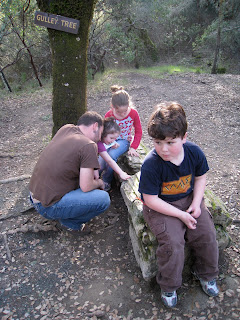 Next we drove over to the Petrified Forest, which was another great place for our whole family -- nice wide, easy, pretty trail for us all to hike, plus petrified trees for Seymour and I to get nostalgic over (we got engaged in Arizona's Painted Desert) and lecture about, and for the kids to climb on. The gift shop  was full of resources for science-minded families, including bins and bins of different tumbled rock varieties, which Leo could run his fingers through all day while we hovered and supervised; a decent coprolite selection, which made the girls laugh; and several dozen ammonites, which let Mali bust out her Dinosaur Train facts. 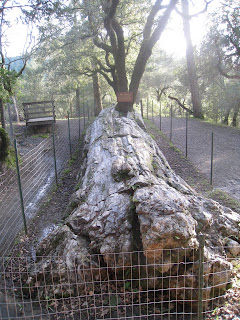 So,  yay, full-family success. As per usual, we tried to maximize our chances by going during the cold season (though the weather was warm and the skies blue), and near the end of the day, so as to avoid crowds.
Keep in mind that both destinations are smaller-scale in both size and features. We could have happily spent hours at either location, but were able to see all the key attractions in less than fifteen minutes -- so if Leo had had a meltdown and we'd needed to leave quickly, we wouldn't have felt cheated of time or money. As for that last item: both attractions have entrance fees, and neither is cheap ($10/adult, $6/kids under twelve, $0/kids under six), but since they worked so well for our family, we felt they were worth it.
at February 28, 2010