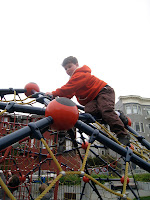 I took Leelo in for a fasting blood draw this morning. By "fasting blood draw" I mean our boy went twelve straight hours without food -- a real challenge for a kid who wants to eat the moment he awakes, cries real tears if that wish is not fulfilled, and who has recently resumed early waking.

I was nervous. Which is the short version of, "By 7 PM last night, I had developed constant chest pain, as is not uncommon with an impending panic attack."

Thankfully, our boy was brave, and the blood draw swift and smooth.

The positive outcome was not entirely a matter of luck. We kept Leo up a bit late, so he was still asleep at 6 AM when I needed to wake him. I whisked the snuggly sleeping boy out of bed, onto the pot, into his clothes, and out to the car before he was truly awake, while Seymour sneakily put together a morning meds PB&J sandwich and slipped it into my purse.

We also arrived the moment the lab opened, so as to be first in line and avoid a waiting-fueled breakdown. Leelo didn't have time to get agitated, so he only tried to pull out the phlebotomy needle once, and it only took three of us to reassure him and help him stay still rather than the usual five of us to hold him down. By the time the last blood vial had been popped off his line, even the nurses were chanting, "First needle, then sandwich."

He sure enjoyed munching on that sandwich. And I enjoyed a peaceful and side-effect free morning with Leelo, even though he'd started his day off-routine with an empty stomach and a stab.

Part of his emerging ability to tolerate unpleasant scenarios is maturity -- his kind of autism means developmental delays, not developmental stasis -- but another part is the medication Risperdal, which Leelo has been taking for just over a year. And Risperdal is the reason his blood was being tested in the first place -- last month's non-fasting and therefore less reliable blood test indicated that his blood sugar and cholesterol levels are elevated, putting him at higher risk for diabetes and cardiac issues. If he shows the same elevated levels while fasting, then we may need to switch him to another medication.

I'm not thrilled, because we went through some fairly fiery hell to find Leelo the right medication, and I don't want to risk a repeat. But I'm also not surprised. Though a very low daily dose of Risperdal brought Leelo (and, so us, his family) almost an entire year of relative bliss, we're starting to realize that the drug's effectiveness is fading. He's slowly resuming the challenging sleep patterns of his first eight years, and he's starting to have less patience with adversity or the unexpected.

We know why the Risperdal is becoming less effective. He has grown a lot, gained a lot of weight over the past year, while his dosage has remained constant. But neither we nor his doctor want to raise his dosage, as it could skew his blood sugar level even further, it already makes him hungrier than usual, and we don't really want to find out what lies beyond "constantly, desperately ravenous."

What will our options be? Most other medications in Risperdal's class of antipsychotics have similar potential side effects. The best option so far seems to be Seroquel which usually brings more sedation and less weight gain, and is usually fairly effective in terms of stabilizing mood. Another occasional choice is Geodon. It's weight-neutral. But it can also change blood chemistry and electrocardiogram readings, so we'd have to do periodic EKGs -- not something Leelo would likely submit to.

Another option: sometimes when kids with autism have intense behaviors or stims, they are rooted in anxiety. The anti-anxiety drugs typically prescribed to kids like Leelo are SSRI meds like Zoloft or Prozac. Their side effects are usually not significant: sleep disturbances or increase, appetite increase, stomach upset, headache, and very occasionally they have the opposite of the intended effect.

They're worth considering, because Supervisor M thinks Leelo's lingering, cycling, currently escalating, and always present stim behaviors -- which at the moment include raspberry-style spitting, repetitive slapping of or stomping on hard surfaces such as car interiors or wooden floors, needing to slam the toilet seat several times after each potty drop, and spinning -- are actually an OCD or anxiety manifestation. 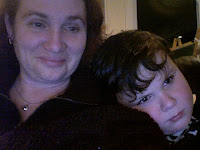 I have to admit, I'm bummed that we're having to consider switching Leelo's meds at all. He had such a great 2009, and I took none -- none! -- of it for granted, as his late-2008 Abilify-generated tantrums and violence were one of the worst periods our family has ever experienced. I am grateful to Risperdal every time I'm able to sit down with my son and watch even 15 minutes of a movie or video, if he also puts his head on my shoulder, and for the 90% certainty that he won't randomly turn around and punch me. Even though his behaviors are ramping up and his sleep is eroding, I'm still loathe to make any changes. What if it doesn't work? What if things get worse? What if, what if?

We won't know what path to take until we get the Leelo's blood test results back next week. But any interim input, opinions, experience, or citations are welcome.

Disclaimer: Don't rely on me for medical advice, duh! Also, I know plenty of people whose kids had positive experiences with Abilify. Just not -- really not -- my son.
at February 04, 2010