My Baby Rides the Short Bus: Our KQED Forum Interview

One of Leo's autism symptoms is delayed processing -- he often needs a couple of beats to respond to a situation, to sort through input and respond appropriately. Like him, my processing is often delayed, which is why it's taken me several days to mentally untangle the onslaught of awesomeness and emotion from last Friday's My Baby Rides the Short Bus events: our KQED Forum interview, and our Modern Times reading.

The radio interview with me, Jennifer Byde Myers, and Sarah Talbot (one of the three MBRTSB editors, who had to call in as she was mid-road trip) went well, I've been told -- I still can't bring myself to listen to it. The studio was cozy and intimate, which made it easy to forget that our conversation would take place in front of thousands of listeners. Jen and Sarah were naturals, on fire, and so well informed  -- plus Jen was supernaturally quick-witted and charismatic; someone needs to give that woman her own talk show. Here's the full episode:

Dave Iverson was a deft moderator, insightful and thoughtful, and I took notes on his methods for August's BlogHer autism panel. He started the interview with a quote that was not actually from the book, in case you were wondering -- it was from my BlogHer essay You May Approach the Short Bus. That was cool.

Here's what I remember about my participation: I tried to forget that I was on the air, to follow the threads as they emerged, and just have the same conversations we have whenever advocacy come up -- agreeing with Jen and Sarah that having kids with special needs doesn't make us perfect moms and doesn't make our children special angels -- it's not something we chose, even though we're damn good at it. I restated my good fortune in finding a friend like Jen, which prompted Dave Iverson to muse that we all need our own Jennifers (our friends on Twitter agreed). I made a plug for fully funding IDEA and then remembered I was on the radio and stumbled over the acronym (Sarah and Jen helped me out). I choked up about parents of typical kids who think kids with special needs are educational funding parasites. I revisited the dreaded Costco incident, and my helplessness and the other shoppers' seeming indifference during Leelo's raging public tantrum. We talked with callers about finding services for our kids and community for ourselves. I told listeners that I'd like them to focus on the beautiful nine-year-old boy underneath my son's autism diagnosis.

When the interview was over, Dave Iverson seemed touched, and said that he had skimmed My Baby Rides the Short Bus beforehand, but now wanted to read the entire book. Jen and I told him to either go at it slowly, or to get a glass of wine. MBRTSB is important reading, it's revelatory reading -- but it's not light reading.

And now I know how many of our friends listen to KQED at 10AM - a lot, because they emailed and tweeted and called us! It was too bad that the other two My Baby Rides the Short Bus editors, Jen Silverman and Yantra Bertelli, weren't able to join the KQED interview -- but if you want to know some of what they have to say, check out last December's My Baby Rides the Short Bus BlogHer Interview with all three editors.

After the interview, Jen and I waltzed across the street to Coffee Bar, where we enjoyed satiny-sweet Havana lattes and thought that perhaps we had just said important things about kids like ours to people who needed to hear them. It was a nice feeling. Don't we look like we we're feeling nice? 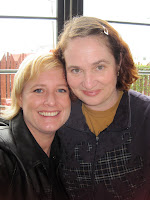