Leelo and the Children on the Merry-Go-Round

Leo has socializing opportunities aplenty -- around town, with all the people and kids who come to visit and swim and cook with us, during excursions. But those interactions are all heavily managed, to help him avoid sensory overstimulation, and so he won't pull a frustrated HULK SMASH on me, his sisters, or unsuspecting passersby. It breaks my heart to write this, but: he is not a free-range boy, not in scenarios where other children are running wild. It's too risky.
So when he asked to "go play, play with the kids" who were swarming the merry-go-round at Franklin Square playground today, my initial reaction was no. HELL NO. Not just because Leelo is unpredictable, but because -- as I suddenly realized -- I don't trust other children to be kind to him.
But he wanted to go. He was desperate to go, to be part of the puppy pileup of his-aged kids. He kept saying, "Want to play, want to play!"
Ours is a boy who rarely asks to play with other kids. How could I say no?
I said yes.
Off he ran. He dove straight through the outer ring of children, and positioned himself in the center of the merry-go-round. I stood nearby, reminding myself to breathe, ready to spring, explain, apologize.
I never had to.
The other children accepted Leo at their center, without question. No one said anything, or gave him funny looks, not even as he his siren-like crow of delight grew louder as the kids spun faster, faster, faster.
Look at this ecstatic boy-in-the-middle: 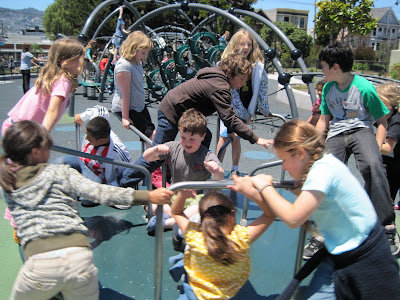 I'll be watching this video on YouTube nonstop for the next 48 hours.
Parents, if any of those children belong to you, please give them extra hugs from me. They're amazing.
Today was Leelo's first day of summer. I hope it has set the tone for the next two months.
at June 17, 2010