Once Again: I Couldn't Be Prouder!

Our family spent the morning hanging out with a very nice person who had never before met my kids. I tried to caution this person about my kids beforehand (all three: charming/intense/girls can be rotten). I tried.
The girls decided to have an analog chat session while we adults and Leo were interacting. I was proud of Iz and Mali for being so independent, and calm. While we were gathering our things to leave, and while I was briefing Leo on our next few moves, The girls handed their chat session to our companion --- and insisted it be read before we parted ways.
Our day was a non-stop whirlwind, so I didn't get a chance to read their efforts until we returned home several hours later. Which was a good idea, because when I just about fainted I could do so on my own couch and not on the concrete floor of the Ferry Building (later, when I can tell you who we were hanging out with, you will understand).
Here's their transcript: 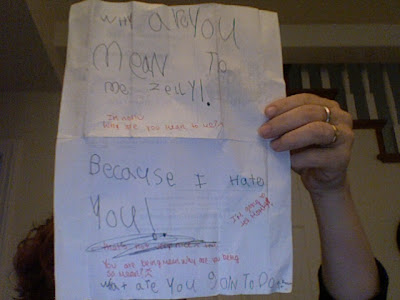 And here is what it says (Black = Mali, Red = Iz):
Mali is five. Iz is eleven. Which one of these girls has the upper social manipulation hand, do you think? We need to smother Mali with positive behavior examples and reinforcement, I think, so she doesn't end up falling in league with Bad Horse.
Also: I really shouldn't go within a mile of SF's Isotope Comics  -- the owner James is too charming,   engaging adults and kids with equal enthusiasm. But now I have Marvel: House of M, which is on the list of Marvel background reads my friend Skye insists I cover before going anywhere near Secret Invasion.
Also: Screamin' Mimi's in Sebastopol has Maker's Mark ice cream. The flavor is perfect, and made me feel like I was tippling mid-day -- almost as good as the real thing on a long, road-tripping day with all three charming/intense/rotten kids in tow.
Also: My article on Leo & his iPad was written up on MacDailyNews. That's cool, right?
Also: Keep reading The Thinking Person's Guide to Autism! Incoming essays from Christa Dahlstrom, Kim Wombles, Squillo, and many more.
at June 18, 2010