Leo on a Boat 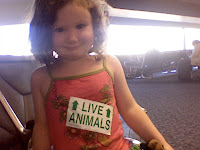 This is mostly about Leelo because DAMN OUR BOY SPENT TWO NIGHTS ON A BOAT but he does have sisters and they did come on the trip (though Iz spent a lot of time sleeping, fishing, snuggling with her grandmother, and reading and re-reading Castle Waiting, American-Born Chinese, Erec Rex #3, etc.). Here's Mali at SFO, in the departure lounge. She put on the Mali Jane Rosenberg show at the ticket counter to such effect that the agent let her weigh herself on the luggage scale, then slapped her with a warning label. (This same girl is now in Victoria, B.C., as I type, where -- according to her father -- she has been earning money busking on the waterfront, as a juggler's assistant. Auntie Bree is said to have video.) 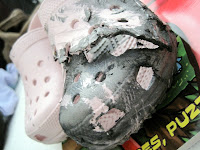 Mali also entertained the entire staff and back rows of the plane during our flight. We sat next to a family from Puerto Rico, so Miss M turned up her Español and charmed them en dos idiomas, especially with Fifa Copa Mundial lore and exclamations. She was still flying high on the day's cumulative attention when the escalator at SeaTac grabbed and chewed up her brand-new crocs, and sent her tumbling backward down the steps and into me. Thankfully only her dignity was injured. And now you know, Crocs & escalators & shredding? Not an urban myth. 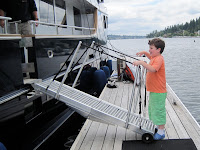 By the time we filed the obligatory Croc-escalator-chewing report at SeaTac and returned home, it was almost midnight. Which did not stop Leo from wanting to get on the boat and GO GO GO NOW. But he was a good sport about waiting until I found Mali a replacement pair of Crocs (at the downtown Seattle REI fern grotto/oasis, ooooh!) and everyone else woke up and we finished loading the boat. Then: HAPPY BOY! Look at that smile. He was ecstatic. 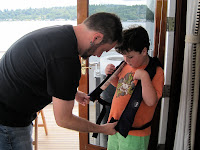 He was also a good sport about wearing his lifejacket the entire time. I am telling myself this is because of the "going on the boat" social story I made for him before we left. 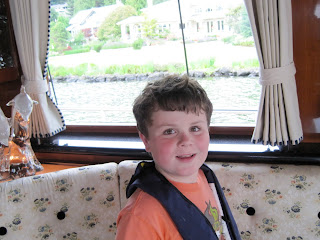 Such a thrilled boy! He's on a boat! 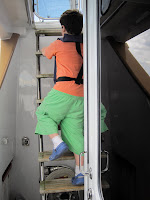 There was much exploring to be done on the boat. It has multiple decks, which was good news for a boy who likes to climb and run around. He even established an around-the-boat circuit which was helpful on the 4th of July when stereotypical crappy Seattle weather decided to assert itself and we were mostly stuck inside. Though as we were the tallest boat in Lake Union, I was mildly irritated by my boy being on display for the beer-drinking yahoos on the surrounding boats -- yahoos who did things like trying to tie up to our anchor line, or flashing Seymour while he was innocently trying to grill burgers on the back deck. A good hashtag here would be #notsailors. 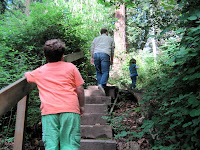 We were lucky in that our boat had a tender, a smaller boat that we could use to go ashore if we wanted to. And we did, the first day to Ivar's seafood in Renton (very tasty, though not quite up to our own Al's Fish n Chips here in Deadwood) and then hiking in Seward Park (picture), the second day to the Lake Union Wooden Boat Festival -- which was awesome in terms of boats, food, music, and displays. Seymour said Mali befriended one of the master canoe makers while Leelo, Iz, and I went on a green straw mission. 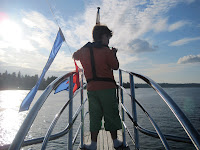 Here's our boy, glorying in the wind and water. He is standing on the pulpit, which is a high-dive like platform at the front of the boat, suspended about nine feet above the water. It's a great place for a sensory-seeking boy. Notice the extra horizontal rails that his grandparents insisted on -- normally a pulpit only has one or two rails, but his grandparents designed this boat for their entire family, and that includes the grandkids (...not falling into the drink). And now that includes Leo, too. His grandparents were so, so, so, so pleased by how well our boy did on the boat, praised him and encouraged him continuously, and are willing to try an actual journey next time -- perhaps to the San Juan Islands. Can you imagine? :D Leo would *love* it there! Water and hiking trails -- heaven. 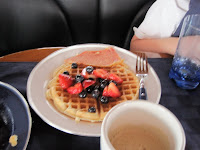 Seymour's folks and the boat staff spoiled us rotten, which was surreal but appreciated -- we'd had a rough previous week. We woke up on the 4th to fresh patriotic waffles, which our entire family got to eat together, up in the pilot house (main bridge, too busy eating to take pictures other than this one). Leo ate his own waffle and most of mine, too. Hey, eggs are protein and his diet is still mostly that of a self-imposed vegetarian. Anything with protein is good, because meat in any form still makes him retch. 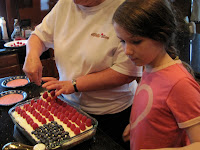 See, Iz was there! She and Mali helped K. make this scrumptious, also patriotic cake. I asked K. to hide the cake from Leo, who enjoyed his piece immensely (though as he ate it he picked off the raspberries and shoved them into my mouth whether I was ready or not), but K. wasn't quite used to how observant and wily our boy was, as he found it in five minutes and the cake had to be relocated. She's a quick study, though -- Leelo never located a single crumb of food on his own after that. 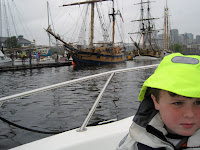 He did get a bit grumpy/cabin feverish near the end of the afternoon on the 4th, so S., the first mate, took my boy and me out for a Lake Union cruise in the tender (and also in the rain, as you can see by Leelo's geer) to see the boats at the Wooden Boat Festival from the lake side. He cheered up a bit but mostly, I think he was just tired. He didn't get enough sleep after our late arrival on the first night, and he had trouble going to sleep the first night on the boat (exhaustion, disorientation; though he woke up with a big grin). 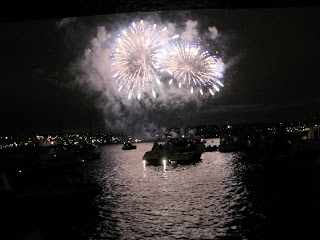 So, Leelo missed the Lake Union fireworks because he put himself to bed long before 10 PM. But that's OK. 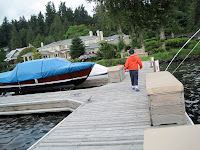 We didn't stay overnight in Lake Union, as the crew would have needed to spend the entire night on idiot patrol to ensure that no other boats bashed into us. Which meant that when Leo woke up the next morning, we were back in front of the house. That made him very happy, much as he loved being on the boat. 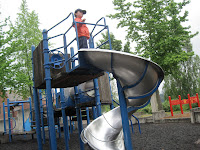 As usual, Leo got up earlier than everyone else (though still fairly late for him -- 7 AM) so we headed out for caffeine and playground as soon as I was dressed. We headed for Luther Burbank park at the north end of the island -- gorgeous, and the playground is still semi-old school, even partially constructed of brick. I think Leelo was missing the boat pulpit in this shot. No worries, my friend --  next year! 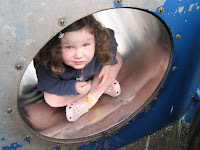 (Mali wants you to know that she woke up early too. And came to the playground too.)

Conclusion: Yay Leelo, and yay on his grandparents for taking a chance on our boy -- they really were so tickled to see Leo thriving on their boat, and have their all-the-grandkids dreams fructify. Two years ago a trip like this was inconceivable. I am overflowing with gratitude for all the good luck and hard work that brought our family to this point.