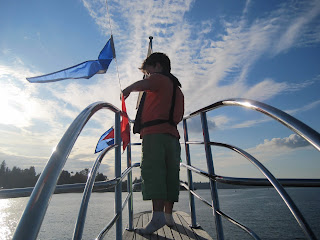 Yeah, Leo liked being on the boat. So much so that we're both completely tuckered, especially as the boat travel was capped off by today's day of Leelo + mom air travel, a day that included a one-hour flight delay which  wasn't announced until we were at the gate, and kept creeping forward in 15 minute increments so that we couldn't leave to get more food, but I also couldn't give Leo the cookies I was hoarding because I'd already told him  he could have them when the plane was in the air. As I told Miss Grace on Twitter, "dysregulated" is autism or sensory processing disorder parenting code for "my kid lost his shit." But  you know what? Everyone on the plane was kind and understanding; the folks in front of us even congratulated Leelo for "doing a good job," by which they must have meant not losing his shit altogether. Not our boy's fault. And he did do *so much* better than he has in years past. Can't you tell I'm zonked by the way I'm running on and on? Real boating entry tomorrow after I've had a few hours of sleep. But not too early as I have three or four meetings tomorrow.
at July 07, 2010