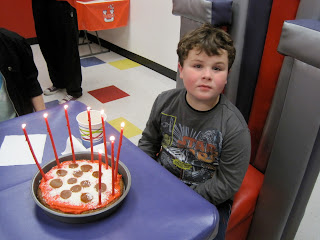 Look who's ten years old today! Doesn't he look handsome like his dad, and skeptical like his mom? I'll have to start telling him he's the world's most handsome boy instead of the world's cutest, because ten-year-old boys do not appreciate their mothers pinching their cheeks and clucking at them. Leo is no exception.

He had a fun bouncing birthday party, with many of our favorite people and families -- including several of his new classmates and their equally wonderful families. It was delightful. The picture above is him at the party, about to blow out his candles. 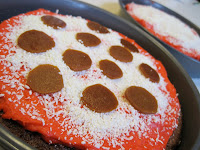 If you needed a double-take, let me reassure you -- that's not pizza, it's cake. A very symbolic cake. A cake that the party facility owners almost blocked because non-cake outside food is prohibited. A pepperoni pizza cake*. Which we made for him because, as of Halloween, he now eats pepperoni pizza! (And garlic chicken stuffed pizza, though its confection version is less striking.) Our lifelong vegetarian-by-choice boy is finally going to get some protein from non-legume, non-dairy, non-egg sources! 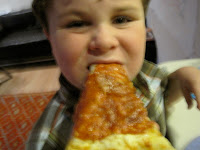 Why the leap to pepperoni, after a lifetime of gagging at the smell of meat? I do believe part of it is maturation. But mostly, I credit Judy McCrary Koeppen's, Leo's former SLP, and her guidelines for picky eaters. We used the idea of "food chaining" during more than a year of weekly pizza nights: first we got Leo to nibble on the pizza crust,  then on crusts with a bit of sauce, and then crusts with a bit of sauce and cheese (that took the better part of the year). And then suddenly he was demanding pepperoni pizza on Halloween. Was it a fluke? No, because this nomming picture is from the first weekly pizza night after Halloween, when he scarfed two pieces of the pepperoni stuff. You can see the nomming yourself in this video, which Seymour says is shot in PizzaCam. Our boy is a genuine pepperoni pizza convert (and spinach pizza, too).


Leo's pizza love means a milestone for the rest of his family, too. When we went out for pizza on the night of Leo's birthday party, Seymour noted that it was the first time ever our entire family ate the same thing for dinner. First time ever. Ever.

Our boy is not in stasis, that's for certain. I am hoping for more positive surprises and more happiness for him during this, his eleventh year on our big blue marble.


HAPPY 10th BIRTHDAY LEO!
*In case you were impressed by my creativity, know that I used the guidelines from the first Google hit for "pizza cake." Though I substituted healthy-ish carrot cake with cream cheese frosting, and used apricot fruit leather for the pepperoni.
at November 09, 2010