This post is for the wonderful parents, educators, family members, and professionals who ask me, "What are the best apps for kids with autism?"

We all know that each child with autism has unique needs -- but if Apple's iPad fairies were to bring Leo a brand new blank iPad, the apps below are the ones I'd stock it with. (Note: I've written about most of these apps before, but not as a collection.)

Stories2Learn
Social stories help Leo with new transitions, situations, and reinforces challenging routines. I can make a social story in about fifteen minutes, once the pictures are loaded on the iPad. The interface is easy for Leo to use and he loves seeing stories about himself:


iCommunicate
Leo enjoys making his own icons and doing the voiceover for them; seeing those same icons used in scheduling storyboards is reassuring for him. iCommunicate is very much Leo's speed; since he speaks "fluent requesting," we have not spent as much time with the more category-driven AAC (Augmentive and Alternative Communication Strategies) apps like Proloquo2Go (though I'm exploring P2Go), iComm, AutoVerbal, TapToTalk, and MyTalk.

First-Then Visual Schedule
A digital visual schedule instead of spending hours printing, laminating, cutting, veclro-ing? Yes please. Though I am hoping for a more category-driven interface in future versions.

Look in My Eyes - No longer recommended. Autistic people often find eye contact painful and unnecessary.
Recommended by Danielle Samson, an SLP at Leo's school. Numbers flash on models' pupils, then your child identifies those numbers from a field of nine. Bonus: Leo thinks it's fun. The goal is to support connected gazes.

iEarnedThat
Use your own pictures to make puzzle-based goal charts. Leo doesn't quite get the goal part, but he loves putting the tap-based puzzles together -- the more puzzle pieces (you set the number) the better.

ShapeBuilder
Leo's current go-to app. Drag puzzle pieces to make a shape, which then turns into a picture -- and you get cheers! The app sucks in your pieces if you get close enough, so it's easy to succeed. Visual memory kids like Leo, who can match puzzle pieces to shapes, can become real speed demons with this app.

FirstWords
Another Leo favorite [video]. Drag letters into slots to form words. Each letter is called out as it falls in place. Then the word is read aloud. You can't put a letter in the wrong slot, which is really helpful for Leo since he's still learning to sight read.

iWriteWords
Handwriting and spelling in one well-designed, intuitive app. The user can choose to practice on words or letters, in uppercase or lowercase. I love this for Leo because he can't go outside the "lines" [video] -- he's guided to form letter shapes correctly, and then words are spelled using the letters he just wrote.

FruitMemory
A Concentration/matching app, which is great for Leo as he's got that stereotypical autism keen visual memory. While Leo enjoys Concentration apps such as AnimalMemory ($ free!) and Jirbo Match ($4.99), I like Fruit Memory the best because of the multi-player option that helps him learn turn-taking, and lets us play the game with him. Bonus: super-nifty design.

Supernova
An ambient app that lets Leo focus on expanding and contracting a celestial cloud -- while practicing the pinch/unpinch iPad fine motor skills movement that kids like Leo find challenging.

DrawWithStars
Leo likes drawing lines with this app's musical spinning stars [video] -- they're motivating. And then he gets to indulge his OCD tendencies by methodically retracing his steps and making the starts spin off screen -- an exercise in manual precision that is also good for honing fine motor skills. 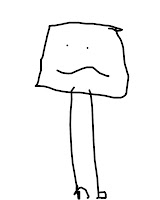 A very simple, free drawing app -- perfect for a boy like Leo who finds it much easier to draw with his finger than with a pencil, crayon, or stylus. His creations are too much fun -- we've never had unprompted goodies like this square guy before, not outside the iPad. You can also import photos and draw on them, which Leo thinks is hilarious.

Faces iMake
A whimsical collage app and free-form creativity unleasher. I was worried that the interface would be too complicated for Leo, but he skips between options with ease [video].

TappyTunes
Leo loves music and sings all day long, but at the moment he's not quite ready for independent extended sequences or instruments. TappyTunes plays Leo's favorite tunes automatically -- but he controls their rhythm and tempo, demonstrating how well he knows these songs! The only drawback is the text-based interface -- I have to help him select songs since he's working on his reading.

Fruit Ninja
Leo is sitting next to me right now, playing this quick-draw fruit-slicing app (he prefers the bomb-free "Zen" mode). His choice. 'Nuff said.

----
Additional Resources:
Disclosure: This post was written as a resource, and was not sponsored. The opinions on these apps are entirely my own -- each app was was selected because, in my experience, they best suit my son at this point in time. With the exception of SuperNova -- a 99 cent app that was gifted to us by its developer -- I either purchased each app myself, or downloaded it for free via the app developer hub MomsWithApps.
at November 02, 2010