Leo has had his iPad for six months now. It's hard to imagine our lives without it, honestly. What did we do? What did he do? (A hell of a lot more advance planning and materials set up, that's what we did.)

It's not that Leo uses his iPad all day long -- he does plenty of hiking and puzzling and snuggling and hanging out and working and playing and doing chores -- but the iPad really helps when Leo needs self-directed distraction, or engagement, especially during the kind of activities or errands that a typical kid would be expected to tolerate, and which have historically been challenging for our boy. Here are four iPad-made-easier Leo scenarios from just the past five days. 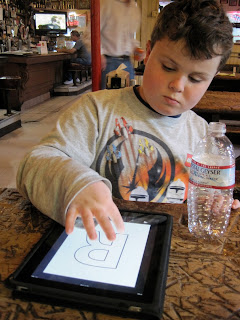 Waiting during sisters' activities
Just as his sisters have had to wait during Leo's various therapies, activities, and appointments, he sometimes has to wait for theirs. But this waiting hasn't always been easy for our boy, especially during his traditional winter grumpiness -- In the past I often begged off waiting on the sidelines, then piled unhappy Leo and his spare sister into the car so we could drive around until pickup time. But here's Leo contentedly hanging out at the restaurant/pub next to Iz's new soccer practice field, playing Letter Tracer. We made it through her whole practice, no problem. (Locals: guess our location!) 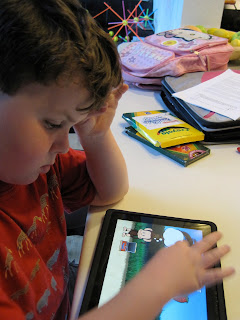 Sister homework time
A time when tempers have been known to flare, if three kids are clamoring for attention and needing keeping-on-task, and two of them are possibly whining and making excuses. Since Leo can now navigate his iPad & apps himself, I check in with him occasionally (he does have autism, he has been known to perseverate on certain apps, like Monkey Preschool Lunchbox, pictured) but I can now give his sisters 95% instead of the previous 50% - 70% or my attention. 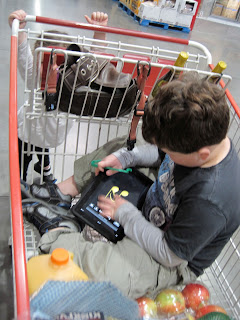 Costco Runs
Sometimes our boy's not in the mood for Costco. I understand; I'm not a fan myself -- but our weekly runs are part of our family schedule, and there are complicated consequences to aborting a trip or trying to go on a different day. Leo can usually get through a Costco trip without incident, but he has been prickly lately, plus he has been exhibiting unpredictable irritation towards his little sister. If it occasionally takes playing Tappy Tunes in a shopping basket nest for Leo get through Costco, so be it. 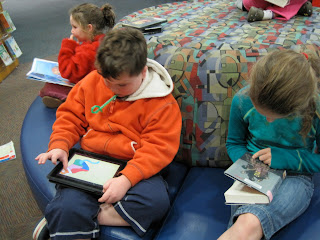 Going to the Library
Three kids quietly engaged at the library. Two of them are reading books, one of them is playing ShapeBuilder on his iPad (with the volume turned down). Library visits like this were simply not possible before the iPad, as Leo only likes the books that Leo likes, and he doesn't like them in new scenarios, e.g., the children's room of the local library. But now the girls can suggest a library trip without bracing themselves for a No!

So, yes, I still consider Leo's iPad a near-miracle. And Leo still considers his iPad the most motivating and entertaining item he owns. (I urge you to consider helping near-miracles happen for other kids like Leo, through the HollyRod Foundation's Holiday 2010 iPad Campaign.)

. Susan stressed the importance of getting out and having fun as a family, finding full-family activities that everyone enjoys. I think our family does a decent job, and we're always pushing ourselves, taking risks, and trying new things. Like local chestnut-gathering, which I've never done but which Leo enjoyed and we all found addictive (the chestnut gathering and the eventual chestnut gorging, oh my goodness they are delicious). 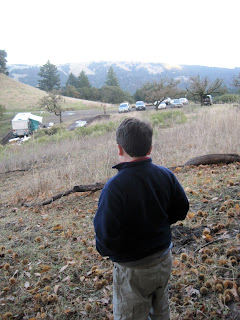 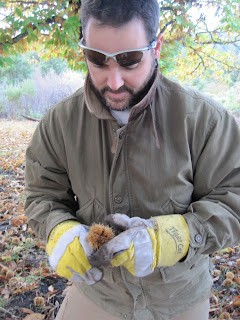 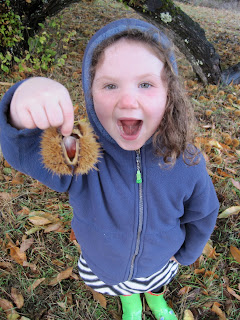 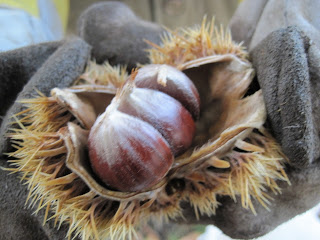 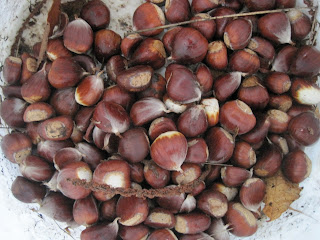 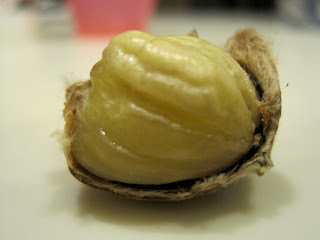 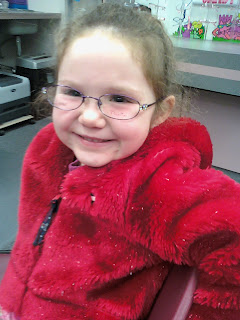 Turns out my fretting over Mali's leaning in to read signs at Muir Woods was justified. She has an astigmatism, which makes her nearsighted, plus she's also farsighted. The ophthalmologist was able to get her a prescription that will give her 20/20 vision, and the real glasses should be here in a week (these are the clear-lens model of the frames she chose).

I only have one worry, which is Mali's concern about a specific friend at school not liking her glasses. This not unkind but definitely bossypants-why-wouldn't-my-opinion-be-the-only-one-that-matters little girl also pooh-poohs my explanations about Leelo's autism, saying, "Well, he just shouldn't do that." I know it's not realistic to expect empathy and consideration from most six-year-olds; I just wish our exuberant and usually supremely self-assured girl would hitch herself to a more thoughtful friend.
at November 23, 2010