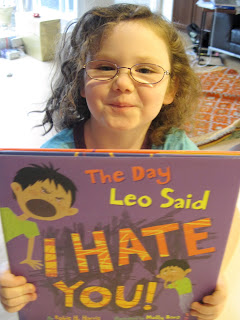 Do you have a sassy, spirited, clever, imaginative, creative, unpredictable, emotional, intense, amazing, capricious, occasionally obstreperous, mostly wonderful, never boring child in your life? Do you want to get that kid an awesome book for the holidays? Do you want books that deal with emotions and/or girls as main characters but appeal to boys too? Are you freaking because you have no idea which books to choose and the holiday clock is ticking?

Here are five recommendations for young readers, all favorite family favorites, all ones that newly-six-year-old Miss Mali and I both agree are not just keepers but worth daily go-overs:


The Day Leo Said I Hate You tells of a loving but fiery little boy named Leo (the best name in the world, though this Leo is conversational). Leo gets angry and -- having overheard his mother use the word "hate" about broccoli -- decides to test out the phrase "I hate you" on her when her thoroughly reasonable but firm parenting choices make him angry. He is instantly horrified over having said something so hurtful, but his mother skillfully uses silliness and honesty to talk him through and past his penitence. It's a sweet, lovely, useful book, with lively illustrations.

-- a gorgeously colorful, empathetic take on a small girl working through an angry outburst on her own by leaving the scene until she cools down and feels reasonable again.  When Sophie Gets Angry and The Day Leo Said I Hate You are similar to one of my own Leo's perennial favorite books, The Chocolate-Covered-Cookie Tantrum

, in that they legitimatize the full explosive glory of the children's emotions before showing rather than preaching about how the kids found their ways back to calmer places.

We also love love love love My Name is Not Isabella by Jennifer Fosberry, in which a small and also intense, capricious, and clever girl spends a day declaring herself alternately named "Annie" (Oakley), "Sally" (Ride), "Rosa" (Parks), and "Marie" (Curie), and telling of the historically accurate things she will be doing as she channels each notable woman's persona. Fosberry's light, deft take makes each scene a romp rather than a lesson, and she includes biographies at the back for the kids (and parents) who get hooked and want to know more. Note to the author: A starting point for the sequel could be the Rosalind Franklin episode from the My Favourite Scientist website -- brought to you by the wonderful Periodic Videos folks from the University of Nottingham. Note to parents of inspired children: budding scientists can get find the coolest gear at Educational Innovations or American Science & Surplus.

? (The latter seems awfully inspired by A Bad Case of Stripes, to my mind.) The tales of pint-sized mad scientist Franny K. Stein might just be the series for your family, especially if you have no intention of raising your children as delicate flowers -- these books show that it's OK for a girl to be socially awkward, occasionally antisocial, and interested in things that are gross plus in science and in geekery. We need more characters like Franny!


Babymouse is also quite awesome -- as a character and as a series. My girls are completely hooked on Babymouse's slightly neurotic but always exciting daydreaming and waking life adventures, whether our hero is a Rock Star

, or a Cupcake Tycoon

. In fact, my eldest left a precious Babymouse behind when we two flew back from Cambodia -- and that loss rather than our trip was almost all she could talk about for several days. Babymouse is the goods.


Tell Me a Dragon is possibly the most beautifully illustrated children's book we own, and features various children's imaginings (so we're told) of their dragons' appearance and personalities -- and shows the dragons in forms you may have not considered, all hail dragon diversity! If, like Mali, your child champions The Lord of the Rings' fiery Balrog demon

-- or just likes dragons (or should like dragons, damn it), this book is an excellent choice.

For those looking for even last minute-ier gifts, I'll be publishing reviews of both Mali's and Leo's favorite iPad apps next Monday and Tuesday.

Disclosure: I was sent review copies of The Day Leo Said I Hate You and My Name Is Isabella, but was not otherwise compensated in any way. This review is entirely my own opining, and features not one scrap of promotional copy. Jennifer Holm, who writes Babymouse, sent us a copy of Cupcake Tycoon (Babymouse #13) but did so well after and in fact because we were established fans.
at December 16, 2010