Are you participating in Wear & Share Star Wars Day? It's to support Katie, a first grade girl who got teased for liking Star Wars because "Star Wars Is for Boys" AS IF! Info from the FB campaign page on FB:


Katie is a first grade girl who has been teased for bringing her Star Wars water bottle into school because the boys in her class say Star Wars is only for boys. Since her mother posted the story on the web, people of all ages have read and commented to show support for the girl to like whatever she darn well pleases. 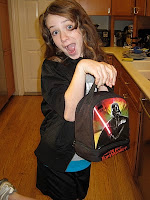 The hell! I lined up with all the other kids when I was seven to see the first Star Wars movie. All the other equally excited-out-of-their-minds kids -- not just the boys. And I have always been a fan, though like many I gritted my teeth through the second wave of movies.

And my kids? They're fans too (although poor Mali, being a third child, hasn't had much exposure). But the two big kids have always been geared up. Here's Iz with the Darth Vader lunch box that was her pride and joy in 1st grade -- and which, like Katie, she stopped using in 2nd grade due to teasing. I talked to her this morning and she's still skittish about sporting Star Wars wear & lunch boxes because the other girls would tease her (stupid middle school social dynamics), though she says she wouldn't mind an Ewok shirt (which got Seymour musing about the wonders of the Ewok Christmas Special, and whether copies might exist anywhere ... anyone?). 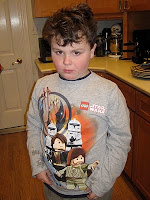 Leo's got quite a bit of Star Wars wear as well -- clothes and jammies. He doesn't pick them, but I think he likes them. And I remember an interview with author Nick Hornby, who has a teen son with autism, talking about how he tried to be mindful about getting age-appropriate cool clothes, posters, etc. for his son, thing he thought his son might like.  So it might be time to put some of Leo's Teletubbies toys away, and see if he notices -- though I'm torn, as I feel as though our boy should get to play with whatever makes him happy in the sanctuary of his own room. Happy is primary!
May the Force be with our kids!
at December 10, 2010