Again, Leo had a wonderful time. I knew from experience that he would likely sit still through the entire trip, but I also knew that since we were going through the touristy parts of San Francisco, we could exit the vehicle and take a cab or cable car back to Fisherman's Wharf and our vehicle, at any time. I was slightly nervous about the vehicle's open sides, because Leo has jumped out of small boats in the past, but it would have taken a significant effort on his part to escape. I think if your autistic child is the kind of kid who enjoys "transportation days" and has never tried to escape from a moving vehicle, the Ducks tour would be a fun choice.
at June 30, 2012 2 comments: Links to this post


This review is by self-advocate Kerry Magro, whom I finally met in person at IMFAR last month. Thanks Kerry!

Kerry was diagnosed with Autism at 4 years old. Now as an adult Kerry has become a disability advocate who has been featured in television, radio, and film. Today Kerry works as a Motivational Speaker, Co-Host of Hope Saves The Day: Autism Radio, and Vlogger for his blog “My Autism My Voice.”

A community is defined as a group of people living together in one place where they are often intertwined with a common goal or purpose. Now, if you were trying to define an autism community, this book could certainly be one of your best examples of that. Thinking Person’s Guide to Autism, which was edited by Shannon Des Roches Rosa, Jennifer Byde Myers, Liz Ditz, Emily Willingham and Carol Greenburg gives us a look inside autism in today’s society from some of the people who know autism the best. It started off as a blog where they asked people within the autism community to send essays focused around autism related topics. It ended up book published by Deadwood City Publishing.

This is no ordinary book. After reading it I was astounded by the amount of information. There is a wide range of topics in essay’s that stay on point with a clear mission and purpose. It is something that any reader who cares about autism can get behind.

I had always been an avid reader of the Thinking Person’s Guide to Autsim blog and even wrote a blog post for them about Coming Out About Autism in College in August 2011, so I knew first hand that a collection of these blogs posts could be great.

The main areas of the book that stood out to me were done by the editors along with the essays by Laura Shumaker (SF Gate, A Regular Guy with Autism) and Jess (A Diary of a Mom). The book does a great job of balancing between informing the reader and also giving hope and inspiration to them as well. It’s a book that’s very well rounded overall.

Along with the essays comes a great deal of resources at the end of the book, which I found impressive. Between recommendations for books, movies, online resources, and blogs, there is a sense of further learning for readers of the book.

The next step I see for the autism community now is to continue to encourage young individuals on the autism spectrum to pursue literary work. There were several essays from autistic adults in the book and I’m optimistically hoping that we hear from one or more of these voices on a best-seller list in the near by future.

In the end I commend everyone at Thinking Person’s Guide to Autism for all their great work in this project and hope they come out with a sequel very soon to include more of the blog’s wonderful essays.

If you want to learn more about The Thinking Person’s Guide to Autism please check out the blog here.
at June 23, 2012 No comments: Links to this post

"Want to go to Disneyland?"

Leo keeps asking to go to "Disneyland," so we spend the morning looking at pics from our trip -- to Leo's utter delight. We need to figure out a way to get this boy back to Mouse Land -- he's been asking for "Disneyland?" with increasing urgency. 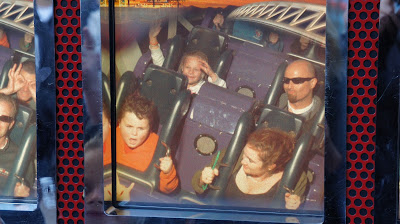 My brother (the cheeky dude in the glasses) took the above shot-of-the-shot of us on the California Screamin' roller coaster. At the time Leo wasn't so pleased, but when he saw this pic this morning he pointed at it with extended index finger and said, "Again?" (Yay fine motor skills!)

Also Leo woke me up this morning via the repeated top-volume "ka-thunk ka-thunk ka-thunk ka-thunk" of a cheap plastic soccer ball being kicked and successfully, repeatedly returned to a wall at short range (though I'll admit to wishing he had chosen a location other than my echo-chamber bathroom). Our boy has some serious gross motor coordination and reflexes, we need to provide him with more outlets -- but in the meantime, any one who wants to hang out with Leo should now feel free (or even obligated) to kick a ball around for five, ten minutes. (Yay!)

In the meantime we have been watching this Star Tours video a lot -- that was Leo's favorite ride. Anyone have any other favorite YouTube Disney videos?

---- We have been so many clicks beyond busy that I don't even know what to write about that. But Leo is certainly in a good space, and that makes everyone happy here.
at June 16, 2012 3 comments: Links to this post