Mali's week of 8th birthday festivities came to a close today, with two parties: one in her class, the other her "real" birthday party at a jumpy house palace. For the latter, she chose a Costco cake (score! from a labor perspective); for the former, she requested Nutella cupcakes. Um. OK. Commence Internet research.

The mini-cupcakes I ended up making (and which had folks on their knees) drew on three components:
You want to make them too? Well then:

Get some yellow cake mix. (Oh, come on. Yellow cake mix rocks.) Mix it up. Make mini-cupcakes with it. I recommend a barely-oiled silicone mold or cupcakelet papers.

When your bitty cupcakes are cooked and cooled, cut a divot from each top: 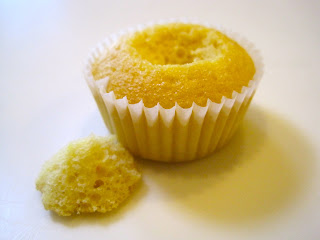 Fill each divot with Nutella
(Quarter is for size context,
divot cribbed from Baked-In.com) 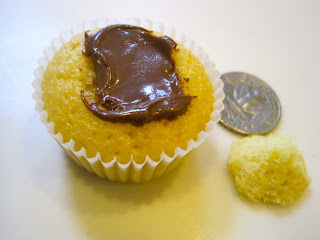 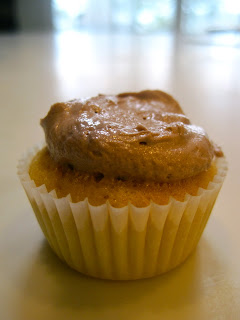 Hold cupcakes in front of you while proferring, or put on a table and stand back. You don't want to get trampled. These bites are amazing.

Irony: Mali didn't like them. But she likes nothing except quesadillas, fresh blueberries, and Nutella from the source, so.

Please share and enjoy and consider yourself warned.
at November 30, 2012 3 comments:

This girl is eight years old today. This fiery sparkly spunky visitor from the planet Extroversia, who keeps both herself and those of us in the audience so very entertained.

Though she'd want you to know that she's not actually eight until 11:54 tonight. But it's her birthday regardless. And that means dinner at the Lobster Shack (because they make the best grilled cheese sandwiches, obvs), and a bouncy house party later this week, and that's all very exciting.

What amazes me, though, is how very little she requires to fuel her marvelous version of reality. When asked what she wanted for her birthday, she thought for a while and said, "Another episode of the Power Puff Girls?" because they're not on Netflix. And when a girl has access to the local public library and Netflix and one's house is full of cardboard boxes and tape and Sharpies and colored pencils and pens -- really, what else is needed, or desired?

Here are some of her created objects from just the past two days at home:

I do realize she might not always be this embodiment of carefree awesomeness and explosive creativity -- puberty does strange things to a person -- which is one more reason to celebrate who she is right now. And to keep my fingers crossed. And to relish her very self this very moment, as in this video about her "magic waterfall":


Sometimes I think she deserves a mother more like her -- someone whose imagination is equally wild and on fire -- but then, perhaps I'd contaminate her. Mostly I try not to overthink it, just relax and enjoy and appreciate and be grateful for having her in our lives.
at November 26, 2012 2 comments: 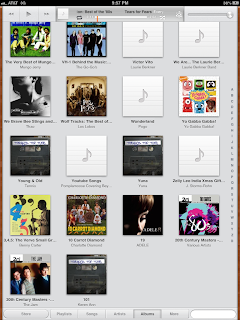 Leo went off Risperdal last month. We were going to transition him from Risperdal to Seroquel because the Risperdal was affecting his cholesterol levels, but during the meds-free part of his transition he did so well that we just ... kept him off. And are continuing to do so, with his doctor's full support. Most of the details are in the BlogHer column I wrote last week. In general, he's doing well. Some hiccups with having a hard time getting to sleep (Risperdal is soporific stuff) but they're minor and entirely reasonable for anyone who essentially just went off sleeping pills, and his sleep is not otherwise disrupted. Which is healthy for a growing kid.

I'm observing him extra-closely just now because we're a data-focused family. It's important to know how his post-Risperdal behaviors compare to those from past years, especially as the Halloween-birthday-Thanksgiving-Christmas season is challenging for him regardless, what with schedule disruptions, sweets, visitors, travel. If he's having a really hard time -- an uncharacteristically hard time, rather than reacting to seasonal circumstances -- we want to know.

So I'm noticing. I'm noticing remarkable things, like how he uses his iPad to manipulate music. He has always enjoyed using his tablets' icons (so friendly to visual types) to hit favorite beats and moments in music and videos. But if I wasn't noticing, or if like his more sensitive sister I found it difficult to tolerate the ensuing seeming cacophony, I might get irritated. And I might have missed the resulting patterns he's creating -- essentially his own, custom music compositions.

He strings together and then loops the introductions to songs like Everybody Wants to Rule the World and Right As Rain, alternating precisely, stopping before the vocals in each. Because those vocals don't match. But you know what does match? The two songs' propelling beats. They're mirrors, they make a pair. If he knew how to splice them into a mashup, I'm betting he'd do it. I'm guessing he might, eventually.

This boy, who was given a diagnosis of Extreme Cuteness about the time this photo was taken... 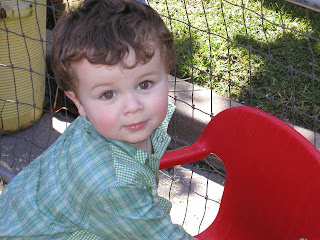 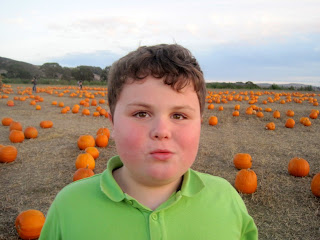 We are going to spend his birthday -- and much of the weekend -- doing exactly what he wants to do. Eating cupcakes in his class. Going to his favorite Indian restaurant for dinner. Going to see "a movie!" if we can squeak it in -- possibly Wreck it Ralph, as certain folks appreciate its neurodiversity message. Staging a Quirky Kids takeover of a local jumpy house palace to celebrate the Leelo-ness of Leo. With pizza. And his requested "chocolate cake!"

And I will continue to marvel at how the sweet, cute boy above -- a boy who will not put up with a "boy" label much longer -- continues to defy the klaxons of doom that so many experts set off around him when the first photo was taken, who continues to grow and mature and gain skills and ... need us less. (*sniff*)

At 5:30 this morning, I heard his bathroom door slam and walked over to see light streaming out from under it. Leo was standing nearby in his bedroom, looking groggy. I stomped over to knock on the bathroom door and grouch at Iz for waking her brother up -- except lo, there was no one in the bathroom, because the light-turner-onner and door-slammer was Leo, who had needed to pee and just wanted to go back to bed, Mom. Leo, who didn't see why door slamming and leaving lights on were such a big deal. Who thinks I should know by now what 12 year old boys do as they wander around their natural environments. Who was giving me an sincere, bleary-eyed WTF look. Who did indeed go back to bed until it was time for his birthday blueberry pancakes.

Rights and Compassion: Why I'm Voting for Obama

Leo was born just a few days after Election Day of 2000. I had fully expected the election itself would be over and done with by the time our boy arrived (it wasn't), and had never thought that a slippery buffoon like George W. Bush could become president (e.g., he lost the popular vote). That election, and Dubya's country club-style presidency, popped the earnest bubble of beliefs in which I was living, made me realize I was taking the pervasiveness of democratic and liberal ideals for granted.

Still eager and dewy-eyed, I became convinced that all I had to do to convince someone they had placed their faith in the wrong candidate or cause was show them the facts, show them evidence. Because who wouldn't put their faith in what I considered demonstrable truth?

Twelve years later, I no longer believe in evidence as a trump card. Facts don't convince true believers, they make them retrench. Examples:
What can we do? I've been writing a lot about acceptance lately, and I guess another form of acceptance is understanding that some people cannot process what they don't want to hear. Acknowledging that true believers want things simplified and palatable -- they do not want to wrap their heads around complexity, even if they think they do, like billionaire Leon Cooperman -- who took two painstaking weeks to write a screed about Obama's "divisive language" that then turned viral, yet who considers our President's background as a community activist, law professor, successful author, & senator as "never having worked a day in his life." Yet I also know repeated exposure can bore through rock, and so ideally through rock-hard beliefs. I have to believe that people want to think, they just aren't always encouraged to do so.

For a while, I thought avoiding direct engagement or not citing names while persistently speaking out was the best way to get messages out. That if one must confront reductionist true believers, then a calm and professional attitude would enhance the very rightness of the right messages. Staying on message, unflappably, would eventually get through to ... if not the zealots, possibly those in the zealots' thrall. But, as we saw in the first Obama-Romney debate, behaving like an adult when the opposition goes on a By Any Means Necessary rampage makes one look flat, uninvested, and lacking in conviction.

So what is the right approach? I'm circling back towards speaking the truth and calling out falsehoods while avoiding outright smackdowns, the model Obama deployed in the second and third debates. I'm still working on it, because I'm an easily-riled hot head (e.g., anti-vaccination paragraph above). I can't stand by and watch people like Mitt "Tax Returns" Romney lie and evade and spin, and not call them on it. But I can avoid sinking to their level, can avoid treating people as unthinking, gullible sheep.

Twelve years later, we're all lining up to the polls again. Or trying to. And hoping that our votes will actually be counted. And I'm no longer that innocent expectant mother of 2000, who believed democracy and integrity would prevail because duh. I'm terrified that four years of Republican obstructionism will come to fruition at the polls tomorrow.

My vote is my way of speaking out in defense of what is ethical and what is just, a near-sacred duty as it means speaking for my children, who cannot yet participate. I do not know what their future holds, but if they are disabled, LGBT, unemployed, impoverished, or unexpectedly pregnant -- disadvantaged in any way -- I want them to live in a country that treats them with respect, dignity, and understanding. As fellow citizens. As the citizens their immigrant grandparents were able to become, via a process that brought every non-Native American to this country, FFS. And I want that respect and dignity and understanding -- what's right, not what's soothing to believe or easy to hear -- to prevail in our country, now.