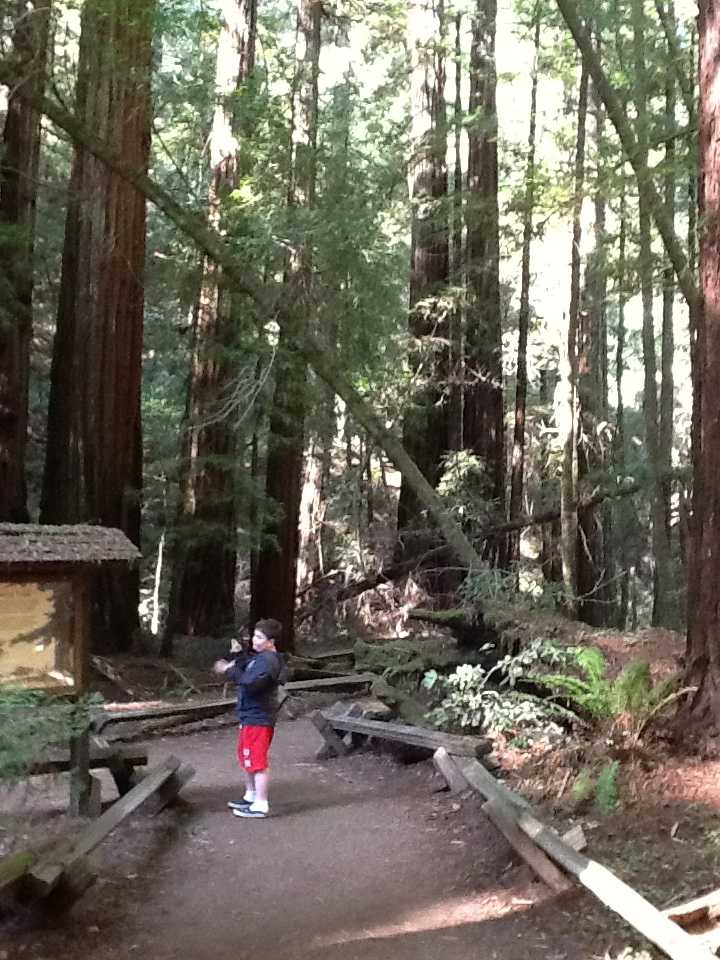 It's been a while since I did a laundry-listing post. But the last ten days have been so overwhelming, in terms of emotional intensity (I cried a lot, OK?) and events, that I'm just going to have to do that in order for this site to be a functional journal. Which it's supposed to be. And isn't, not lately. I'm also not meaning to be a whiny git, because I've had my full share of whiny parent gits lately and I'd rather not be in their company. But I do want to get all this down, even in raw form. So I can look back and learn, and try to do better.

Last weekend was the big fundraiser for Leo's school. It was a huge deal, Seymour's parents came down and stayed with us, Sullivan and Emily and partners came (and met for the first time IRL, which was nifty). However I am a dolt and had the times wrong, so we were an hour late and missed the auction and most of the non-stuck-at-a-table socializing. Which I wasn't interested in [read: am terrified of] doing on a large scale but had hoped to do with the rare combination of people present. So, bummer that. But the school met its goal, Jen was a gracious host and did lots of impressive impromptu Presenting, and we also got a fabulous new director, best possible choice to replace the wonderful current director. My hope is that the wonderfulness continues and that the school continues to be the place Leo needs it to be once he's of age for the Adult program.

My laptop shattered the following day. I'm sure it was a kid, knocking it off a surface. I have no evidence or leads, however, so I didn't even bother asking, as we have AppleCare and the ability to get it fixed. Our house runs at a constant emotional fever pitch, I didn't see the point in whipping things up even further. But I spent the entirety of last week gritting my teeth, using the mothballed laptop we've planned to turn into Mali's dedicated Minecraft server because she won't notice it's no good for anything else, and which is so slow that I had to cut-and-paste all browser-based writing or correspondence from TextEdit because of the ten-second lag between typing and letters appearing. I don't know about you, but I'm a browser jockey, with several windows and apps going at once. So that was counter-productive and frustrating but temporary and I'm typing on my Precious again as of last night (clasps laptop to chest).

Leo had a rough ten days, is still having a rough time. I don't know why. He's getting bigger, maturing, possibly coming up on puberty, probably getting frustrated with the gap between his needs and comprehension, and his ability to express those things combined with our not-always-perfect ability to interpret and act on them. His frustration has been manifesting in ways I'm glad tend to be directed at me as his primary communications stop gap, and not at his sisters, not unless they are assaulting his hearing or triggering his sensitive emotions. But it's manifesting in ways we need to be very careful to help him redirect and learn to control for his own social and participation-in-society well being. And in ways I honestly hate for Seymour's parents to see, because those behaviors make it difficult for them to focus on Leo himself and how well he's doing in so many other ways, like his communication. (Though they were constantly reaching out to him during their stay, which was sweet. Not everyone tries with Leo.)

The irony there being that Leo's doing much better in his new home program. I've not written about this much yet, I think. He started a new home program in February thanks to the new California autism insurance mandate. The problem was, February is just when everything was at its hardest for him. Winter is usually a behavioral rough time, plus he's not been himself since seizure in December. So having a team of new people placing demands on him during the afternoon witching hours has been ... a challenge. (And, honestly, a source of near-heart-stopping stress, as are any circumstances in which Leo is displeased and dysregulated.) Even though he's working with lovely people. And now Leo and those lovely people are starting to get each other's rhythms, starting to have synchrony, starting to get stuff done. So, whew that.

But we still don't really have an explanation for Leo's seizure and anaphylactic shock. I got the last of the reports -- from his allergist -- while I was sitting in the Apple Store parking lot on Tuesday morning, fretting over Leo's dysregulated behaviors and reviewing IEP documents through the shattered laptop screen (his IEP was the next day). It took a long time to get those final reports back as Leo turned out to not be a huge fan of the allergy skin prick tests, so he needed to get blood work done instead. And while Leo has learned to tolerate shots and blood draws fairly well, it took three separate attempts at tourniquets and sticks this last time (Friday AM ten days ago). He was not pleased, neither was I, but it wasn't anyone's fault -- his veins have become elusive. Anyhow, more stress. All round. Poor dude. He was so patient.

The allergist's final call was to let us know that Leo has ... no allergies. To any of the environmental agents or foods for which he was tested. (He does still react to Amoxicillin.) The neurologist had no answers either. No answers. Ironically, the medication Leo takes lowers his seizure threshold, but he was off that medication from October to February, and his seizure and anaphylactic shock episode and hospitalization and almost-dying happened on December 27th. So we just need to keep the Epi-Pens around, and make sure we're up on on seizure safety. And keep living our lives, was the recommendation from both fronts. I'm trying to, but have not been able to sleep through the night since December (ironically, Leo's sleep has gotten much more consistent).

The IEP went well, from a logistical perspective. I had several pre-IEP meetings with various team members -- one of which Leo participated in as well -- so the official IEP meeting itself was well-oiled and hiccup-free, and all services are remaining not just intact but consistent. And his SLP is very serious about probing the UNITY AAC system with him, for scaffolding his speech because Leo has so much to say but expressing it is not easy for him. But it was difficult, really difficult to hear and have it go on his official record that Leo had been on track for independence and goal-meeting all year until his seizure, at which point he regressed and everything had to be recalibrated for sensory accommodation and regulation. I know he'll get back on track. But it just doesn't seem fair to him, when learning and being in school was already taking everything he had.

It was also instructive to learn from his IEP team that that the kind of language we use at home when Leo's behaviors are not just disruptive but potentially dangerous -- a big, loud, firm "NO," to let him know we're serious and emphasize that the dangerous behavior is in a different category than other behaviors -- cannot be used in a classroom full of echolalic students. Nope, not a great idea. They have other strategies, though, all of which are in keeping with our philosophy of respect and understanding behaviors. Feeling lucky about that.

Leo's sisters are having a lot of needs right now, as well. Seymour and I are giving some serious thought to how best to meet those needs, make sure the girls know we're here for them every bit as much as we are for Leo. I may be rethinking my other obligations. I'm needed here. High school is hard. Being a teenager is hard. Third grade is also hard. Being a third child, that is also hard. 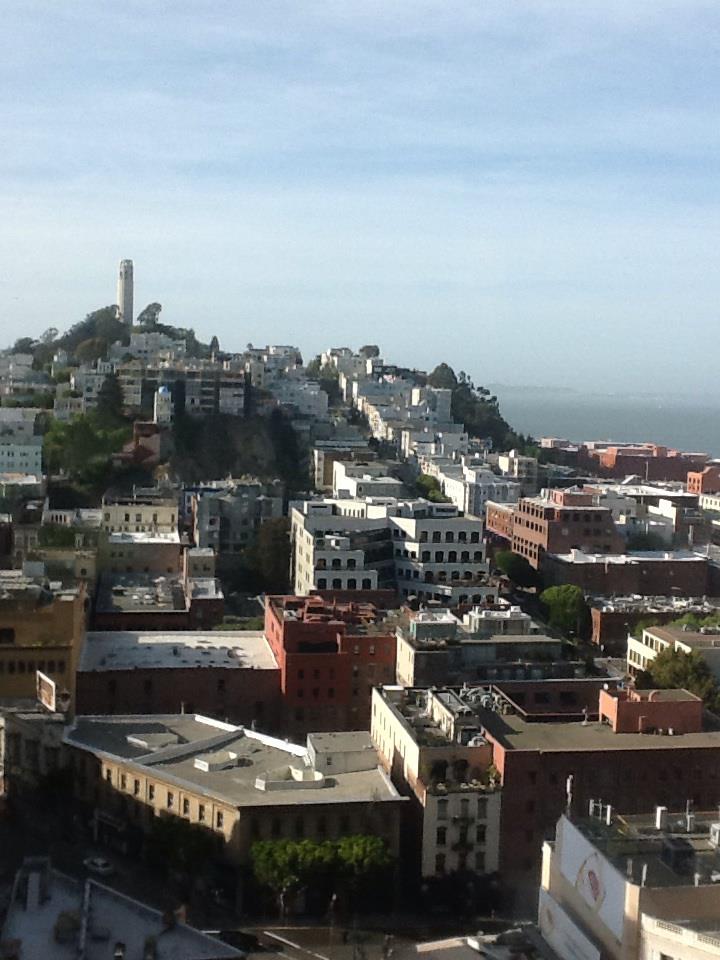 Being parents, that is also hard. Which is why I'm glad Seymour and I took off this past weekend for an overnight in San Francisco. (Leo was at camp, the girls stayed with marvelous friends whose kids we will happily mind, on some future date.) We probably talked about the kids instead of each other too much, but hello, we're parents.

The weekend was glorious and so cherished otherwise (photo is the view from our hotel room, which was a gift from my brother). And though I didn't sleep well even without the kids around because my subconscious wouldn't stop worrying about Leo being at camp for the first time after his seizure, few experiences can compare with a weekend in best-city-ever San Francisco with my soul mate. Dim sum breakfast and walks along the playfully lit-up Bay Bridge are very soothing. And soothing is good, for all of us.