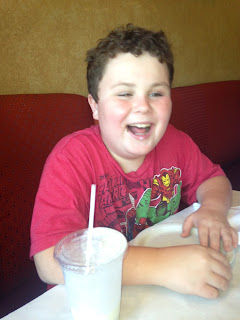 This is my Leo. He's 12 years old. He's autistic. Could you look him in the eye and tell him you understand why parents kill autistic kids like him, or indeed any disabled kid who needs full-time support?

Is it because you've learned enough about autism to know that autistic people often find eye contact uncomfortable? (Then why didn't you take the time to find out that Leo isn't much for stereotypes and actually craves eye contact?)

Is it because you're a coward and can only say such things on the Internet? Because you mistakenly assume autistic kids and adults don't read what you write -- or if they do, then that proves they're not like your child and so don't get to join your conversations about their lives being devalued?

Or is it because you are a decent person and could never imagine doing such a thing, and understand that telling another person (or group of people) why their life isn't valuable is totally, beyond the pale, nastily, horribly, prejudicially, morally wrong?

I am so tired of people excusing the latest batch of parents who murdered or tried to murder their autistic children. First CBS News released a video justifying the murder of autistic teen Alex Spourdalakis by his mother and godmother. Then Issy Stapleton's mom tried to kill her, though thankfully did not succeed. And now Jaelen Edge and his sister Faith were both killed by their mother. In each case, almost all media outlets pounced on autism as a justification -- even People Magazine asserted that autism drives parents to despair, in the case of Issy.

What kind of society, media, or community sympathizes with murderers instead of murder victims? Especially when the victims are children? Ask yourself this. Keep asking until you can't imagine autism ever being used an excuse for murder.

We've been fielding murder apologists at TPGA Facebook during these horrible few weeks. And I am just about done with such harmful and misplaced empathy. So I'm going to tell you what I've been telling the people who don't get it, what I wrote at BlogHer last week:


Just because you understand how difficult parenting can be does not mean you understand why someone would kill their autistic child. Those two subjects need to be separated by a brick wall.

Most autism parents would never even think of harming their kids. Even when times are tough, they know their kids need their love and support, and are their responsibility. But some parents -- due to their own wiring -- may be at increased risk for despicable acts towards their children. When and if that risk is present, you need to ask yourself one final question: Do you want those parents to be constantly exposed to the message that society will forgive them for murdering their autistic children? Or do you want them to absorb that murder is wrong, murder is unacceptable, and that they have other options if they feel they can't continue?

I want Leo to grow up. I want Leo to feel valued. I don't want him to ever hear harmful messages about autistic kids' murders being justified.

I'd be grateful if you'd spread the message that it's not "understandable" to kill my son.
at September 16, 2013