A Birth Mother's Adventures in Dreamland

I have been having extremely vivid stress-bomb dreams for the past week, the kind that wake me up with a start several times each night. Perhaps my brain has a fail safe so my heart won't explode while I'm asleep, so I can verify that no, my long-haul trucking partner Cee lo Green was not actually crushed in front of my eyes by a falling cargo container. A certain scientist friend says the dreams' intensity may be caused by the antibiotic I'm taking due to not listening to my body very well. In that case, three more days and I'm out.

Though I'll also be wistful, because occasionally the dreams are wonderful verging on wish fulfillment. As in long, thoughtful conversations with my birth son about his life and hopes and interests, after he and a bunch of his friends happened to move into the commune across the street and I brought them welcoming cookies and discovered he was there and in dreamland fashion he knew who I was just not where I was or how to contact me so it was all cool. So very, very cool.

As I do not live in dreamland, the "all cool" scenario is unlikely to happen, and reality will be more complex. But I have definitely had that young man on my mind more than ever lately as he just moved to our area for grad school. Please know I have been disciplined about not stalking him IRL, because that is creepy, and when I did have to go to his new school a few weeks ago for a lecture (we go there often, it has many public events), I did not allow myself to look up the location of his department beforehand.

Except my intellectual precautions had nothing on my visceral impulses and emotions, and the caprices of fate. From the moment I stepped on campus, my attention was drawn to every last potentially ginger student. I couldn't stop scanning, I couldn't focus, couldn't stop my heart's racing. And when I entered the lecture hall building and started walking past office doors, I realized I was ... in his department. I took deep breaths and continued to the lecture, only to find a stifling hot, crowded space with no seats -- a waking nightmare scenario, for me. I tried not to hyperventilate, but after about fifteen minutes fled to the bathroom and broke down in sobs. Not my best day. Fortunately that  scientist friend of mine showed up and dragged my sorry butt off for a stiff drink, duck fat french fries, and uni. Which helped.

But back to dreamland: My ideal resolution would be similar to the FB-spurred, heart-warming birth mother-daughter reunion recently documented in the NY Times*, in which the daughter described her birth mother as adding to her life, rather than filling some sort of need -- because she already had parents. What I do not care to do is try to lure him in or win him over, make him doubt everything he ever believed in, as in the extremely fine SF short story by Yoon Ha Lee, The Unstrung Zither.

But I do think that his mother intended for me to be a part of his life, even if just as small part, because of this letter I recently found from her, sent when he was two months old, and containing the pictures of him that I looked at every night when I fled to Ghana the first time. I am going to keep telling myself that that was what she wanted. And even if he doesn't want me to be a part of his life, I just really, truly hope he knows who he is. 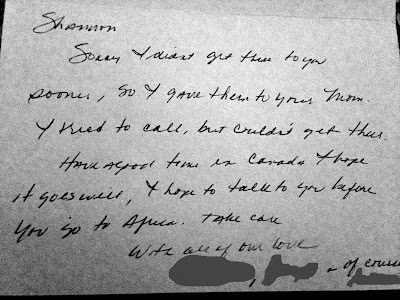 Awake or asleep, I am definitely craving resolution. I have taken a small step in that direction, one that does not involve contacting my birth son directly, and will wait a few beats before making another attempt. Fingers crossed.