How to Be a Wicked Mother

Here's the thing about my family, the D'Artagnans: We're people pleasers. We're doggedly loyal (though gods help you if you wrong not us, but someone we love), and we'll dig to the othe side of the planet and back to make things happen for family and friends. But it can be a rather impish process. Witness:

Iz turned eleven this past weekend. All she wanted was to see Wicked -- and had been perseverating to that effect, for months. Finally, in early December, I'd had enough, and told her, "Iz, I need you to stop badgering me about Wicked, otherwise you'll never get to go." (Note that this is not a no.) So she stopped nagging. And I started plotting.

I found discount tickets online, on her birthday. I asked Seymour and Iz's Godfather Michael if they would go with her. They agreed. (I opted out as I needed to do prep for Iz's post-Wicked slumber party.) And then we came up with a plan. We told Iz that godfather Michael was taking her to Alcatraz for her birthday! What a treat! But -- she was genuinely excited, plus we realized that dressing for The Rock and dressing for The Theatre were divergent tasks.

So Michael and I confered, and revised: Oh no, Michael forgot it was a holiday weekend! Alcatraz was sold out! But he'd found an alternate event, and hoped she was as excited as he was! The following letter is all Michael's doing, I merely suggested that he think of a formal event that would underwhelm a tween:

Hello, dearest goddaughter of mine.

Your mom and dad have been kind enough to let me take you out for your birthday. How's that? I would call to ask you personally, but I won't make it home to call you until way past your bed time. When is your bed time, anyway? You're almost eleven now, it may be time to re-negotiate that with your parents. Or not. I have no power over such things, you know.

As if by some stroke of magic, the San Francisco Symphony is performing  a rare "Salute to Canada" on Saturday afternoon, hosted by that most famous of all Canadian songbirds, Anne Murray! I think (and I am sure your mother would agree) that it's high time you started to get more in touch with your glorious Canadian heritage. Two and a half hours of Bryan Adams, Paul Anka, Leonard Cohen, Stompin' John Connors, and Céline Dion songs all performed by one of the greatest symphonies in the world is just too good a thing to pass up.

The performance is at 2 pm. I thought you might like to lunch at a little place called Frjtz before hand. Please dress appropriately for the theatre.

It wil be fun and so educational!


Iz tried to muster enthusiasm, but confessed to me that she felt guily about not really wanting to go, and that she'd really been looking forward to Alcatraz -- but she didn't want to disappoint her godfather since he was so excited. Poor girl!

The day arrived. And it was a big day, with multiple events: breakfast at our favorite café, her soccer game, lunch at Frjtz, a slumber party, and...

After lunch, we drove to The Orpheum. She saw its huge Wicked sign, and while that was exciting,  didn't think anything of it as were were in the Civic Center neighborhood of majestic performance spaces. But then we stopped and told her she should get out.

Because she was seeing Wicked. 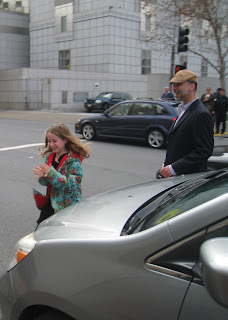 She basically went supernova with happiness. Which is what every parent wants for their child, yes?

Godfather gave her a hug and apologized for being friends with a mother who delights in playing tricks on her children. Seymour said she remained rapt for the entire performance. I drove off with the two littler children, quite pleased, myself. The D'Artagnan traditions are alive and well in our family. 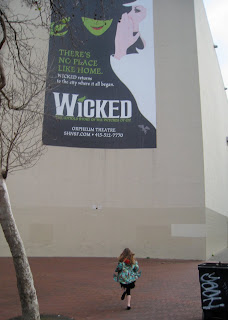