And this is how we did it: With a visual schedule. Leo's need to anticipate his day was even more important than usual in the unfamiliar though very cool environment of his grandparents' home. Scribbly torn post-it icons were fine -- once we told him what each one was, they were accepted into his personal canon. 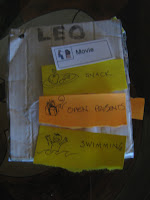 Another centering item was this toy, the name of which I cannot remember but which kept Leelo and his sisters occupied for hours, and which I found at Target during a morning Las Vegas toy & materials & last minute gifts run with my friend Kate. Supervisor M had brought Leo a metal-pin version years ago, which he also loved, but he kept tweaking the pins -- and then it wouldn't work properly, and then we had drama. With this plastic version, you can pluck out any bent pins and carry on. 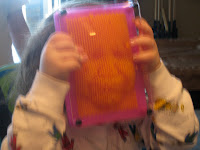 We did a decent job prepping and accommodating Leelo, I think. He was in such a good space that he not only enjoyed Christmas morning but posed for pictures with his sisters: 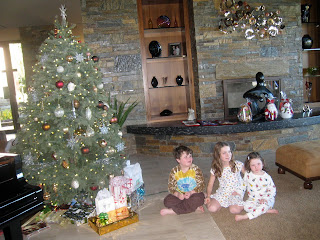 His grandparents, ever thoughtful, got him a very cool set of therapeutic stepping stones. Leelo loved them, and, having a puzzling sort of mind, immediately fit them together into balls: 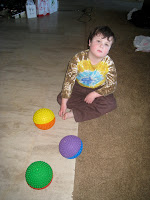 Mali's Auntie Bree got her this fashion puppy. It comes with high heeled shoes and a tiara! Mali is enamored of her very L.A. gift from her very L.A., very smart auntie. 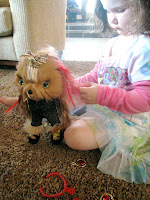 The kids spent a lot of time in the pool even though the air temperature was less than 15 degrees above freezing. We also made sure to get out and hike in Las Vegas's beautiful Red Rock Canyon. Mali was not thrilled, but then her legs are a lot shorter than everyone else's. (Can you see the Luxor in the skyline behind her?) 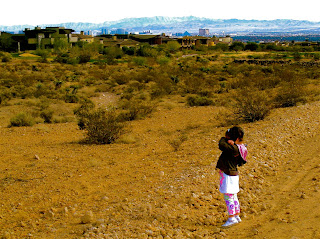 Iz and Leo are almost always enthusiastic hikers. And oversaturated ones! (Oversaturated photos are de rigeur for parenting blogging, yes?) 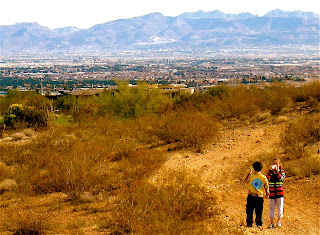 Leo also tolerated and even enjoyed dinner at a nice sushi restaurant and then at an even nicer -- nice meaning *white tablecloth* restaurant on Christmas Eve.

This made us cocky.

And he did fine! How? Well, let's just say we're thankful for the ubiquity of a certain coffee purveyor and their complimentary long thin green objects. 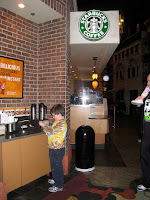 We toured the new City Center (really cool, and I say that as someone who avoids both malls and casinos), then walked to New York New York so Iz could ride the rollercoaster. Our fun was multiplied by meeting up with our friend Skip (who is not a huge fan of rollercoasters but rode anyhow because Iz asked him to) and his sister Liza (who took this picture, in which I look LIKE HELL but that's neither her nor the camera's fault).

Fun in Las Vegas. Who'd've thunk? Not me, not a year ago when we thought family travel might never happen again.

Our only bonk was a big one: We didn't arrange for respite. Leo's need for 1:1 supervision is stepped up in environments that are not our home, which meant that Las Vegas was all me & Seymour, all the time. And Leo doesn't just require watching; he needs to be engaged. I think we managed to balance socializing with Seymour's very accommodating parents, getting our Xmas organized and deployed, and ensuring that the girls had a good time, but we were both exhausted by the time our visit was over (and I also had to work, which Seymour covered as best he could but which still meant a few late nights on top of long days).

We'll get respite next time. Right now we'll just savor Leo's success, and knowing that our family can travel again!