We missed church today, which is okay because Unitarians, they understand when life gets in the way. And ours does, too frequently. But when we miss, it is always because our lives are almost embarrassingly, and certainly exhaustingly, rich and full - like drinking from a chocolate milkshake-filled firehose for eighteen hour stretches.

I particularly regret missing the Joys and Sorrows part of the service, during which community members stand up and declare the highlights and low points of their lives during the last week. I rarely stand up, because I tend to balk even if my news is cheery - so here's the blogging version: 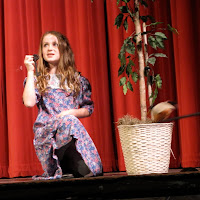 Iz was Mary Lennox in her school's production of The Secret Garden. She was amazing, especially for a girl who had never acted before (she was a dancing fairy in The Tempest two years ago, but had no lines or non-dancing scenes). Then again, they needed someone articulate and good at memorizing who could also pout and yell on cue - well spotted, casting director! I think the directors also liked her 500 pounds of long thick curly hair.

In the photo, she has just found the secret garden's key. The painting of her as Mary Lennox is by Lea Hernandez, the artist behind our two Can I Sit With You? book covers. (Lea is currently seeking commissions to help pay for her daughter's education.)

We were so grateful to all the family and friends who came to see Iz perform, and came to the reception at our house beforehand - including all grandparents and godparents. Even Mali sat through the entire play, and enjoyed it, which was a welcome surprise.

I didn't want to torture Leelo, though, so he stayed home and continued to groove on his (no longer our family's) iPad. He will play/do educational activities on it for 20 minute stretches, which is a looong time for him. He continues to impress me with his navigation and problem-solving skills, typing and even willingness to try new games. I am an iPad convert. I wish Steve Jobs would launch a campaign to donate iPads to kids with special needs or learning disabilities. And I'll be writing a BlogHer article on the iDevices revolution and what it means for Leelo & friends (not just autism friends) in two weeks.

Speaking of people who own iPads, I published a second interview with Holly Robinson Peete last week, this time for BlogHer, before the Celebrity Apprentice finale. My sister-in-law Bree said that Holly was very focused (euphemism) on the show, but I have to be frank - every single time I talked or corresponded with Holly, she was intensely friendly and positive. I am glad that Snapple awarded her a matching jackpot to donate to the HollyRod foundation even if Bret Michaels was declared Celebrity Apprentice.

My mom and I have been taking time for short San Francisco jaunts. On our latest excursion, I had the honor of showing her the Coit Tower murals for her first time. And then we sat near Danielle Steele at lunch! My mother asked me how I knew who she was, and I told her that I recognized her from the backs of her books, the ones my mom left lying around when I was Iz's age. My mom proceeded to deny owning any of those books, saying they must have been *her* mom's. Who lived in Canada at the time. Uh-huh.

Watching Glee was hard this week. Rachel's birth mom engaged in subterfuge by proxy, including sending Rachel a tape and talking emotionally about not being allowed to contact her daughter at which point I walked out of the room. Because, yeah, I sent him a mix tape. Anonymously. He did put out a plea on Facebook for friends & family to send him cosas americanos, and he did publish his address, and he most likely thinks it was a friend messing with his head, right?

Horrific sorrow: A woman from our church died of a heart attack three days ago. Very suddenly. Pretty much out of the blue. She was a good, smart, hard-working, compassionate person, and the mother of two small children, one of whom is a good church friend of Mali's. So please hug your loved ones. And take care of your health - get chest or arm pain evaluated immediately, especially when they occur in combination.

I went from finding out that news to watching the Grey's Anatomy season finale with my mom, although I couldn't believe she sat through it -- it was all about a shooter taking over their hospital, which is something my mom has lived through. She said she didn't need to leave, and that watching the episode didn't bother her. (If one of your goals in life is to become totally unflappable, you might try being an emergency room nurse for 30 years.)

I can't even really talk about it yet sorrow: A family member's child was just given an autism diagnosis. They're in shock, of course. And I know that they're going to be fine, but it's going to be hard and I have been crying a lot for them. I'm also almost at a loss as to where to start - I have so much critical information to impart. My mom thinks they should begin with Alison Singer's presentation on Parental Perspectives and Supporting Families. I think I should show up on their doorstep, as their own custom 100 days kit. But we'll start with email and phone calls. Please keep them in your thoughts.

And today is my dad's birthday. He would have been 75. Seymour and my mom honored him by bumming boxed lunches off the Hacks & Hackers meetup folks at Seymour's workplace, and enjoying the meals-for-which-the-did-not-pay in a nearby park while Mali launched anti-shyness attacks on passersby. I miss my Dad so much.
at May 23, 2010