A Lot of Deliciousness

Too many wonders, too many activities, too much fun, too many friends, too many opportunities, too little focus, too few hours = too little sleep. This action-packed life is wearing me down and haggardizing me something fierce - but at least I got my hair cut + re-technicolored so I look somewhat like the woman I'd like prefer to greet in the morning mirror: 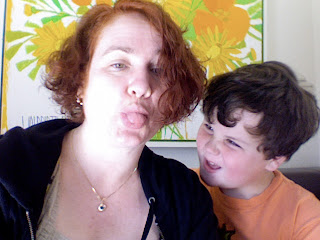 What else? A lot.

I've started going to yoga for the first time since Leo was two. And I'm in pain, but it's the kind of pain that just makes me angry because if I had been taking care of myself, there would be no pain. The pain, it will go away, and I will be a strong springy bendy doll once more.

Leelo competed in his first Special Olympics today! He ran (okay, walked then skipped) the 50-yard dash, did the softball throw and the long jump. It was wonderful to see him and his friends and peers having such a great time - and seeing so many kids with special needs together and knowing they were only represented a portion of the local public schools' classes made me wonder where all Leo's friends are all the time, about town? We need to do a flash mob, seriously, so people know just how many kids of ours there are. Maybe Sunday, June 6th,  Strybing Arboretum in SF (free, fenced, though there is at least one small lake and a large fountain) at 10 AM, which should be early enough to find parking? Meet near the big fountain in the middle of the Great Meadow?

Two weeks ago I went to an autism art auction and benefit, which was pleasant fun until the bidding started and I was required to compete for my own son's artwork. Which I won. Isn't it beautiful? Leo's first guided art painting: 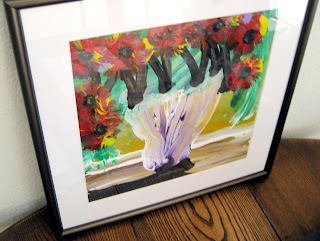 The store that sponsored the benefit, Jigsaw Java, also sold jigsaw puzzles made from all the kids' paintings. Leelo's not up on the online store yet, but I've been told it will be, soon. If you're local you can definitely buy Leo's puzzle, called Flowers for Me, at the store itself.

Leo continues to love music. I am trying to find someone to work with him, may possibly have found a drumming instructor if we can find a way to wedge those lessons into our overfull schedule. Here is he guiding his dad through some tunes on the Kazoo. 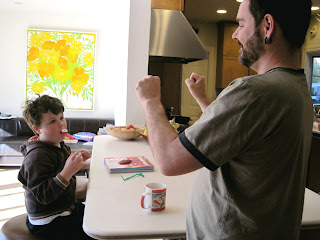 We got Leo an iPod touch and he LOOOOVES it. See? His sisters might like it more than he does, though, so we are being coy about where said iPod lives when Leo is not using it. But damn, iPod/iPad/iPhones, they are made to work with kids like Leo - touch & drag interface is intuitive for him, and I keep stumbling on apps that work just right for him - but please let me know if you have any favorites for your kids as well. 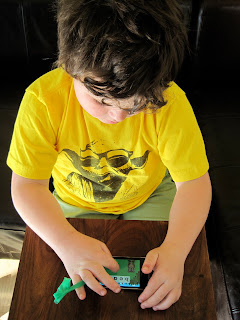 Don't leave your iDevice unattended in our home, is my advice to you. See what happened to Susan's iPhone? 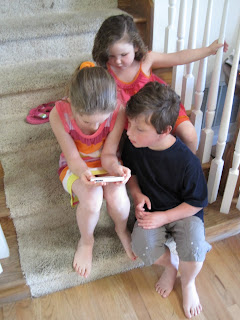 Swimming season has opened at our house, for those impervious to the cold and wet. Which apparently includes Godfather Michael the BUNNY-HATER: 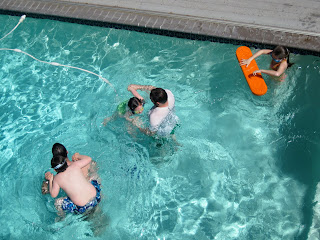 Did I tell you that Iz got the lead role in her school play? Which starts in two weeks? And that I usually don't let her audition for plays because of the parent commitment required, but figured that she'd be a flower or scullery maid because she hasn't been part of the school theatre scene for 2.5  years? So I am proud of her and she's doing really well but wow. Lots of work for me even though I was careful to choose all offsite tasks. I will complain to you because Iz must never know how bummed I am about the extra work. Though I will execute it to the best of my ability and without complaint IRL, and she will shine.

She has sooooo many questions about the Marvel Universe, and Marvel 1602 specifically. Why, for instance, was Charles Xavier Spanish? And who is that Natasha, the most dangerous woman in the world? I am a Marvel noob (though I'm greatly enjoying the Civil War series, which I picked up from the half-price DANGER DANGER rack on Free Comic Book Day) and am not much help, not yet. I am educating myself, and am enlisting knowledgeable sorts to talk comics and feminism and history with her, and am racing to read ahead of her - she reads so damn fast.

Mali, who is pissed that Emma Frost isn't in the X-Men movies, continues to be our entertainment channel. Check out this video, which I took yesterday for an upcoming review. It's a word substitution song. Our cheeky girl sang about fairies and flowers and then BEER. I suspect it's an X-Men/Wolverine influence, but, again, you can imagine my pride.

And here are some other gems from her from the past two days, a few of which I've tweeted already:
And that is the tip of the firehose. Hope you all have a loverly, firehose-free weekend.
at May 08, 2010