Why I Always Buy Raffle Tickets 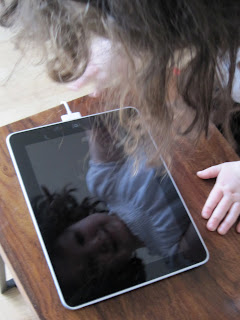 My Dad entered every last contest he ever came across. If you didn't know that about him, you might have assumed he was amazingly lucky, because he was always winning things - tickets to movies, restaurant meals, electronics. He even won a VCR, back in the day when they weighed 30 lbs, came in two pieces, and almost no one had one. It was cool to have the dad who always got free stuff.
I don't quite have his work ethic, but I do try to buy raffle tickets whenever I can, especially if they are for school fundraisers. Apparently, this is a good strategy, because in 2008, I won a Vespa.
And today, through Iz's friend Merlin's school raffle, I won an iPad!
We all love it. We're all trying to swipe it from each other. We're all in its thrall.
I was a bit skeptical at first, considering it redundant in our newly-initiated iPod touch household, but it's really damn cool, and works better for Leo in many ways.
The bigger screen area is so, so, so much easier for Leo to manipulate. We're still working with him on positioning his hands so his passive hand's fingers don't creep onscreen, and on keeping his active hand in pointer position so its non-pointing fingers don't drag, but wow. He loves it so much he's been grabby with it, which doesn't usually happen with non-food items. He applied his iPod navigation skills instantly, which may motivate acquisition/reading of its menu words. He loves watching his favorite videos on the beautiful clear screen. Motivating, motivating, motivating.
The only issue will be, again, fighting over it - his dad and his sisters love it, crave it, need it - can't you tell they need to have it right now? Seymour specifically geeked out on public media sites like NPR and KQED, both of which look great in iPad format.
Since she was mostly denied access (Leo's not really sharing when he has a choice), Mali wrote out an entire new group of apps that she would like our iPad to have. The one she really wants app developers to get a move on is "Poop," which she says features animals that poop every time you poke them, and to me sounds like a variation on Peppa Pig's Happy Mrs. Chicken egg-laying game. I do like her icon designs, though. 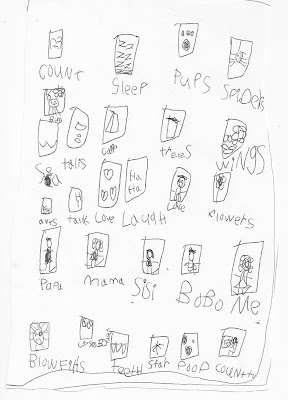 Yay for raffles! Yay for devices that make our entire family happy! Yay for non-food items that engage Leelo so wholly!
at May 18, 2010