I Wonder If You Can Really See My Son

Leo and I had such a lovely day together -- a pleasant day, a day an NT kid might grumble about, running errands and going on outings. Leo was a great sport, and good company. But I suspect that we may have looked odd to anyone unaware of Leo's challenges, or who doesn't know how much effort Leo, his family, and all the dedicated professionals and educators who have worked with him over the past seven years have put into supporting him, into helping him look merely quirky rather than out of control.

So, theoretical observer, let me interpret for you, in case you are curious about kids like Leo when you see them out and about, and wonder what is actually going on with that funky kid and his or her parents. Let me elaborate for you, explain to you just how successful our boy's day was.

At the Soccer Field

We started our day accompanying Mali while her team took soccer pictures, as Seymour was at another park watching Iz play her own soccer game. We were surrounded by lots of yabbering small children. I held Leo's hand the whole time, which might look funny as he is obviously not a small child himself. Why do I hold his hand? Because it makes it less likely that he will bolt. Because noisy, swarming little kids sometimes make him skittish, and holding my hand can help him feel calm. It also prevents him from engaging in his latest stim: spinning and stomping:


While we were waiting for Mali to stop making faces at the camera, I introduced Leo to several parents of kids who knew Mali. After I told Leo each parent's name, he replied on his own, "Hi, 'Name.'" This elicited big smiles of delight from several parents who knew of Leo but had never really talked to him before, and didn't realize what a friendly, polite kid he is.

Successes:
What we need to work on: Spinning and stomping. I'm worried that this is an OCD behavior. It's time for us to visit his behavioral psychiatrist anyhow, to monitor his blood sugar levels and liver function (Risperdal being a black box med that requires consistent checking in) so I will ask about the behavior then.

At the Coffee House

After Mali's pictures, we went to our wonderful local, autism parent-owned coffee shop, Cocoa Java, to wait for Seymour and Iz. Leo spied bagels in the food case the moment we entered the cafe, but I asked him and Mali to sit down at a table and wait while I ordered their food. The person working the counter had a workflow pattern slightly incompatible with child patron happiness -- she handed me their donuts on plates immediately, but then went off to make my single-drip coffee before taking my money. So. I had to wait at the counter with the kids' food until the barista finished up, as any donuts I put down on the table would be inhaled instantly, and then there would be impatience while I drank my own coffee when it finally arrived.

While I was waiting, Leo asked me for bagels several times, from across the cafe, in his standard request format, "Want a bagel, please?" It might have appeared odd to another patron, my son's continuing to ask me for a bagel after I'd already told him no. But for Leo, it was a form of self-soothing and processing -- he really wasn't going to get a bagel, that blew, and he had to deal. Eventually the coffee arrived, I sat down, and we all enjoyed our coffee house treats.

Successes:
After a while, Seymour called to say he wouldn't be able to meet us, as Iz's post-game soccer photos were taking forever. I dropped off Mali with Seymour so he could take our youngest to her own game  after Iz's pix, and drove Leo home to his session with Therapist V.

Seymour and the girls left for a daddy-daughter hootenanny shortly after Therapist V finished his Leo session, which meant Leo and I had the afternoon to ourselves. We immediately took off on one of our favorite mother-son excursions: buffet lunch at a local Indian restaurant.

Once we entered the restaurant, I let go of his hand so he could feel more independent. He then did a giggly happy dance -- the dance of anticipatory naan bread joy. But he wasn't too loud and it didn't last more than fifteen seconds -- if he had been genuinely disruptive to other patrons, we would have left. We've been customers since before we had kids, so the restaurant staff knows and doesn't mind Leo's quirky behaviors.

Leo followed behind me as I pillaged the buffet, asking me for naan bread every thirty seconds. I reassured him each time that he could have it -- but not until we sat down at the table. He remained calm.

Once we sat down, I tore off pieces of naan bread and handed them to him individually, usually requiring that he answer a question correctly first, such as "Who likes naan bread?" (Leo's response: "I do!")

My behavior probably appeared very odd and controlling -- a helicopter mom hand-feeding her chubby son -- yep, that family's got some food issues. But there was actually a lot of work, progress, and practicing going on, for those who knew what to look for. 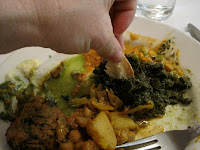 Every time I handed Leo a piece of naan bread, I was dipping it in my saag -- right in front of him, so he could see what I was doing. (Saag is spinach cooked down and pureed with onions, butter, and spices. And, at Suraj, with a definite chili kick.) 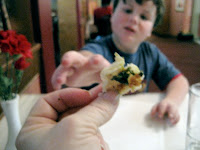 As you can see, I put more than a speck of saag on each piece of naan. What you can't see, because I positioned the bread in this shot for saag-daubing display, is that every other time I handed him a piece of naan, it was with the saag facing Leo -- I was not in any way attempting to hide what I was feeding him. He ate every single piece. Happily. 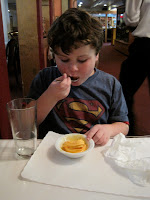 He then asked for ice cream. Since dessert is included in the buffet (self-serve mango ice cream, mmmm, though I had chai and gulab jamun), I got him a bowl of the orange stuff. He ate the entire thing himself, with his spoon. His grip is still a little bit awkward (fine motor/grasp issues), but he ate all that ice cream all by himself. He even spontaneously mopped up drips! (See video.)

Successes:
Number 5 is the one we're still really working on, the preferred food compulsions. Seven years of ABA and we still need to monitor all preferred food items, other wise he'll sneak off and/or snatch and bolt them -- as he did in that SF Weekly article about him and his iPad.

Side note: I'm still disappointed in the behaviorist/SF Weekly commenter who declared Leo's food snatching a behavioral failure -- what a dick. As if ABA therapy implants an on/off switch or guarantees 100% compliance! I'm glad my mom and so many other people chastised him for being unable to look beyond that one incident and appreciate the article's lauding of Leo's many successes.

Side note #2. Leo's food snatching has spawns some interesting side effects: He's getting sneaky and plotty, which IMHO demonstrates a degree of Theory of Mind. A few weeks ago, after swimming in our pool with his sisters, I asked him to run in the house and get dressed while I spent 120 seconds closing the pool -- running in the house and getting dressed independently being what he does after every pool session. However, at some point earlier in the day, he must have spied our new jar of Nutella on the top shelf where he was not supposed to be able to reach it -- because when I came into the house, he was standing on the counter -- naked -- with the Nutella jar in his hand, scooping it into his mouth as quickly as he could. Quite the sight -- but I was laughing too hard, and working too hard on not letting him see me laugh, to get a picture.

At the Hair Salon 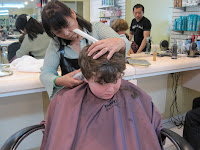 Leo let this lady cut his hair, without any significant behaviors. He squawked and fidgeted a lot, initially -- which I'm sure drew quizzical glances from the other patrons -- but once I brought out his iPod touch and held it in front of his face so he could watch Ben 10, he settled down. The stylist was then not only able to chop off his luxuriant glossy curls, but she was able to buzz a clean line around his ears and neck. 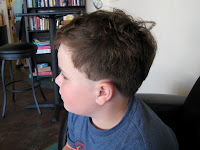 The result is quite striking, I think -- don't you? Handsome boy! Though I do cry quietly every time we have to cut off those beautiful curls.

Successes:
Leo, with our and his team's support, is still working on some of his issues -- the food bolting especially (we're going to be formulating another new approach, both at home, and with his teacher at school). But I hope this rundown of Leo's today helps some people appreciate that, when you see a kid like Leo out and about town, perhaps instead of thinking, "Why is that kid behaving so strangely," you could ask yourself, "I wonder just how hard that kid is working."

Because I bet you anything, those quirky kids -- they've worked their asses off, just to be able to leave the house and appear in public. In Leo's case, the goal isn't even to blend in, but rather to be able to grocery shop, eat in a restaurant, go to the park, or get a hair cut without disturbing anyone else, or causing a major incident. We got through the entire day without having to abort a single errand -- quite an accomplishment for such an easily overwhelmed boy.