iPad Apps for Kids With Autism: Fun Ones! Cheap Ones! Free Ones!

Leo's love affair with his iPad continues! It helps that we keep finding fun new apps for him, and that those apps are often either free or inexpensive. We <3 you, app developers! Keep the free and low cost innovation coming!
Here are three of Leo's current faves, apps that engage him for long long stretches. I know that they're helping him with a variety of fine motor, composition, and social skills -- but from his perspective, they're just fun. Which is something he has a hard time finding on his own. Ah, self-direction. Stick around for a while, will you?
Faces iMake 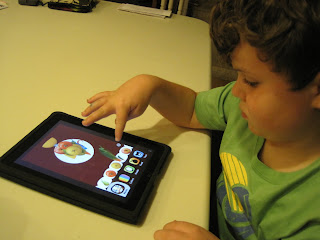 I've written about Faces iMake by Imagine Machine before -- it's much beloved by our entire family. Leo scored his copy for free through the wonderful Moms With Apps App Friday program (oh, hey, look, it's Friday today!), but it's now available in a free Lite version.
Leo doesn't do a lot of face-making at the moment -- he's a more free-form collage guy. But he certainly enjoys playing with all the easily accessible elements, as you can see in the video two images below (he's playing with the Lite version). 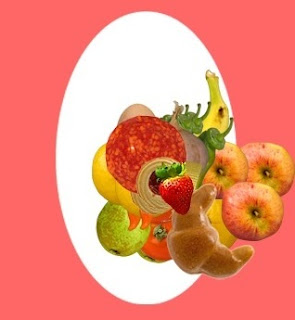 Here's one of his creations. I think it displays his budding talent for color composition and complement (e.g., he changed the background color after creating the collage), something he's been demonstration with clothing choices lately as well: if his new shirt has an orange pinstripe in it, then damn it, he is going to wear his orange shorts -- and there will be vocal protests if we suggest otherwise.
Draw With Stars 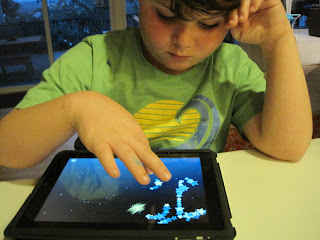 Another great play/art app that we also downloaded via MomsWithApps is Draw With Stars. Its interface is simple -- touch the screen to draw, but if you touch a star you've already placed it will fly off screen. For Leo, whose autism symptoms include fine motor challenges and a touch of OCD, it's incredibly engaging. He gets to practice drawing in a free-form environment,  work on his fine motor control, experience cause-and-effect (don't cross the streams!), and methodically clear the screen, in great swaths or star by individual star. He considers this app great fun. 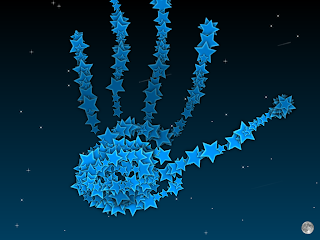 This is my very favorite drawing of his so far -- I've made it our iPad launch screen. Though I'm surprised Leo didn't add more than five fingers -- he's aware that hands have five fingers, but considers the concept limiting, and, as an artist, likes to add three or four extra digits.
The video below shows him starting a Draw With Stars session (he eventually cleared every last star off the screen). Note also how, erm, well-loved the screen is. And his, um, ambidextrousness! (Yes, I will be sending this video to his fantastic new OT at school.)
Fruit Memory 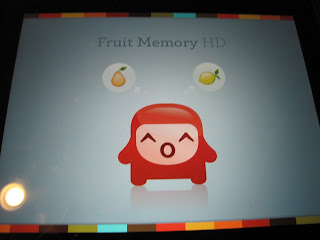 My personal favorite of all his new apps is Fruit Memory, a variation on Concentration created by Paul Mayne. I found it via a recommendation from my friend and probably most favorite blogger of all time SJ. Fruit Memory is not free, but it is only 99 cents.
Fruit Memory's design is adorable. You can't argue with me on that point -- it would be like condemning kitten videos or cats who blog. Which simply isn't done, not by civilized people. 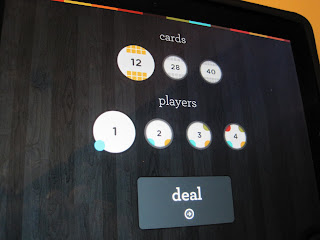 I like Fruit Memory is because it combines one of Leo's strengths -- his strong visual memory -- with an optional social interaction element.
Again, it's a Concentration game. Players can choose the number of tiles and play alone, or -- social element alert -- with up to three other players. Which means turn taking practice! Which Leo needs! 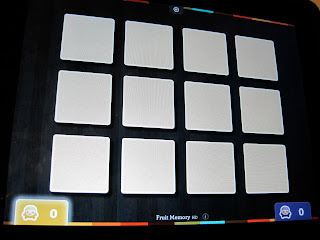 Each person's avatar lights up when it is their turn --- again, a nice visual cue, helpful for Leo and his visuall-oriented friends. 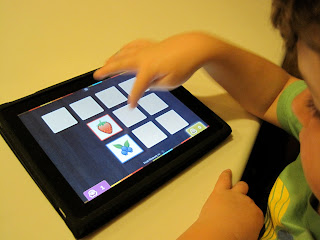 Here's our boy playing on his own -- you should see the speed at which he dispatches each game. (the app is also good for practicing fruit names.)
And you won't get to see a video of this one because I'm a little bit bitter -- every time I play Leo, he kicks my ass. By a margin of several points. Which, when you're only dealing with six points total on the lower level -- you get the idea.
If you get any of these apps for your kids -- or if you have them already -- let me know what you think. Or if you have any tips or tricks or uses we might not have considered.
at September 24, 2010