Now that Leo's had his iPad for nine months, I have unsolicited advice for potential iPad owners:
GET AS MUCH STORAGE AS POSSIBLE.
Poor Leo -- he thinks of his buddy the 16 GB iPad as the ultimate repository of every last app, TV show, movie, and songs he loves loves loves -- but, sadly, his friends can no longer play together because his iPad had run out of space. And as his cherished apps and shows disappear to make room for new and different ones, our change-rejecting boy who has gotten so used to having all his favorite media and apps in one place is going to become very sad.
This apps/video iPad shuffle will only get more complicate as  apps become increasingly robust, content-wise. I would love nothing more than to get our chemistry-lover Iz The Elements iPad app so she can explore the periodic table in depth, with 3D animation. She still has an iTunes gift card in her holiday stash; The Elements's $13.99 price tag isn't the issue -- the problem is the app's 1.71 GB size. We can't blow out an eighth of Leo's iPad's existing content for a single app. It's not going to happen.
So, sigh, and if you're about to jump into the iPad market, please listen to me and buy as much storage as you can!
---
Meanwhile, we're backlogged on telling you about the apps Leo and his sisters like. Here are four favorites both new and revisited: 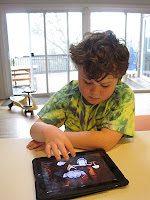 Count TV ($2.99)*: An entertaining app that encourages understanding of 1:1 correspondence, i.e., that the amount two means the number "2." We've had this app since June, but Leo always goes back to it. The interface is simple: The Count does a short intro upon launch, then a nine-number grid appears (see above). Click on each number to watch a classic number-themed Sesame Street video. Leo gets yet another context for the numbers he's still struggling to understand, and I get to share videos from my childhood with my own kids. Win-win. 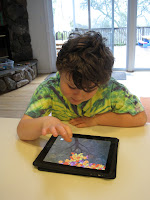 Another very simple app Leo likes is Leaf Jam ($.99)**. This is an app I suggest to Leo when he is agitated and needs something to soothe and engage him without making too many demands on his overtaxed senses. (He also chooses Leaf Jam independently.) Tap the screen to make leaves appear, tilt the screen to move them around, click the rake icon to clear the screen. Leo really enjoys tapping/adding leaves in time to the pleasant banjo background music, as you can see in the video: 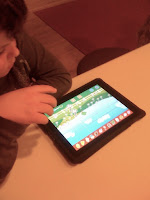 I'm excited about Moozart ($1.99)** for Leo, on so many levels. This app lets Leo play his favorite songs, then explore and experiment with them -- and with the basics of music  and music reading. While being completely silly!

When Leo presses Moozart's Play button (which he recognized instantly, thanks to the app's good clean design), each song's notes appear as icons (pigs, bells, farmers) on a real music staff. Leo can delete or add other note icons from the bar above the staff, while playing an existing song or using a blank staff. Fun! (Though I couldn't find a way to save his creations -- he doesn't mind but other kids might). 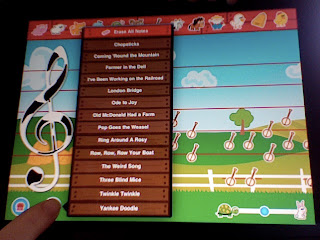 Moozart doesn't require users to know note names or time values -- if you place them in the right spots (and each time you move the icon to a new position on the staff, it sounds out a preview tone), you'll get the right note. Time is determined by horizontal spacing -- no worries about knowing eighth or half notes. Moozart allows non-readers to dabble and compose with abandon -- within the staff's range, at least.

Reading is not necessary to play with the music, but it is necessary to choose a song from the app's song list, and this is where Leo surprised me. Moozarts' song list, unsurprisingly, overlaps with Leo's beloved Tappy Tunes's song list. Leo has memorized which Tappy Tunes song titles stand for which songs, but it wasn't clear to me if he'd memorized their positions or their appearance. With Moozart,  Leo instantly selected favorite songs like Pop Goes the Weasel independently, the very first time he used the list. My son has memorized entire phrases! So, Moozart helps reinforce Leo's sight-reading (and generates much whooping and praise for our boy). 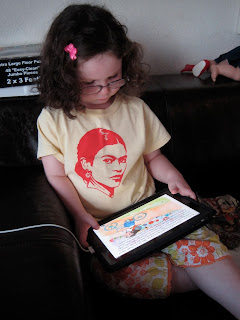 One iPad benefit will never get old: I love interactive books that let pre-readers like Leo experience books independently.

Leo's little sister Mali happens to already be a reader. She is also a big fan of the interactive book app Frida's World ($2.99), as am I. Frida's World is simple, well-designed, and the story and illustrations are adorable and age-appropriate without reducing Frida Kahlo's biography to twee. So now my six-year-old is knowledgeable about the life of Frida Kahlo and wants to know more! There's even a coloring book mode.

Another benefit: Frida's World has both English and Spanish modes, which Mali appreciates as she goes to a Spanish immersion school and is always looking for fun ways to practice her Spanish.

My only quibble: When in autoplay or "listen to book" mode, I would prefer to have the words highlighted as they are read. But this is a teeny quibble. Frida's World is a very cute and worthwhile app that lets sneaky parents like me inject a bit of culture into our kids' lives.

*Gifted to my kids by the developer.
**Free through Moms With Apps and their wonderful (Free) App Fridays.
at February 08, 2011