Rainy Day Apps Leo Loves (and One Mali Loves, too)

Leo is out of school this week, which is why you haven't heard much from these quarters. We intended to spend the week hiking, but instead we spent our time stuck inside, watching rainstorms, rainbows, seeing the soaking-wet trampoline steam when the sun makes a brief appearance, and wondering whether we're going to have our first-ever snow.

Thank heavens for Leo's iPad. Our house is well-stocked with books, videos, and activities, but the iPad gives Leo so much leisure- and learning-time independence and encourages so much self-direction -- it has made our rainy week several degrees more doable. Here are some of the apps Leo's been using the most lately: 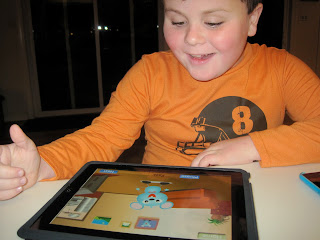 As you can see, Leo gets giddy over Speech With Milo: Verbs ($2.99) and the new Speech With Milo: Prepositions ($1.99). The interface is somewhat text-based, but it is also consistent & predictable, and Leo has learned to navigate from screen to screen. Leo can use all the quality language-building (as opposed to communication/AAC) apps you can create, developers, so please let me know when you're ready to open those floodgates. Leo & his peers are waiting. 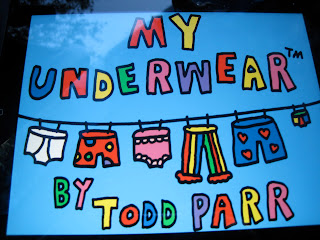 My Underwear ($2.99)* is the cutest damn app. It was designed by Todd Parr so the graphics are whimsically excellent. The games and activities are simple and fun, and Leo enjoys them -- games like "catch the falling underwear" are  just unpredictable enough to keep him on his toes, while remaining straightforward and not-overwhelming. 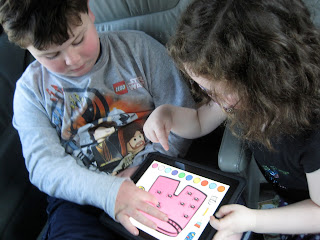 Another lovely bonus of My Underwear: sibling interaction facilitation. That's a fancy way of writing that OMG Leo & his little sister play My Underwear together! Not something we see a lot of -- Mali is wary of her sometimes volatile older brother. But with My Underwear, Mali is not just willing to play it with Leelo, she's patient and kind (two words we don't use a lot with her, awesome as she is) in showing him what to do if he gets stuck. Thank you, Todd Parr! 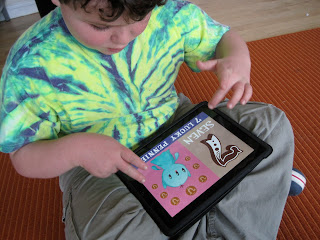 Silly Numbers $3.99 was recommended to us by Danielle Samson, an SLP and an iPad/AAC/apps expert. Leo is a sucker for apps with good music. I am a sucker for any app that encourages Leo to independently and repeatedly review subjects in which he needs support, like 1:1 correspondence and counting. This is not a terribly complicated app -- each screen shows a number from 1 to 12, then that number of objects appear onscreen. But it is interactive -- you can tap the objects to count them over and over again, the animations are cute, the voiceover and text includes adjectives, e.g., "One Tasty Pie," for some stealth extra learning, and the design is top-notch. 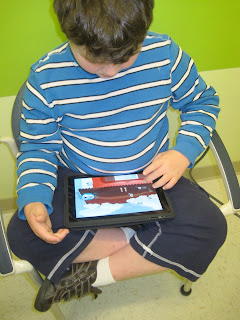 The Itsy Bitsy Spider ($.99) by Duck Duck Moose is not a new app but it is new to us, and was another Danielle recommendation. If you know Leo you know he loves music and singing his favorite songs, like the eponymous tune. Getting to play that tune over and over again while fiddling with pages full of animated extras means even more loving. And that loving is ever helpful in situations where Leo needs distracting from what he doesn't love, for instance visiting his pediatrician (thank you, Duck Duck Moose!). 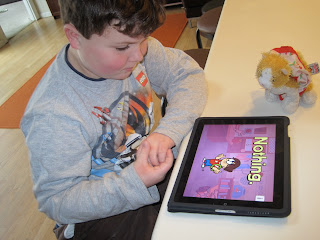 Andrew Answers ($2.99)* is an interactive book supporting language building through word play, repetition, and cheekiness. It also has interstitial activities during transitions, which Leo appreciates. His sisters think Andrew Answers is hilarious, so do I. Though if your kids are clever enough to model Andrew's sassy way with words, you may be in for some exasperation. 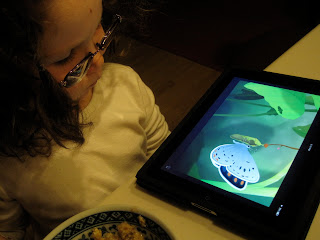 Little Bella - I Close My Eyes ($.99) is a charming interactive book, and a favorite of Mali's (and a final Danielle choice). Little Bella is an imaginative girl whose animated adventures play out every time she closes her eyes -- as she dreams about being a butterfly, flying, diving like a dolphin: I'm honestly surprised by how inexpensive this app is, given the quality of its art and animation.

I am backlogged with apps to review and will be talking about more of them (and adding them to the iPad Apps for Autism spreadsheet), soon. Once Leo's routine is reinstated, most likely. 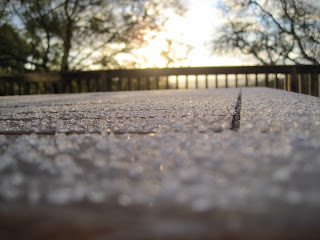 2/26 update: Is this snow on my backyard picnic table? Not sure, but that's what we're telling the kids! We Californians have to get our wintry thrills however we can.

*These apps were gifted to Leo by the developer. Which has no bearing on my review; I am featuring these apps because my kids genuinely like them.
at February 25, 2011