Last week was hard -- for Leo, for me, for the kids. No school for Leo (winter break), plus his beloved Therapist V was out introducing his offspring to snow. I'll list the mood-deflating stressors at the bottom of this post, only because it's disingenuous to dismiss them. But I will tell you what cured both Leo's and my blackened blues: A California snow-to-sea day! Yes, we had snow in the Bay Area. This is at the top of Skyline road and Tunitas Creek, for local location spotters. We were the only folks there, which I found astounding.

It wasn't much of a snow (I used to live in Syracuse), but Leo and Mali had never seen the stuff first-hand, plus it was enough to throw snowballs at each other and coat hands with cold fluffy powder. Playing in the snow was enough of a thrill, but we then realized it was only thirty minutes from there to the Fitzgerald Marine Reserve in Moss Beach, which was at low tide and just waiting for us to come tidepooling.

Mali was especially excited -- we told her that tidepooling would let us see lots of sea creatures not usually exposed, so she shrieked "Mermaids!" and bounced away to find them. We didn't find the mermaids, but we did find a beach where Leo was happy to clamber around on the rocks, pick his way through the tide pools, and run on the beach. Seymour found huge whole abalone shells, an abalone kitteh, starfish, a huge piece of bullwhip kelp that generated many Raiders jokes, and we all scrambled along and joined in the fun. Until we started realizing that it was damn cold (Leo and Iz were first, Mali never clued in as she has no internal thermostat) and set off for home.

Except you know what's on the way home? The Princeton docks where the fishing boats sell their wares. Three enormous Dungeness crabs ended up riding home with us. I didn't realize the crabs would need to hang out in our sink until we cooked them. So I almost peed my pants when I reached over the sink to get a glass of water and a big crab reared up at me. GAAAH!

Mali felt for the crabs, mostly. She didn't want to eat them, and she tried her best to help them understand their fate by writing a warning in Crab Talk, describing the "brain-cutters" that were coming for them: Crab-rearing and Crab Talk video demonstration video. Note that once the crabs were cooked, Mali had no problem smashing them open. But she still wouldn't eat them.

By the time we finished our crab dinner and put the kids to bed, I was recovered from most of the previous week's depression & disorientation. Then Seymour came back from a beer date with a local mushroom foraging buddy bearing these beauties: 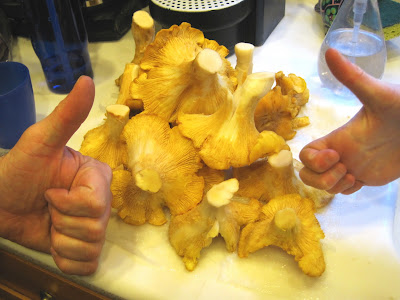 That would be two pounds of enormous fresh chanterelles. Enough to feed our entire family and six hungry Canadians for dinner the next day.

I love Northern California. Sometimes just living here is all the cure I need.

Now, as for the black week leading up to the curative weekend -- I had just come from a wonderful weekend with three of my favorite people and my wonderful mom. So what the hell is wrong with me?

I have to tell you, I'm not sure. I had The Best Time Ever during our writers' retreat -- but it was not restful. Quite the opposite. I came home trashed from all the face time, even though I wouldn't have changed anything, not one thing, about our weekend.

And I came home to the instant stress of trying to work with all three kids out of school plus Leo disoriented from routine disruption, topped off by five forecasted days of rain, which blew out any chance my preferred mood booster: getting outside, as described above. (The one time I did haul the kids out into the redwoods, Leo refused to hike for more than 50 yards. I'm still not sure why.) Seymour was very supportive, even took time off work to sit on the monkeys while I gave iPad presentations via iChat to educators in Tennessee.

But mostly, I can't stand it when Leo is sad, and there's little we can do. He spent the week on a crying jag, sometimes even crying himself to sleep. We think it may have been a bit of a stim, but it was rooted in real distress -- and he can't tell us how he feels, or why he was crying. We could only try to comfort him, which sometimes he liked and sometimes he really didn't.

Leo's difficult mood meant curbside pickups only for Mali after school, as I didn't want to bring her brother's unpredictability onto her crowded playground. It's hard enough for both of them when he's grumpy -- he tends to fixate on her as the source of his discontent whether true or not, and we have to keep them separated.

So, it was a hard week. By the time I took Leo to his ophthalmologist for his annual full workup (I tend to schedule all his recurring medical appointments during breaks, which in hindsight probably doesn't help much with his stress level), I was nearing the breaking point. Leo was too unsettled to stay in the waiting room while we waited for his eyes to dilate, so we asked the front desk to give us a call when Leo's turn came, and waited in our car. I helped Leo play with new apps like Swapsies, he played with perennial favorites Silly Numbers and FirstWordsDeluxe on his own, and I spent the entire time trying to imagine my sadness as a wave being sucked back down off the beach and away.

That worked until we came back into the office and the doctor casually asked how I was doing. Then I lost it. Which made me mad because for all I knew, my crying was reinforcing negative stereotypes about autism parents. I just wanted to share Leo's information with her, and tell her that, actually, he was doing really really well, and ask her some questions. But all I could do was sob. She was very kind and hugged me and took care of us well. I adore her. (If you're a Peninsula resident and don't already know who the best pediatric ophthalmologist in the area is, I'd be happy to tell you.)

Also mood-spoiling: I caused a misunderstanding at work, with one of my favorite people in the whole world. Which probably put her in a shitty position, even though she'd never tell me. Which just sucks. Even though she says it's worked out.

And people we love keep getting divorced. Which Leo can't understand; one of his favorite verbal stims is to list pairs of his favorite local people circa 2005. Only problem is all of them, with the exception of one couple, have split. So I listen as he lists each emotional trainwreck in sequence, and I praise him for his great memory. Then I cry again.

The absurd thing about being so low last week is that there was so much to celebrate and enjoy.
If you made it this far, leave some advice, pat yourself on the back, or knock back a shot.

I'm processing, mostly, and am just so glad to have forests and the coast to cure what ails me.
at March 01, 2011