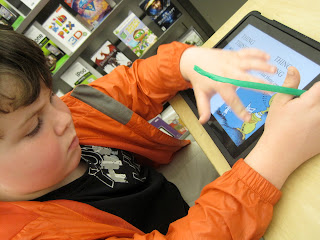 So, yes, sigh, we don't have an iPad2 yet. We are planning to get one for Leo, but it may be a couple of weeks. Did I sigh already? I did.

We have checked out iPad2s, though. Leo saw plenty of them when we cruised our local Apple store on Saturday (my MacBook's battery died, plus Leo isn't terribly enthused about watching Iz play soccer, so the two of us needed an alternate game-time activity). iPad2s were everywhere at the Apple Store -- two guys giving iPad2 demos at the doorway, we passed a table full of them as we walked to the Genius Bar, and they were in ecstatic customers' hands. Everywhere, that is, except on the shelves. The store was completely sold out, and the staff say they haven't been told when their next shipment will arrive. So, if you don't have an iPad2 yet and want to get one ASAP, the store staff says the best though not ideal option for impatient types like yours truly is to order online.

Leo was a champ the entire time we were at the Genius Bar, contentedly exploring his new Dr. Seuss interactive books: Hop on Pop*, The Cat in the Hat*, The Cat in the Hat Comes Back*, and I Can Read With My Eyes Shut* ($3.99 each). I said it before, I'll say it again -- these Dr. Seuss apps are fantastic. By letting Leo "read" the book to himself at his own pace, they reinforce his classroom-based sight reading learning. I showed Supervisor M the video of Leo "reading" Dr. Seuss's ABCs, and she agrees -- interactive book apps with individual word playback are a great way to supplement Leo's reading. I would love to see individual word playback in as many apps as possible, really. 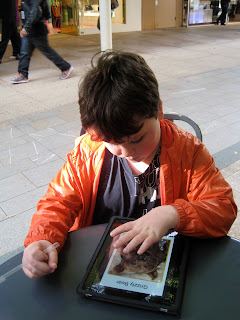 One of the Apple store employees recognized Leo from the iPad video, which was sweet though Leo doesn't seem to realize why people know who he is. I was a bit surprised as Leo was wearing a completely different outfit than he wore onscreen. When we got home, Seymour teased me that I keep dressing Leo in the African animals shirt he wore in the video, and I admitted that it was true -- but only because Leo has two of those shirts,  so they tend to be available more often than their drawer-mates. (And that is the reason why he wore one in the video.)

Leo's good behavior and marvelous memory scored him a treat from the bakery next to the Apple Store -- he knew exactly what goodies we'd be in proximity to, the moment I parked our car, and he waited patiently throughout my entire store visit.

We sat down at a cafe table to enjoy Leo's treat, and he jumped into a suite of apps that I've not written about yet: Kindergarten.Com's free flashcard apps. They are good for learning and reinforcing labeling, and cover topics like Zoo Animals, Emotions, Actions, What Goes Together. Sometimes they are too specific for generalizer kids like Leo who are perfectly happy with Monkey rather than Spider Monkey, and they make assumptions about kids' knowledge (why on earth would Leo know that a golf club goes with a golf tee?), but overall -- and for free -- they are useful apps, especially for kids who are in the earlier stages of expressive and receptive language acquisition.

Since no such fix is currently available -- or is ethical or legal, at any rate -- we opted for the next best thing yesterday -- an outing at our very favorite beach. Look, one of Seymour's bloggers wrote a post about the beach's geology, just for us! (OK, not really, but the writer's timing was excellent.) Even on a cool gray March day, we and our new friends (I'm trying to find a man-friend for Seymour) and all of our kids had the best morning ever finding hermit crabs, anemones, chasing waves, tossing driftwood ("mermaid pens!" said Mali), and letting the pebbles run through our fingers and toes. No sibling anything, not on that beach. It's almost magic. And we had that magic all to ourselves. Can't really ask for more. 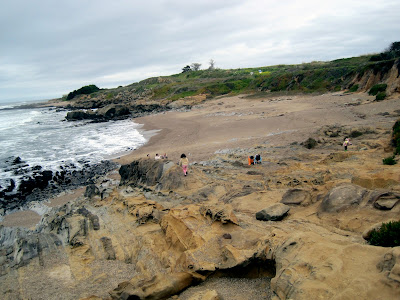 *Leo was gifted these four apps by the developer, OceanHouse Media, however I have purchased five of their other Dr. Seuss interactive book apps myself -- and Leo uses all nine of them.
at March 14, 2011