Leo in the Apple: iPad - Year One Video

So Leo, Iz, and I were in Apple's iPad: Year One video, which a very thin Steve Jobs introduced at the Apple iPad2 launch event in San Francisco. (I winced when the word "Thinner" appeared above Jobs's head in reference to the iPad2, did you? Even though he sounded hale and appeared to be enjoying himself thoroughly.) I was as thrilled as any other Leo-fan watcher to see our boy appear onscreen, as we were never told (though Seymour had his suspicions) what the iPad shoot we'd done in early February was for.

Check out the video if you've not seen it yet: Iz appears for just a flash at 1:20, playing her piano, Leo starts bouncing on his trampoline at 4:40, then I start talking about what autism means for Leo, and how his iPad has given him a large dose of the independence he so deserves. I've been told that the autism section of the video is rather affecting, so have a hanky or dry shirt sleeve at the ready: 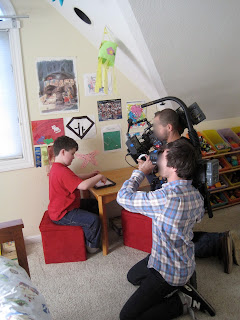 I wrote about the top-secretness that was the photo shoot at BlogHer. Details I didn't mention include:

Jennyalice spent her birthday onsite at the shoot, being Leo's best friend. She sat with him and played with him for the entire morning, while I had my makeup done, helped the crew with logistics, and talked to the camera. Jen's role got really interesting once we realized the crew had, in transforming my kitchen into a set, accidentally locked down all Leo's food. Jen somehow kept an unsettled Leo happy and engaged through what is usually his lunch hour, then turned around and picked up both the girls from their respective schools and got them back to the house in time for their own shooting sessions. Again, on her birthday. *Mwah* to you, Lady.

I was so tired and the shoot happened so fast that I didn't have the time or energy to get the house tidied like I wanted -- and certainly never worried about the garage, which has suffered dramatically from six months of Leo's bus being on time every morning, thereby eliminating my traditional garage-tidying window. So guess where some of the film crew set up shop? In our crapheap of a garage. YEAH! One benefit of being very very tired all the recent while is that, after a time, you just go with whatever needs to be done. But I still can't believe that people from whom I was in no position to demand a blood oath of silence spent time in that awful awful overstuffed space.

Also, I was sporting my infamous $5 haircut, which is exactly the cocker spaniel bob I specifically asked the stylist not to deliver. Alas. And I'm not really dwelling, because the way my house and I looked wasn't even remotely the point.

A few folks had an issue with a "cure" phrase that was used in the autism section preceding Leo's, by Boston's Dr. Howard Shane, who said,

I am leery of pairing the terms autism and cure. As I wrote in the forum that Jen Myers so thoughtfully posted on The Thinking Person's Guide to Autism Facebook page:


My family and I were featured in the iPad2 video, and I spoke with the crew at length about respectful language. I haven't seen the video itself yet, but my husband ... says that it was Mr. Jobs who made the cure-theme comment; ... says it was meant in a "we're surprised by how this is helping" fashion. However, it is my personal opinion that, as long as the term "autism" refers to the entire spectrum, and includes people who adamantly reject the term "cure," it is disrespectful to pair those terms.

The discussion is lively; I recommend you give the thread a read, and add your own comment.

I really believe the video rams home the message parents like me have been trying to tell to the public (and hopefully insurance companies and school districts) for almost a year -- the iPad brings revolutionary learning opportunities to kids like Leo. That autism and iPad message will now -- I hope -- enter the public consciousness. And perhaps more iPad placements will result.
at March 04, 2011