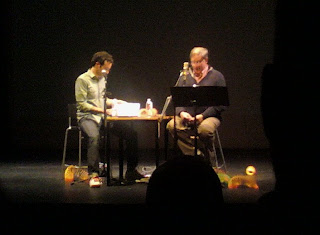 Last week, Seymour beat out all but one of his public media co-workers for a coveted ticket to Radiolab's San Francisco performance with Zoe Keating -- and, being an intuitive who can differentiate between supporting and enabling addictions, he gave his ticket to me. I spent Sunday evening sitting & chatting with fellow curiosity devotees, gleefully soaking in a live show that was every bit as good as Jad Abumrad & Robert Krulwich's audio performances yet better than you could possibly imagine.

And as I watched the show and took bad pictures with my not-smart phone's camera, I wondered -- what would a Radiolab show about autism awareness be like? Since Radiolab always surprises me, I can't say what they would do -- but I can tell you what I'd like to see:


I want to tell you a secret about Autism Awareness. Ready? Here it is:

Behavior is communication. That's it. That's all. That's everything.

If you put your mental backbone into behavioral awareness, into trying to understand why a person with autism, or a person associated with autism, behaves the way they do -- if you can make yourself truly aware of that person's needs -- then that is when the connections will happen, that is when you will make a difference, that is when awareness can leapfrog goodwill, and translate into real-world benefits and positive actions.

You need to remember that an autism label is just that -- a label. It can help describe your child, but it doesn't define your child. You need to set the label aside, enlist it as needed, and instead hyperfocus on what your child does, and why they do it. You'll probably have to jettison some lingering hopes and dreams about your child's future to focus on your child's reality -- but since parenting always involves a large amount of eventual ego-disentangling, assure yourself that you're actually ahead of the curve.

But, the behaviors! They don't always make sense, not on the surface, not if you've never encountered anything like them before. Does your child scream if they can't wear their favorite shoes? Can they talk happily (and indefinitely) about sprinkler systems or precious gems or superheroes? Do they enjoy fondling material of certain textures without regard for where or on whom that fabric may be located? Do they fear the toilet, the market, the dentist? Make understanding those behaviors the focus of your approach. Decide which quirks are quirky, and which are legitimate impediments to learning, self-care, health, and socialization -- then put your energies into helping your child get past the roadblocks.


I left home at 17, and spent what would have been my last year of high school in a tiny Japanese fishing village nestled among Mandarin orange groves on the shores of the inland sea. My comparatively trivial status as just a bit of an outsider explained my inability to fit in in the US or Japan, and was entirely predictable. All autistic people are to some extent outsiders wherever they go, so it never occurred to me I'd be accepted readily in Japan. I guess if I had thought it through, I would have seen flaws in my plan. A socially inept uber-individualist like me in such a heterogeneous, conformist society: not such a great idea on the face of it.

I was obviously an odd duck, but at the time no one knew autism explained much of my behavior. My hosts quite logically concluded that my strangeness was a result of my American upbringing. Untrue of course. My mother is not autistic. In fact she is an uncommonly gracious woman by the most rigorous standards of any culture. I was raised right, but developmentally delayed by autism -- it took me much longer than average to learn the simplest niceties such as greeting people and saying goodbye properly when I entered and left a room. Luckily, when I was finally capable of absorbing basic social skills, I had the privilege of living in the most polite society the world has ever known under the tutelage of people who showered me with amazing kindness.

I quickly reached my goal of becoming fluent in Japanese, as I had hoped, but I learned so many other skills I never even knew existed: that people and their feelings are usually more important than principles, so that sometimes an ounce of diplomacy counts more than a pound of the blunt indiscretion I called honesty. I learned about "Gaman," loosely translated as endurance, a quality I already had in abundance. But true Gaman is so much more than that, to merely survive is admirable, but to do so with grace and consideration for those around you is a higher value.


We talk with Dora Raymaker, an adult with autism, as she demonstrates via fluid and nimble AAC communication, why it is important to understand that difficulty in thinking and difficulty in speaking are not always paired, and why we must encourage the inclusion of people on the autistic spectrum in matters which directly affect them.


In the storytelling-taking-science-by-its-lapels spirit of our episode Tell Me a Story, scientist Emily Willingham asks, "So, where are we now? Now that we've made strides in shuffling off the burden of the biggest distractor of a global vaccine etiology, where does that leave the science of autism?"

Emily talks about how the science is where everyone should have been looking all along: in the genes. She tells us what to watch for in the science of autism in the coming years: copy number variation (CNVs), Mitochondria, specific genes, hormones, and epigenetics.

And that's what I'd like to see on a Radiolab autism awareness day show. I'm Shannon Des Roches Rosa, and I'll be opining on CafeMom all month long, as one of their designated Autism Experts.
at April 02, 2011