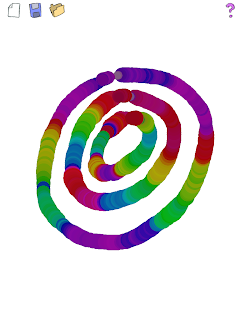 Have you seen the 2008 video of Baby Jonathan's reaction to his new cochlear implant? His double-take of surprise and delight is the closest reaction I've seen to Leo's reaction to the free app Singing Fingers, which lets our boy "finger paint with sound."

Leo adores music. Adores it. Like a lot of kids with autism, he can also use it to extend the length of his expressive and  communications -- i.e., he can say and repeat longer sequences while he's singing.

He also finds music immensely soothing. We sung him to sleep for years, we still play him pre-bedtime tunes on the pennywhistle. And we still use music to help him calm down and communicate when he's agitated, or help him get those stubborn, elusive words out (like many people with autism, his word retrieval skills short-circuit when he's upset).

For the last few months, Leo's been favoring a sung arpeggio. Sometimes we just use it to sing his name; other times, we'll sing the first part of a sentence, and he'll complete both the arpeggio and the statement -- often with those words that wouldn't perform for him in a non-musical setting. It almost always helps, or makes him feel a smidge better. It's the musical equivalent of a lovey or blankie.

And that is why he did the strongest double-take I've ever seen him give when I sat him down with Singing Fingers for the first time, and had him play with the painting above -- into which I'd recorded his eponymous arpeggio. I didn't capture that moment -- it happened so fast, and with so much more intensity than I'd anticipated -- but you can still see him going through and playing with the sequence in the video below.

Singing Fingers is one more example of creative app developers enabling kids to explore their strengths -- music in this case -- in ways I'd never imagined possible, without imposing a literacy or language barrier.  The app also encourages Leo (a sub-vocalizer like his mom) to project while talking and singing, because it requires a certain decibel level for the "paint" to take.