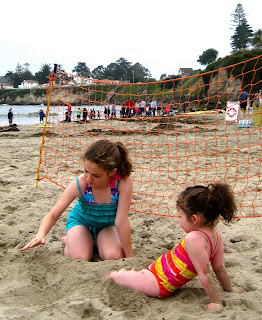 Mali is an imp. There is no pussy-footing around the label. Today's example:

Our entire family minus already school-bound Leo drove down the hill this morning, to get the girls to their camp bus and Seymour to the CalTrain. On the way, Iz demanded the iPad Mali was playing with. Mali was cooly disobliging in her uniquely needly way, which resulted in shrieks from her easily triggered older sister.

Seymour and I tried to talk Iz down, but she became locked in a cycle. And then, the worst: Without saying a word, and while her parents were engaged with her sister, Mali unleashed a Songify (spoken words to dance tune) track she'd been recording on the iPad: of Iz's shrieking.

Seymour and I should have told Mali that what she did was wrong and unfair, but we were paralyzed with suppressed laughter while tears ran down both our cheeks, and had to wait until the car's interior mushroom cloud dissipated before we were able to tell our youngest that while what she did was indeed funny, it was also  mean. Even Iz came around eventually, grudgingly, plottingly. I doubt her revenge will be as subtle as her sister's infraction.