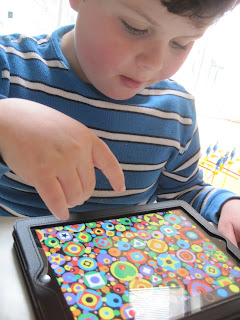 I've always loved how Leo's iPad is a social magnet, attracting kids and parents to him by virtue of its much-trumpeted-about coolness. But apps that actually encourage people to interact with Leo (for whom autism means language and social interactions are challenging) -- as opposed to apps where let folks stand by and watch Leo kick iPad app ass -- those are rare.

Spot the Dot ($3.99) is an exception, and an app I recommend heartily. When Leo plays Spot the Dot, bystanders from ages 3 to 73 flock to our boy's side, talk with him, and cheer him on. It's delightful to watch, especially since Leo's been having a rough time lately, with fidgety behaviors that sometimes make folks in proximity uncomfortable.

In Spot the Dot, the user clicks through a series of screens in which a single elusive dot must be located, a different colored dot each time. Spotting the dot get trickier with each screen, as the visual environment becomes more complicated. It's harder than it sounds, especially on that last, white dot screen! 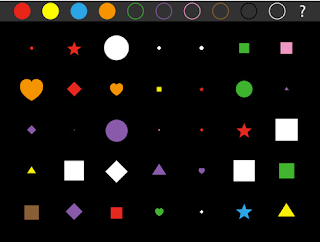 It's really fun to watch Leo use his excellent visual discrimination and pattern matching skills in varying environments. And he thinks the app is fun, too, as do all the folks who play the game with him, ask him if he can see the dot, ask if he thinks the dot is next to XX shape or XX color, and (even) beg him for a turn. These are the kind of interactions that, as an autism parent, I spend all day long trying to coordinate and cajole. But with Spot the Dot, they're happening spontaneously!

Spot the dot also exemplifies good, solid, simple, powerful app design. Literacy is not necessary -- users can click to any screen at any time by selecting that same-colored dot from the bar atop the screen. Every dot's screen has an intro with both text and voiceover direction that tells the user to "Spot the XX dot," while the "o" in the word "dot" is the dot color in question. Leo doesn't need help to use the app, which I always appreciate.

Disclosure: Ruckus Media gave me a promo code for Spot the Dot, two months ago. But, as always, I only write about the apps I feel make a difference or are worthwhile for Leo and our family.
at July 24, 2011