I wouldn't mind waking up to this view every morning. It's standard stuff at Treebones, the southern Big Sur yurt-lovers' mecca where Seymour and I spent our 16th anniversary (you can see some of the yurts in the upper left corner).

And I wouldn't mind seeing California Condors again -- in a once-in-a-lifetime bird sighting overload, we came across 12 condors in 20 minutes. Seymour, life-long birder, did a happy dance when he spied eight of them just north of Point Sur. Then we saw another group over Bixby Bridge and he almost fell over. We did try to let a few of the understandably Bixby Bridge view-spellbound tourists know how privileged they were to see these rare, rare, wrested-from-the-brink-of-extinction birds, but mostly met with the tight smiles recognized by enthusiasts of all stripes. Fuck those tourists, man. WE SAW CONDORS, YEAH!

And I'm grateful for every moment spent and every moment I'll get to spend with that man of mine, whether he's gifting me decapods of unusual size, 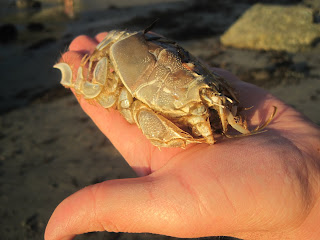 Agreeing that yes, this seaweed bit and its shadow do look just like a giant squid atacking a sperm whale, 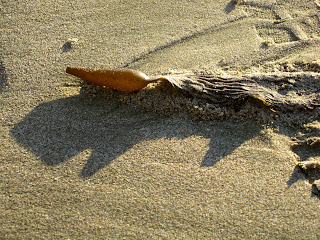 That found seaweed arrangements can be exquisite, 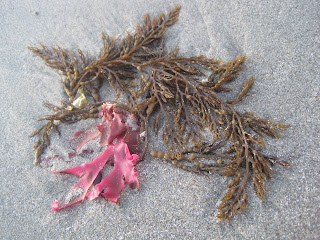 That evidence of metamorphic geology should be fondled when possible, And that life should be lived with gusto, appreciation, and approached with constant curiosity -- while keeping one's eyes open for Perseids (we saw several on our clear moonless star-spangled nights), condors, and all the miracles that surround us in Big Sur and elsewhere -- as long as we're paying attention. 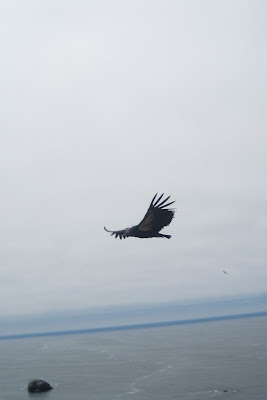