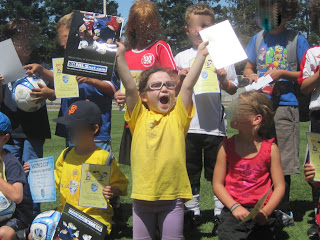 Our girl is so much fun -- and so much work. Consider this photo: This is her at last week's soccer camp. This is her reaction to winning "Wackiest Player" during the final day's award ceremony, for her Pirate Kitty Soccer Princess getup. When she got up to receive the award in front of all the parents and all the campers (and a very, very, very patient Leo and Iz, both of whom made it through the entire 30 minute ceremony with minimal complaints), her reaction was not the "thank you" that has been modeled and prompted and used for most of her 6.5 years, but a swanningly dramatic and rather entitled "FINALLY!" (The earth declined to swallow me up, much as I begged it to.)

She has spent most of her first week of school being a spy, laying out a stealth-friendly (all black) wardrobe, plus notebook and pen on official Spy Days (MWF). This idea she came up with on her own, though I have since downloaded Harriet the Spy, and we are listening to it in the car -- which I am now thinking might not have been a great idea as Mali is a little too intrigued by the idea of a spy route and listening at doors. However her school spy routine is on hiatus for now, as her first attempt at enlisting a confederate did not go well -- said confederate went rogue and promptly revealed Mali's spy plans to all the potential victims (the principled little weasel!). Plus Mali lost her notebook (which, thankfully, did not have her name on it -- she was crafty enough not to make that mistake).

Her "high-spiritedness" has already come to the attention of her teacher -- by the time I introduced myself to Maestra Atmósfera today,  she let me know -- very pleasantly -- that she had already consulted with Mali's previous teachers about best practices for handling our girl. And that Mali had already spent time at the "Thinking Desk." Sigh.

But not all is amiss at school. As we walked across across the campus and back to our car, children and adults kept calling out to her, saying goodbye or wanting to make plans. She turned to me and said with satisfaction, "Everyone here LOVES me!" I told her that must feel great, but that it's important to deserve and and reciprocate that love. We are definitely reading A Little Princess next.

And her very first piano lesson with the kindly Ukrainian piano teacher who has always doted on her went well. Mali's hands are small but strong, and she has an innate sense of rhythm. (Iz, whose spot Mali took over, has graduated to the more serious Russian instructor, as did her life-long friend Merlin). I was worried about Mali being defiant or grumpy, but perhaps her love of music (and love for the instructor) will prevail.

I don't know what we'd do with dull children, but sometimes I feel like we're living the parenting version of that never-actually-authenticated-as-Chinese proverb: "May you live in interesting times."
at August 25, 2011

Email ThisBlogThis!Share to TwitterShare to FacebookShare to Pinterest
Labels: parenting