Leo loves beads. Loves them. Especially if they are on strings, and he can rub them in his hands and make them click and clack.

So imagine his delight upon walking into a specialist's office and finding a lovely looped string of beads waiting beside the examination table! He was in heaven. And the doctor was nice, she didn't make him stop playing with them during the exam unless she needed his specific attention -- until the end of the exam, when she said she actually needed the beads, because they were in fact a medical tool. One I'd never heard of: an orchidometer. It's used to estimate testicle size, to determine developmental stage among other matters. In Leo's case, to evaluate whether or not he's officially in puberty

Leo has been seeing a lot of specialists right now. Some due to the seizures & anaphylactic reaction a few months back, others because he had a big reaction to some bug bites at the beginning of last month and we're still trying to figure that out too.

But mostly, he's seeing specialists because we're lucky -- Leo's pediatrician is an awesome doctor who wants to ensure that -- since Leo can't always tell us what's up and how he's feeling -- everything of his is working and developing the way it should. This is especially important as puberty looms, what with our boy being twelve and all.

And as it turns out, the specialists have found a few things that need attention, such as monitoring the amount of sugar in his diet. So all these medical office visits have been a good thing. And have led to the discovery of new playthings.

I wonder where we can get an orchidometer for Leo's personal use? Those were some excellent beads.
at May 31, 2013 3 comments:

Leo takes hundreds of selfies on his iPad. This is definitely my favorite of his sequences so far.

In Which Mali Knows What a Pilum Is

Today Mali made a major word score on the SpellTower app with 'pilum,' which is a Roman javelin. "I know about this because I read so much mythology, Mommy." (So did I. Also a lot of Roman-centric Asterix the Gaul comics. But I still didn't know the word.) 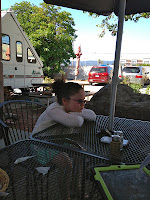 While we were waiting for Leo's bus to arrive, we did an SAT vocabulary quiz on my new iPhone. She got 15 out of 20 correct on her own, through knowledge or deduction.

Also while waiting for Leo, we had the following exchange:
Did I mention that she's eight? And that ... she did not test into the local GATE program? Multiple intelligences, folks; multiple intelligences. One more reason I'm glad she's in a language immersion program instead of one of the more test-centric schools.
at May 23, 2013 1 comment:

"Take off your cape and just be a friend." 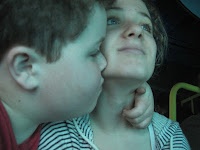 Please read Don't Be a Hero. It's an important essay on why folks who work or volunteer with people with disabilities need to rethink that pervasive Hero mindset. Excerpt:


"Imagine learning that someone befriended you with intentions of putting it on their résumé as volunteer experience or merely to pat themselves on the back. What if your friend accepted your social invitations “out of the goodness of their heart?” How would it feel to know that what your “friend” gained from your relationship is the righteous feeling that they were doing you a favor? Would you feel like you were experiencing an authentic interpersonal relationship? I’d imagine not. I’d imagine you’d feel used, cheap and deceived."

I'd rather see folks with Iz's attitude. She went to a sibling camp with Leo a few years ago, and keeps asking when the next one is going to be. I told her she was getting old enough that she might be able to work at the camp soon.

She was excited, and said, "That would be great!"