Self-Pity Is for Suckers: My BlogHer14 10x10 Project Talk

This is the prepared text from my BlogHer 10x10 speech. Which went well, I think. I did go off script a bit but this is the core.

Update: For extra punch, see the official LiveBlog of the entire opening keynote, and Liz Ditz's enhanced Storify version of my talk.

Hi. I’m Shannon, I’ve been blogging since 2003 at Squidalicious.com, since 2009 as a BlogHer Contributing editor, and since 2010 as an editor and contributor at Thinking Person’s Guide to autism. I’ve got three kids, they’re cute, all that.

My middle child, Leo, is 13, and has always been my dude. He's sassy, handsome, and still a snuggler, lucky me.

I let the Internet break me and see my Leo as broken. I embraced self-pity. I let it define me. I was not alone; at the time there were plenty of other prominent autism parent voices in the Blogosphere who were floundering right along with me. You want to talk about a pity party? We live blogged it.

But then the Blogosphere shifted. I started encountering parents who rejected the pity and the suckage. Some of them got in my face and told me I was a jerk for embracing self-pity, that I wasn't helping anyone with my Woe Is Me gospel. I wasn't ready for that. I'll admit it -- I recoiled, petulantly. And I blogged about it.

And then my Blogosphere shifted again. I started hearing from people who told me I needed to reject self-pity so I could get to work, because Leo and I had a tough road ahead and no one else was going to help us. I went to Catholic school, so I am always ready to get behind anything that smacks of martyrdom -- I blogged about that, too.

Then the Blogosphere shifted, yet again – and I found the people Leo and I needed. I found the autistic bloggers, who love, support, and accept my son – whether or not I ever manage to wipe that self-pity out of my eyes and see Leo clearly as the fabulous & unique person he is, and not as a pile of deficits. The blogosphere connected me with autistic people, parents, and professionals who told me that seeing autism as suckage was seeing my son as suckage. That he deserved better than a mom who saw him as broken and as breaking her life. And that is what I blog about now.

I can’t deny that autism comes with some suckage. Autistic bloggers don't deny it, so I can't either. But the hardest things about autism are hardest for Leo. Please believe me when I tell you it’s a much bigger deal to be the person who can't speak than the mother of the person who can't speak. And anyhow, being able to speak is not the same as having something to say. Communication takes so many forms, all of them valuable. The Blogosphere taught me that, too.

Rejecting self-pity keeps me focused on Leo, keeps him in my sights as an awesome and deserving human being. Who has a mom who now tries to believe in herself as much as she believes in him. Who now knows self-pity is for suckers who haven't invoked the full power of the Blogosphere.

I’m not saying people don’t have hard times. They do. I have, you have. But, damn, is it so much easier to get through those rough patches when your blogging connects with people who get it, and who care. And that aspect of blogging – the life-changing power of our beautifully networked hearts and brains – has only grown stronger over the past 10 years. Blogging formats may have diversified, but blogging itself still matters, so much.

The funny thing about me being here, talking to you, at this event, is that I’m not great at most Good Blogger practices, like strategically generating traffic and engagement. I suck at commenting. I’d slam my head in a door before I’d let anyone drag me into a conversation about branding. I don’t know how to blog about any thing other than my sucker of a self and my three kids and my own little bubble of things that matter to me.

And yet. Through being myself, blogging my truth, and making organic, real connections – I’m a published author. I’ve co-edited three books, including Thinking Person’s Guide to Autism. I’ve never stopped learning, and I've tried to give back by helping to build an ever-growing online community of 87,000 autism parents, autistic people, and autism professionals who flock together and learn from each other, daily. I’ve given interviews and talks on autism, iPads, blogging, and vaccines for all kinds of national and international news outlets and organizations, I recently guest-lectured at UCLA, and -- alongside many people in this room -- I stormed Capitol Hill for the UN Foundation and Shot@Life in support of global vaccines. It’s all kind of odd, really.

But a decade of blogging made it possible for a dweeb like me to do all that. It made it possible to find my people again and again and again, to read your stories, to gleefully message for hours with friends I’ve never met IRL, and to knit IRL friendships of choice rather than of proximity. It helped me learn to ride the wild life I’m living, and not obsess over some imaginary life that only suckers dwell on.

Don't be that sucker. And know that the people in this room and in the Blogosphere won't let you. 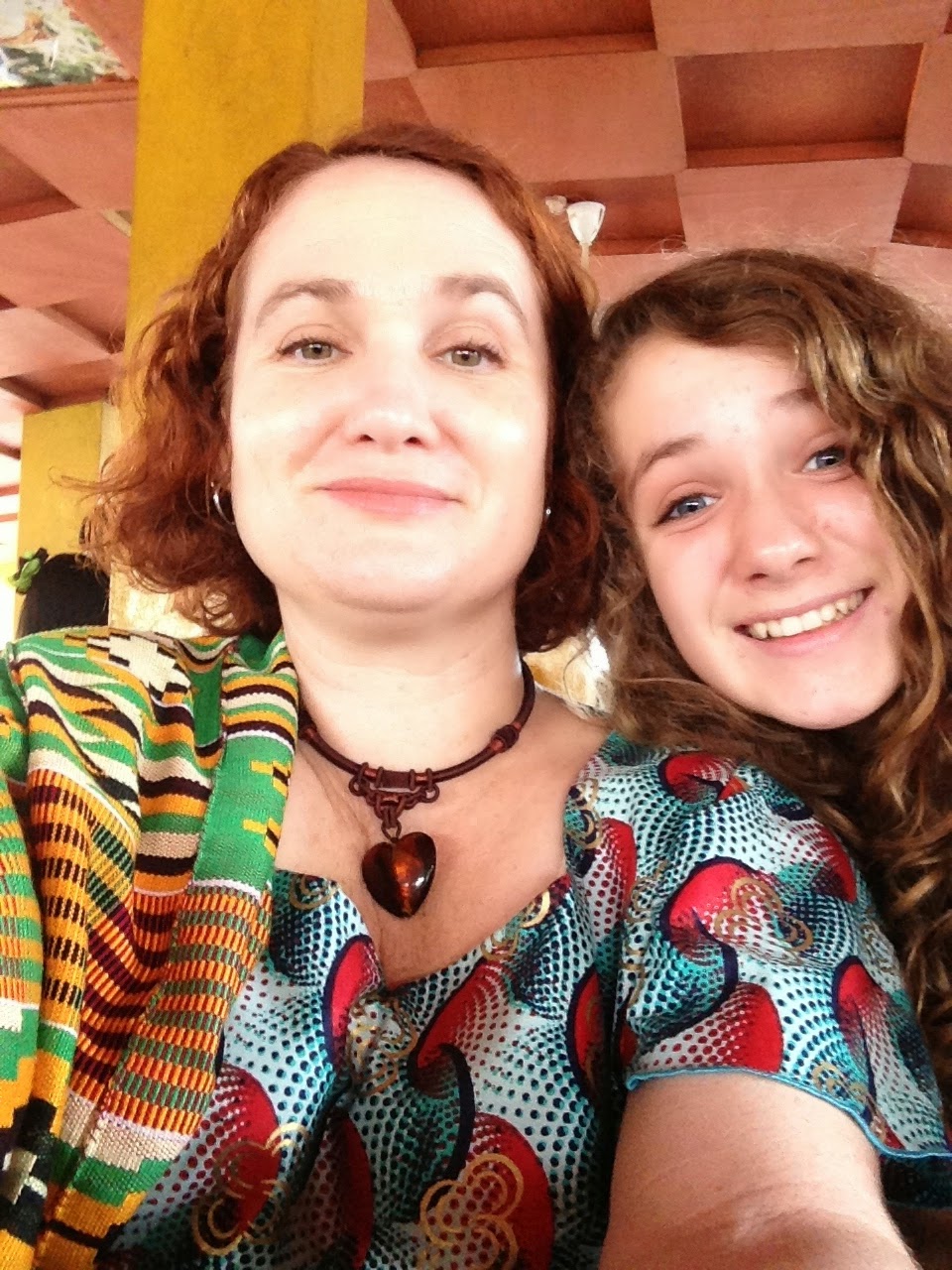 And here's the story about the dress I wore during the talk. Last summer, when Iz and I were in Ghana, we were invited by our Ghanaian hosts to a family wedding. Which was a huge honor. However, we only had our goofy Travelsmithy-style wardrobe available. But our hosts said: NO WORRIES and had their unbelievably talented seamstress make us custom dresses -- in 24 hours. We wore them to the wonderful wedding. However mine only fit perfectly when I was standing -- when I sat down in my wedding seat and turned to greet a new friend, my cleavage made the zipper on the back of my dress explode. My host, generously and ingeniously, gave me her kente sash to wear over my shoulder and down my back so no one else could see the back of my industrial strength and therefore extremely hideous bra. And then we went home and the seamstress fixed my zipper. And now it is my favorite dress that I wear for good luck whenever I can.