Mali and the Mathematics of Fibbing 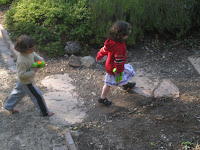 Here's Mali and her friend Trinian, off to shoot dragons and eleven-year-old boys during her friend Merlin's birthday party.  Look at that determined walk -- she had absolutely no fear when it came to battling the older kids with her mini-Nerf gun.

"No fear" has always been her standard operating mode. It's served her well for almost five years. As have bravado and enthusiasm. But she's almost five, she's becoming more tuned into social dynamics, and she's starting to change.

Example: She is starting to fib. About anything. About nothing. When it really doesn't matter. Why? I suspect she's had an epiphany similar that of Ricky Gervais in The Invention of Lying (an excellent and original film, though it fails the Bechdel Test), in that people will believe any reasonable statement, so why not say something that gets a reaction? Like saying she's allergic to bees? Or peanuts? I suspect and hope it's a phase, and am running interference where necessary.

She does not like not being the center of attention. She spends her entire soccer game ("game" possibly being too organized a word) stomping around the field, looking at the ground and scowling as the ball and the rest of her team whizz by. (The coaches, thankfully, mostly ignore her non-sporting behavior.) And she hates the after-care dance class at her school, possibly because there are so many other kids.

I would like her to find an outlet for her energy and coordination, and brought up the possibility of a martial art to Seymour, but he doesn't think it's a good idea for her to learn combat skills. Maybe tap or jazz dancing? I would like to find an activity she likes, that also taps her natural rhythm and energy.

She was out of school for two weeks in the middle of October -- one of the many benefits of her year-round school calendar. What a delightful opportunity for us to bond, given that my youngest is fast approaching five and her souped-up version of four years old is so much fun? 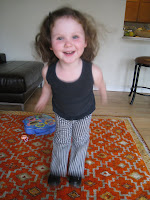 Well, no. I work now. Whoops. I forgot about her upcoming break when I took the job. But I had a plan! I would finish almost all of my work at night, and hang out with her during the day, devotedly.

This plan sort of worked on her first day of break, which was also my 40th birthday and so an excuse to cajole her into a Mini-Me outfit complete with houndstooth check pants. She came with me on errands and we may have even read a book, though I remained preoccupied with my new schedule.

And then we came home from that day's school pickups and errands to find my mother in my house, even though I had talked with her just the day before about how much she was continuing to enjoy her family visit to Vancouver. Seymour had imported her as a birthday surprise! I was so very much beyond surprised that I ran around in a little circle instead of bounding over and hugging her, which she probably would have appreciated a bit more. But yay! 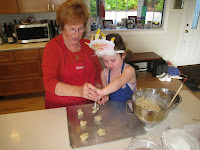 If I was happy to have her visit, Mali was even more so. Our poor third child is a social beast like her grandmother and unlike her  mom, so what a treat to spend the first week of her break playing, baking, dressing up, reading, painting, coloring, and talking talking talking with her beloved grandmother. It was also a relief for me -- I was able to shift some work hours to the day, without feelinglike I was abandoning Mali. 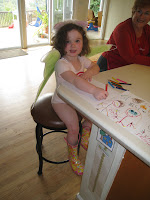 I think Mali wore five different outfits each day while my mom was here. My mom put makeup on her, too, which Mali thought was so dandy that she helped herself to the makeup the following morning. Her version of "eyebrows" (her natural brows, like my mom's, aren't visible) was hit-and-miss, but she put on the mascara perfectly. I still can't do that.

Eventually, and after Seymour, my mom, and Jennyalice threw me a surprise birthday party so fabulous that I'm still pinching myself, my mom left. Then it was just me and Mali again during the day. 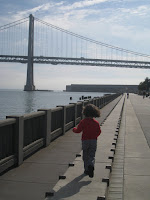 I can't say I balanced work and parenting perfectly during the remainder of her break, but we did have a good time, including a trip to San Francisco during which she charmed the cupcakes off the Ferry Building vendors, ran most of the length of the Embarcadero, made friends with or totally irritated half of Seymour's co-workers, and surprised the patrons of Coffee Bar by being a child (love that place, but it is deadly grown up-serious). Did you know that My Little Ponies have magnetic feet that work really well on metal staircases? 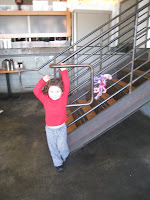 I love this kid. I want her to stay just like she is, right now. I worry that I underestimate her, given that she's the third kid and I already taught Izzy and Leelo everything and won't remember what I need to revisit for her, or pay enough attention to where her mind is at. Recently I was wondering if she understood counting and one-to-one correspondence because she kept asking me what 1 + 1 and 2 + 2 equaled, but then after I teased her by answering "6" to "What is 1 + 2?" she looked at me witheringly and said, "No, Mommy, it's half of six." So I guess she gets what to do with numbers.

I hope I continue to get what to do with her, how to help her remain such a  treasure, even as she repeatedly experiments with pushing our buttons. She is one of the best things that has ever happened to our family, and that is a sentiment that needs to be on the public record.