We have a full house for Thanksgiving. My mom, her dog, siblings, nieces, friends. Support for Leo. A turkey in the fridge, a bag of potatoes, and some fresh cranberries. Not much planned beyond that. Not worried about it. It will all be fine. More than fine -- it will be fun. Or it had better be, because I recently wrote a post for BlogHer about how we're planning a reasonable holiday season. No pressure!

Here is Iz (photo by Barak Yedidia). She is not a little kid anymore. She cares about fashion though not to an irritating degree, yet with an understanding of how to put outfits together. She is smitten but not giddily so with a cute boy at school. The boy likes to hike and talk about science just like her -- dreamy. Oh, and he's totally open about his Asperger's.

She got her first letter grade report card last week. Her math grade was a C+, which was surprising. I told her that grades weren't all that important now, and that as long as she's keeping up with the comprehension, the study skills and top grades will come -- and that maybe she missed turning in an assignment or two (characteristic first trimester behavior for our girl). She insisted that she turned everything in, so I advised her to go talk to her teacher. She did, and a couple of days letter I received an apologetic email from that gentleman, saying that he'd misrecorded Iz's assigments, and that in fact she had an A+ -- the highest grade in her class. Heh.

She is a kicking butt at soccer and is really into it -- she wants to win, yes, but she's mostly interested in improving her skills. Seymour has been taking her down to a local field and teaching her technique, and she's been talking soccer every chance she gets with her Portuguese grandfather, who was a college soccer recruit. Soccer is teaching her the kind of patience she otherwise still struggles with at home (unless she's working through increasingly challenging levels on World of Goo). Without going into details, and while reassuring readers that we practice non-violent parenting, I relate the following exchange:


Squid: "I cannot be in the same room with her right now. I am too exasperated. *Sigh* How do you think Gandhi would parent a girl like that?"


Seymour: "I think he would beat her with a spindle."


Mostly her problems are topical perseverations (what would be called nagging in a typical family) and inability to back away from an argument, and our responding to her even after we've declared a subject closed. We will now follow through on those declarations, and not respond to her relentless rephrasings until she changes the subject in a non-loophole manner. I'll report back.

She does demonstrate a lot of love and empathy and thoughtfulness and consideration for others. Some of that is teaching, most of it is the core sweetness of a good kid. It makes her daily screeching sessions bearable overall, though rarely in the moment.

Last week's birthday boy is doing well with his food tolerance -- I got him to eat a couple of carrot sticks by using M+M chasers, and am optimistic. He makes a disgusted face with every carrot bite, but he did that with apples too, last year. Now he eats apples voluntarily and requires no bribe/reinforcer. Carrots could happen.

He has taken to scavenging through the girls' lunchboxes when he gets home. I don't mind as he uses great language in asking permission at every step, and it's a very engaged social activity that he enjoys. Usually he finds a sandwich crust or two. Yesterday he found an entire half sandwich, out of which he took two enormous bites before I could stop him -- because it was not the standard PB&J, it was tuna fish. Poor Leo who only eats six bland things and never any flesh! He retched but waited until I got a plate to spit it out. Then he asked for lots and lots of water.

He has also been eating homemade garlic bread, which by itself is not terribly nutritious or exciting -- but he's been letting me dip it in increasingly large puddles of tomato sauce beforehand. This, also, bodes well for a potentially expanded diet. Which in turn bodes well for restaurant options and socialization and his happiness, as he will not need to stress out about whether or not his preferred foods are available.

He's still having an accident of the stenchful variety, almost every day. His teacher and I are frustrated. Control doesn't seem to be the issue (he demonstrates excellent control all the time) so Supervisor M and I think it might be behavioral. We will step up the positive reinforcement and attention, and not engage/give eye contact but absolutely have him clean up too during incidents. He's capable of being very independent, and I want him to have the satisfaction that comes with self-care, even during less-than-ideal circumstances. 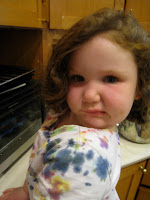 And here is Mali. She will be five tomorrow. Our friend Badger helped her make the cupcakes for tomorrow's classroom birthday happy time.

Seymour is thrilled that I caught her "Doink?" face and posture. She does this a lot. It is part of the ongoing amusing drama.

She keeps helping herself to lunch at the school cafeteria, saying that "it's free!" Telling her not to do it is not working so far. We may have to put her poster up in the cafeteria with the caption, "Do not give this child food!"

We've realized that Mali's diet is not a whole lot more varied than Leo's. So I've been having her join Leo's food tolerance sessions. She did eat most of a carrot stick along with her brother. I don't know if we'll ever get back to her "tabbouleh baby" openness, but more green and orange foods are needed in her diet. 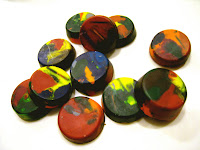 Two days ago she got the payoff from several weeks of "accidentally" breaking crayons: recycled crayons! Made in mini-muffin tins. I think they came out well, don't you? She and Leo both enjoy using them, as they're easy to hold, and the colors change as you draw.

Her writing suddenly became legible last week, also she started writing out words spontaneously (she's been reading for months, but her writing has been messy and minimal -- as is developmentally appropriate). When she handed me the 50th picture she'd drawn of me wearing a tiara with purple jewels, I noticed a difference: A dedication. She'd very neatly written, "To Momy, from Mali."

She likes books about animals, and Fancy Nancy. Her latest literary treasure is Percy the Perfectly Imperfect Chicken (a review of which is listed on ye olde review blog), but she is also taken by the Fancy Nancy series -- which makes sense, as our sparkly gold and tiara-wearing dress-up lover practically *is* Fancy Nancy.

Probably the funniest thing she does right now is read name tags and greet all grocery store and Costco employees by their first name. And that's the last thing you'll read about Mali as a four year old.
at November 25, 2009